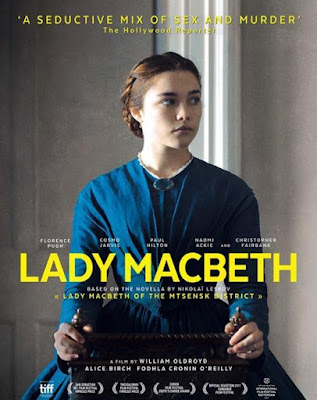 The extraordinarily round-faced Florence Pugh, a relative newcomer last seen in Carol Morley’s sensuous psychological drama The Falling (2014), delivers stellar performance in her recent outing as Katherine, an impassioned young woman trapped within empty marriage in Victorian Era England. Katherine in William Oldroyd’s Lady Macbeth (2016) is first seen during her initiation into life long imprisonment, also termed as marriage arrangement. Her beautiful, decorous face is partially hidden behind a bridal veil, signaling the upcoming existential suffocation. Katherine is locked within Oldroyd’s picture-perfect symmetrical frames, her impassive stares conveying the stifling atmosphere. The camera begins to actually move only when she experiences fleeting moments of freedom and when her sexual desire is awakened. Based on Nicolai Letsov’s 19th century Russian novella ‘Lady Macbeth of Mtsensk District’, the script for the film was written by feminist playwright Alice Birch. The novella has already been made into a movie and has its own ballet & opera versions. The opera premiered in Moscow, 1934 later received a scathing review from Stalin himself for the material’s alleged subversiveness. William Oldroyd and Birch’s adaptation with its austere visuals, static shots and subtly ironical observations takes an approach opposite to that of opera or theatre. Consequently, the director-writer duo alongside actress Pugh channelize their talents into this well-known narrative of adultery, murder and patriarchal brutality and turn it into a crackling examination of women’s predicament in domineering man’s world.

The plot is set in 1865 and the location is moved to isolated northern areas of England. Katherine is married (or sold off) to Alexander (Paul Hilton) who is twice older than her. The marriage seems to be a strict financial arrangement as a plot of land thrown in to seal the deal. Katherine moves into her husband's ancestral country home where she remains cloistered and demanded to fulfill a wife’s ‘duties’. Alexander, however, has no intention to meet his marital duties. In his own way, he defies his despotic father Boris (Christopher Fairbank) by showing no tenderness or passion towards Katherine; she becomes a humiliated pawn in father-son’s power game. Boris’ scrutinizing attitude further burdens Katherine with more rules. She is not allowed to sleep before her husband and forced to remain perched daily for few hours in the sitting room. So Katherine doesn’t feel bad when husband and father-in law are called away on business. Ordered to stay within the mansion, Katherine breaks the condition by walking around the misty and vibrant moors. 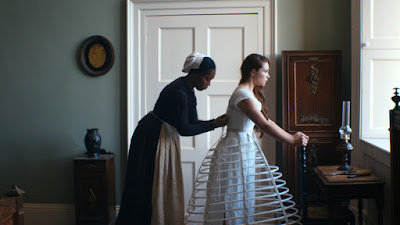 One day her attention is turned towards stable and she intrudes upon the sexual humiliation of a terrified black servant Anna (Naomi Ackie) under the hands of seemingly cruel, half-breed groomsman Sebastian (Cosmo Jarvis). In order to free herself from literal and figurative imprisonment, Katherine however strikes up a passionate affair with Sebastian who foolishly thinks he’s the one controlling their sexual power dynamics. Initially, he forces himself into Katherine’s room, but gradually the rage and desire for freedom that drives Katherine allows her to dominate over the farmhand. Her moral compass becomes murkier and the palpable sense of humanity gets eroded amidst patriarchal dominance and boredom. Anna, a mute spectator, is the only witness of her lady’s shocking turn towards immorality and in a way she remains as the embodiment of Katherine’s troubling conscience. The escalating acts of cruelty may raise questions of psychological plausibility, but the ever-shifting power dynamics within the house is portrayed in complex manner and naturally teases our empathy for the ‘wronged’ protagonist. 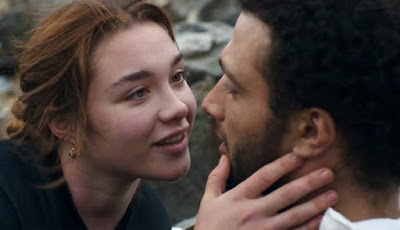 The rigid framework of marriage and the ensuing act of yearning and self-assertion in the form of adultery has been one of the recurring themes in 19th century American and European literature. Unsympathetic bourgeois society, sexually unappealing husbands, women’s doomed romantic desires are the basic devices of these literary descriptions. While Oldroyd and Birch’s interpretation of Letsov’s novella isn’t exactly revisionist in its approach, the narrative is fraught with themes of racial politics, social privilege and class conflict (they don’t commit the usual mistake of whitewashing costume dramas). Of course, the narrative could have been more profound if it had perfectly used the unspoken tension between Katherine and Anna, instead of rising labored questions about social disparity. Director Oldroyd, however, comes off great when exploring Katherine wilful chase for independence down the bleakest path. His visual style (cinematography by Ari Wegner) orchestrated with symmetrical, static shots and few close-ups brilliantly captures the transformation of a naïve bride to manipulative and malevolent feminine force. Oldroyd and writer Alice Birch also weaves the crime and its consequences without bringing upon strict judgment on the characters. My favorite visuals in the narrative are the shots that capture Katherine’s oppression and tedium inside the claustrophobic setting of undesirable marriage (the shot of Katherine lying down in sitting room's sofa almost resembles a great Renaissance-era painting). In classic novels like Gustav Flaubert’s Madame Bovary, the subject of boredom in bourgeois household becomes a vital element in setting up the events. Mr. Oldroyd and Wegner splendidly capture Katherine’s ennui which changes the nature of her soul. The casting is more than perfect. Florence Pugh, with her wide eyes and arrogant display of beauty moves like bundle of energy, effortlessly slipping between the roles of wronged and wrongdoer. She keeps us fascinated throughout her small rebellions and rattles us by the burgeoning display of wickedness. Moreover, Pugh and Naomi Ackie’s performances smooths out the unconvincing or rough-edge elements of the plot.