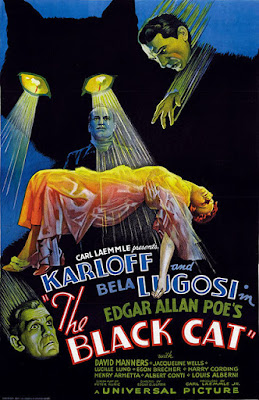 Universal Pictures, one of Hollywood’s oldest and most famous studios, played a predominant role in molding American horror cinema genre, between 1920s and 1950s. BFI’s article on Universal horror flicks divides the era to four phase, starting from classic silent films (The Phantom of the Opera, 1925) to Gothic horrors of early sound era (Frankenstein, Dracula) to morbid monster movies in 1940s (The Wolf Man) to the Cold War era sci-fi horrors with dreadful extraterrestrials. Although the alleged B-grade production designs and hammy performances of these very old horror movies are often drawn into criticism, one can’t deny the brilliant atmospherics and wit featured in Universal’s horror. The B-grade values also do provide some campy fun. Frankenstein’s Monster and Count Dracula became the most popular cinematic figures in the history of American horror cinema. The actors Boris Karloff and Bela Lugosi who respectively played these iconic characters went on to become huge stars, boosting the golden run of Gothic horror. These two biggest icons of the genre came together to share their screen space with Edgar G Ulmer’s bizarre and outlandish The Black Cat (1934). This is said to be first of the seven joint appearances and the stars had an amicable professional relationship.

The opening title of Black Cat is accompanied with words ‘suggested by Edgar Allan Poe’ (very loosely connected with Poe’s tale). Director Ulmer later admitted they added the literary giant’s name to draw in audiences (and Black Cat happened to be biggest hit of Universal in 1934). Austrian-American film-maker Edgar Ulmer is known as great stylist of the early American B-film. He has worked in wide variety of genres and the noir drama Detour (1945) was considered to be his best work (Detour is a must-watch gem among Noir cinema). Before moving to America, Mr. Ulmer has worked with influential silent-era German film-makers like Fritz Lang and F.W. Murnau (in Hollywood, Ulmer has worked with great Austrian-American filmmakers Billy Wilder and Eric Stroheim). So its understandable how the elaborate sets in Black Cat, with its geometric precision, reflects the splendid aesthetics of German Expressionist-era cinema. Director Ulmer co-wrote the script with Peter Ruric (pseudonym for George Sims) who has freely borrowed ideas from early silent-era horror movies. 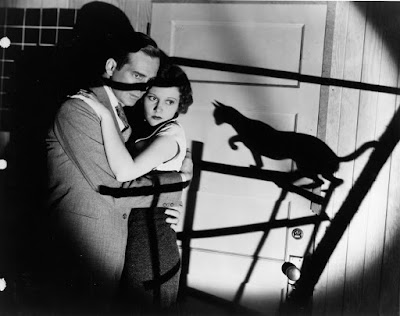 Newly weds honeymooning in gloomy Eastern Europe, intimidating stranger, accident, dazed women, mad villain with a ludicrous name conducting Black Mass, Black Cat possesses all the antiquated elements of early horror cinema. The film opens with newly wed Joan and Peter Alison (Jacqueline Wells and David Manners) going on a train journey to a remote mountain hotel in Hungary. Circumstances force them to share their compartment with Dr. Vitus Wedergast (Bela Lugosi), who has spent last 15 years of his life in a Russian prison. The initial set-up with closer look at Joan’s distressing emotions reminds of the opening scene in Lang’s early silent masterpiece Destiny (1921), where the newly wed couple traveling in a horse cart around the countryside is accompanied by a mysterious stranger. On the way to their hotel, the vehicle crashes and Joan is injured.

Dr. Wedergast takes the couple to the weirdly designed mansion of his old friend Hjalmar Poelzig (Boris Karloff), an Austrian architect. There the doctor treats Joan and advises Peter to spend the night at the mansion. Dr. Wedergast has of course come to meet Poelzig to settle old scores. In the First World War, Poelzig has turned against Wedergast and thousands of his countrymen by betraying them to Russians. In fact, the gloomy bungalow is built on top of a fort destroyed in the battle between Austrian-Hungarian army and the Russians. Dr. Wedegast who is shown to have an irrational fear of cats (doesn’t serve much other than to justify the title), possesses a more personal reason to take revenge on Poelzig. Wedergast’s wife and daughter have supposedly succumbed to devious charms of Poelzig and he wants to know about their fate. Necrophilia, serial killings, human sacrifice, black mass, drugs, Poelzig’s deviance expands by each minute. And, as predicted the American couples too get embroiled in Poelzig’s penchant for perversity. 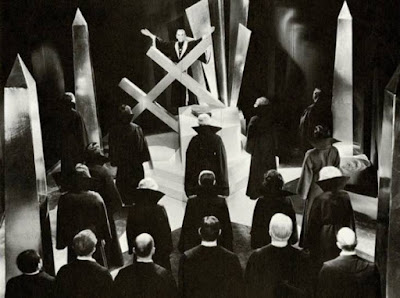 Plot-wise, The Black Cat is cockeyed and muddy. But many of the scenes standout due to vigor gathered from the screen pairing of Lugosi and Karloff, and due to Ulmer’s mesmerizing Gothic compositions. Director Ulmer and art director Charles D. Hall impressionist architecture brilliant embodies the savagery and evilness of Hjalmar Poelzig. In most of the scenes in second-half, Ulmer generates tension by the camera’s interaction with the dazzling architecture. Ulmer’s camera movements at times echo Lang (of Destiny, Metropolis) and Murnau’s (Nosferatu) aesthetical values. Like the great German film-makers, Ulmer also makes better use of mirrors, reflections, concrete walls, and staircases. The breathtaking images of satanic ceremony and collection of dead women preserved in huge glass cages easily overshadows the other meticulous compositions (for its time, the movie was considered very dark and studio demanded certain cuts). 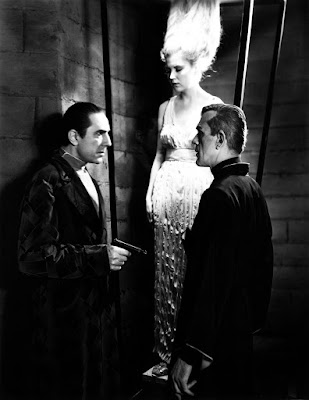 Edgar Ulmer also finds little space to make his commentary on the Great War and the ensuing Nazi menace. The metaphorical interpretation of Poelzig building his artiest modern mansion on the brutal ruins of the past is very apparent. When Poelzig talks of hideousness of the past, Dr. Wedergast replies, “There is still death in the air. It is just as much undermined today as ever”, may be indicating to the gradual rise of Third Reich. But Black Cat doesn’t take itself very seriously and doesn’t promise the viewers any profound allegory about the Great War. It’s just a strange mix of then irresistible elements employed in horror genre. After the explosive climax, the epilogue interestingly self-mocks the implausibility of the plot. Despite the worn-out plot mechanics, the two horror icons efficiently battle it out on-screen. Bela Lugosi’s exaggerated English diction (the way he pronounces ‘Kurgaal’ is enchanting) and Karloff’s depraved stares are the high-points amidst the campy narrative.

The Black Cat (65 minutes) is a must watch flick for the admirers of expressionist horror and fans of Boris Karloff & Bela Lugosi. The impeccable mise en scene and the hyperbolic performances mildly transcends the inherent campiness of the plot nature.