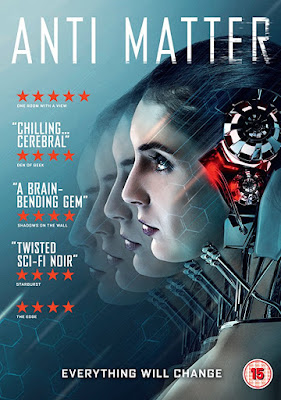 Shane Carruth’s $7,000 indie movie Primer (2004) demonstrated how a minimalist approach and sprinkling of actual, complicated science could lead to an intriguing sci-fi premise. Even before Primer, there were micro-budget sci-fi films like The Fly (1986), Gattaca (1997), Cube (1997), Dark City (1998), Existenz (1999), The American Astronaut (2001), Cypher (2002), etc which not only delved into complexities of modern scientific discoveries, but also opened up philosophical questions about the human condition. The cult following of Primer has elicited production of similar hard sci-fi flicks (made on shoestring budget with non-actors) like The Man From Earth (2007), Upstream Color (2013), Coherence (2013), etc. On the other hand, there were twisted sci-fi's like Moon (2009), Ex Machina (2013) which had minimal budget and some professional actors. In the same vein, Keir Burrows’ Anti Matter (2016) creates an intimate and intriguing sci-fi drama without succumbing to the constraints of low budget.

Ana (Yaiza Figueroa), a Hispanic-American Oxford University PhD student, stumbles onto a path-breaking discovery. The film opens with Ana crying while listening to an old tape in which she and her mother play together the piano. The tenderness we witness in the phone exchanges between Ana and her mother indicates that her emotional connection plays a vital role in Ana’s science experiments. During an extended experiment in the lab, Ana generates a wormhole which transports matter (a simple molecule at first). Seeking help from friends and fellow researchers Nate (Tom Barber-Duffy) and Liv (Philippa Carson), she pushes the boundaries in generating and stabilizing the worm-hole so as to transport objects. After successfully testing with marbles and boxes, they send through caterpillar and cat without little bit of failure. Rendering and sustaining a worm-hole naturally needs a lot of computing power. So their systems expert Liv illegally sets off a worm to steal power which later brings government authorities to the campus doors to investigate possible case of cyber-terrorism. 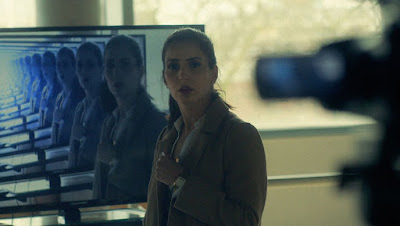 In order to seek large-scale funding, the trio plans to access the discovery’s full potentialities, including the act of sending a human through the worm-hole. After drawing the short straw, Ana gets ready for the human test. As expected something goes wrong. The Ana who re-emerged through the worm-hole fails to keep track of time, doesn’t make any new memories and keeps on dreaming about a locked door in the basement lab. Nate and Liv behave in suspicious manner, shooting up Ana’s paranoia. The atmosphere around Ana slowly becomes chaotic as animal lovers outside the campus ramp up their protests (against experiments on animals inside the university) and the cyber authorities goes around the campus questioning students and faculties. It all leads to a more philosophical ending which puts out some interesting questions about memory, self-identification and existential pain.

The first twenty minutes where the three PhD students casually talk with scientific jargon creates a very believable sci-fi premise. Keir Burrows weaves a tense atmosphere and keeps intact the structural ambiguity till the end. From performance and script-wise, not everything flows smoothly. Burrows do struggle towards the end to neatly connect the emotional and intellectual quotient. The supporting performances are also underwhelming to instill complete emotional engagement. The whole episode involving government agent looks too contrived to create any palpable sense of dread. But Yaiza Figueroa’s central performance holds things together. Even when the narrative becomes unnecessarily goofy, our sympathies lies with Ana. Figueroa’s performance adds much-needed poignancy to the climactic queries. Despite certain missteps, sub-standard effects, and writing flaws, Anti Matter (106 minutes) proves to be a sophisticated sci-fi story that comprises of reasonable emotional and intellectual pull. Viewers who hate hard sci-fi may of course find the film to be too dry or less accessible.

Nice movie i love it, very good review
like also reviews from https://moviefunspace.blogspot.com