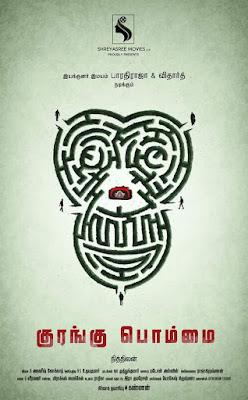 Nithilan Swaminathan’s interesting hyperlink thriller Kurangu Bommai (2017, Monkey Doll) contains one of the spectacular MacGuffins in the recent history of Tamil cinema. MacGuffin, as popularized by suspense master Alfred Hitchcock, is sort of the engine that sets the narrative in motion. It could be anything: an object or person or it could be one’s pursuit for abstract things like love, power, etc. A MacGuffin works better when the nature of it as important to the characters on-screen as it is to the audience. As viewers and characters are drawn into the myth of MacGuffin, a fine film-maker employs this element to bring more depth and complexity to the proceedings. In Kurangu Bommai, the MacGuffin is a travel bag with a printed monkey face. Our understanding of what’s inside the bag varies at different points of the narrative, deepening the viewers' emotional investment. The object is shown as the ultimate temptation, although it only induces unpleasant consequences.

Kurangu Bommai is the debut feature of Nithilan Swaminathan and a second well-received hyper-link Tamil cinema of the year (previous one was Maanagaram aka Metropolis). The film isn’t tonally perfect, the writing is flawed at times, and also gives into some pitfalls of commercial film-making. Yet the most fascinating aspects of the movie is Mr. Nithilan’s eye for details, cinematographer NS Udhayakumar’s vigorous shots of urban scape, and pitch-perfect performances from the ensemble cast. Writer/director Nithilan shows a penchant for placing the scenarios between dark humor and utter bleakness. In the opening scene, we see a middle-aged man talking on phone, singing a song, and chewing tobacco as well as spitting to one side. As the camera gradually zooms out, we perceive the distressing nature of the setting. The man named Ekambaram (PL Thennapan) is a timber mill owner (from Tanjore) who is also engaged in the illegal business of smuggling precious Hindu god statues. His spit actually lands on a bounded police officer who seems to have stumbled upon Ekambaram’s contraband dealings. The fate of the guy in uniform is easily guessable. However, the sensibilities that went into staging this simple ‘villain or MacGuffin’ introduction scene are intriguing. Furthermore, this confrontation leads to the introduction of a character, so contrary to Ekambaram: Sundaram (Bharathiraja), a naïve family man and a friend/trusted worker (in the timber mill) of Ekambaram.

The plot kicks-in when the 5 crore rupee worth statue needs to be delivered to Chennai (from Tanjore). In a parallel narrative, we have Kathir (Vitharth), Sundaram’s son who works as a call-taxi driver in Chennai. He randomly encounters a middle-aged man in the bus stop, carrying the aforementioned locked travel bag. The middle-aged guy is talking to his wife in mobile about arranging money for his daughter’s marriage. A pickpocket (Sekar) who wants to score big overhears the conversation and snatches the bag. Kathir runs after him and eventually nabs the guy. He brings back the bag, but to his dismay, he couldn’t find the stranger in bus-stop. Then the narrative cuts to recent past (2 days before) when Sundaram hops aboard a bus to Chennai with the same travel bag, as per Ekambaram’s instructions. Sundaram has now gone missing. The narrative moves between the recent past and the present where group of characters search for this coveted monkey-face bag. As the sketchy past adds to our perception of the present, we become uncertain about what’s actually inside the locked bag.

What’s interesting about Nithilan’s direction is his brief visual detours, stuffed with spectacular details. Take for example, the staging of the conversation between police inspector and disquieted gypsy couple, Nithilan plays with our judgment of the scenario. Then there’s a shot of cat with newborn kittens, confined to police station’s dirty storeroom, the shot of a goon’s kid imitating her father’s action, the capturing of familiar domestic squabbles, the shot of a broken ceiling fan at the police station, the details that goes to describe the pickpocket’s angst. A lot of these visuals don’t have any direct impact over the story. But these barrages of tiny, bewitching details ably study the oppressive, societal space, which really has a hold over the characters’ erratic decisions. I hope Mr. Nithilan retains this extraordinary gift of gazing at societal atmosphere in his future projects too.

Similar to Maanagaram, Kurangu Bommai too demands us to accept certain level of implausibility (suspension of disbelief) to fully engage with the narrative. The inexplicable number of coincidences mostly works in favor of propelling the plot. However, the one sub-plot that could have been easily substituted or done away with is cutesy romance between Kathir and Viji (Delna Davis). The out-of-place romance and the ensuing song wreak havoc to the film’s otherwise serious race against time and emotions. The commercial value of this cute sub-plot is understandable but it slackens the tension of tightrope situation, failing to prepare us for the ultimately grave ending. Maanagaram also had to succumb to similar commercial values, but that generally had a hopeful tone and happily rounded off the culmination of hyperlinks. Considering the memorably distressing final twist in this film, Kathir and Viji’s exchanges seem very meek. The other problem is Kathir’s characterization. It’s a bit dry and doesn’t have the overreaching arc unlike the other characters. Bharathiraja’s Sundaram and the other two villain characters are well-rounded or complex compared to do-gooder Kathir. Moreover, Kathir’s final act although has the perfect shocking factor, on hindsight appears highly farfetched. 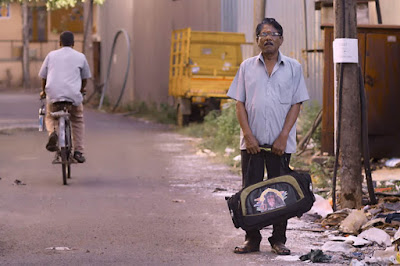 Despite playing an under-written character, Vitharth does a reasonably good job in playing Kathir (it is also commendable how the actor is associating himself with sensible projects – previously played lead roles in critically acclaimed Kuttrame Thandanai & Oru Kidayin Karunai Manu). Nevertheless, Veteran director Bharathiraja, Thenappan, and Elango Kumaravel somehow manages to steal the show from Vitharth’s protagonist. Kumaravel, who often plays good guy roles in Prakash Raj-Radha Mohan productions, astoundingly plays the humanized yet casually brutal villain Sekar, who is lot obsessed with Cricket. A lot of incredible thought has gone into the realization of this diabolical character (the only thing that felt unnecessary about the character is the brief break into out-of-tune satirical song towards the end).

Kurangu Bommai (105 minutes) is a compelling, hard-hitting thriller that overcomes its flaws and implausibility factor with directorial finesse and quality performances.