Apostle [2018] – An Ambitious yet Unremarkable Horror/Mystery 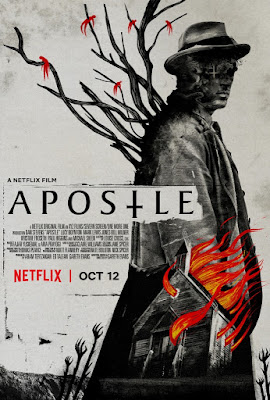 Welsh film-maker Gareth Huw Evans’ Indonesian action flicks The Raid: Redemption (2011) and The Raid 2: Berandal (2014) I reckon were the perfect guilty pleasure movies, bedecked with intensely violent action sequences and uncomplicated plot-line. Martial artist and actor Iko Uwais pitted against machete-twirling, baseball bat-swinging psychopaths has offered grimly fascinating action extravaganza. Now the Welshman with his latest film Apostle (2018) has turned to folk horror, taking cues from British cult horrors of 70s (especially The Wicker Man). Evans has written Apostle, long before he went to Indonesia with his wife and stumbled upon the job to direct a documentary on silat martial art, where he met Iko Uwais (and later collaborated with him in three martial arts action films). Evans does establish himself as a good storyteller in Apostle as much as precisely staging those kinetic martial arts sequences. But unfortunately, the plot suffers from too much of clumsy turns and contrivances to provide an emotionally affecting experience.

Set in the year 1905, Thomas Richardson (Legion fame Dan Stevens), an ex-missionary and son of a wealthy Englishman, is charged with rescuing his sister (Elen Rhys), who is held for ransom by a pagan cult holing-up in the remote island of Erisden. Thomas arrives at the island after carefully switching his boarding documents with those of another passenger so as to evade his sister’s kidnappers. The island and its inhabitants seem to hail straightly from medieval Europe as they worship a real blood-seeking earth goddess. The groups of settlers are led by the self-styled prophet and egalitarian Malcom (Michael Sheen). He promises a life with moral decency and good work, and freedom from onerous taxations. 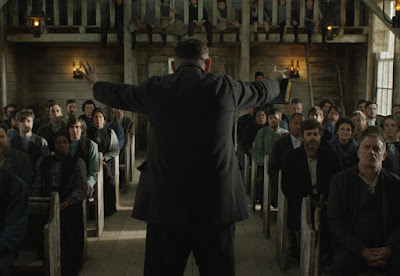 The dark underpinnings behind Malcolm’s vision of peace and social harmony are ascertained from his gang of raging enforcers. Within few nights in the island, Thomas discovers odd rituals in the village, for example the jars of blood the residents leave outside their bedroom doors every night. Thomas wanders the night with torchlight to try and understand what’s really going on and find out where his sister is kept. Meanwhile, two young lovers keep their night-time encounters secret, which later brings devastating consequences. Moreover, Thomas acquaints himself with Malcolm’s unsuspecting, good-hearted daughter Andrea (Lucy Boynton). In the subsequent quest to save his sister, Thomas has to endure supernatural forces and outwit the savagery of religious nuts.

If Apostle works to an extent, it’s because of the right actors (particularly Michael Sheen was a good choice) and Evans’ ability to conjure atmospheric, isolationist terror out of the medieval setting. The claustrophobia eked out from the unforgiving island adds a disturbing immediacy to the narrative (captured with muted, period-era color palette). Evans’ script is heavy on atmospheric details but fumbles with character sketches. The characters remain true to their types (savior protagonist, demented despot, naive teenagers, empathetic girl, and so on), and their actions become increasingly cliche as the plot moves forward. What made Wicker Man such a wonderful horror classic is not just the eerie atmosphere, but also the zealotry expressed by the whole community who initially, on the surface, appear to be very friendly and civil. In Apostle, apart from Malcolm and his disgruntled friends, Quinn (Mark Lewis Jones) and Frank (Paul Higgins), we don’t sense the cultural-social paranoia affecting the community.  Malcolm’s flock doesn’t even seem much devoted to the cause. 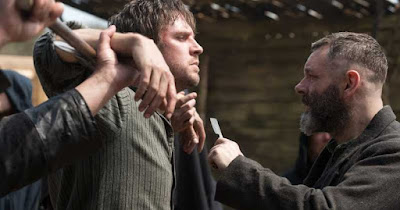 Although Evans has moved from kinetic action to supernatural horror, his signature intensity glows when he ratchets up the brutality by dropping slow-burn tension for extreme gore. Two scenes involving medieval torture devices are effectively choreographed in order to elevate the genre pleasures. In fact, the expansive macabre elements partly make up for the flawed writing. Apostle does offer a timeless as well as timely commentary on the madness of religious fervor and savagery of power-hungry men. The image of a god literally kept in captive and perpetually gifted with the blood of innocents serves as a invective commentary on human’s exploitation of religious faith. But such themes are only presented in a muddled manner and gets lost in a forgettable narrative. Altogether, Apostle (129 minutes) is visually striking, super-gory, cult-society horror that lacks great deal of emotional weight.