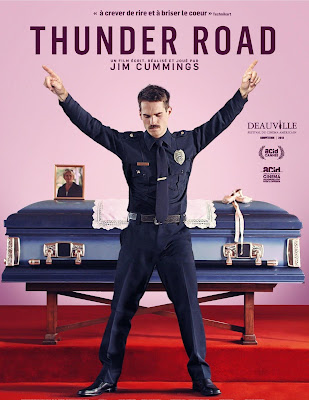 Jim Cummings’ tragicomic indie Thunder Road (2018) opens in a spectacular fashion: an unbroken, hilariously awkward as well as grief-stricken 10-minute take set inside a church as the lean, mustachioed patrolman Jimmy Arnaud delivers a rambling eulogy for his beloved mother. Jim says he is the only one of his mother’s three children to have made it out to the funeral. But looking from the devastatingly raw manner he processes his grief, Jim would have also liked to isolate himself from the outwardly sad yet fiercely judgmental crowd gathered before the altar. Jim starts his speech with simple thank-yous, then begins to clumsily reminisce about his mother’s talents (she ran a dance school), his bumpy relationship with her, his problems with dyslexia, and eventually the mother’s love for Bruce Springsteen (particularly ‘Thunder Road’ track), which he tries to play in a tape recorder that's busted. But without backing down from the attempt to perform good-bye dance, Jim begins to ungainly dance in front his mother’s casket, while the small crowd watch this meltdown with bafflement. Once Jim is done, his 10-year-old daughter clings to him, out of concern and shame, and he retires to back most pew of the church. What follows for the equally fascinating 80-odd minutes is the character study of this edgy cop, whose life seems to be unraveling day-by-day, vignette-by-vignette.

Based on 2016 Sundance-award winning short film of the same name, Thunder Road was written, directed and boldly performed by Jim Cummings. Much of the movie’s strength is derived from Cummings’ nuanced film-making style and serio-comic acting manners. Like Columbus (2017) or Krisha (2016), this is one deeply emotional American independent feature that has arrived out of nowhere. Thunder Road has some good supporting performances, but it’s largely a one-man show. Nevertheless, unlike many aspiring directors purporting themselves to be versatile craftsman, Jim Cummings has a very tight grasp on aesthetics and emotions (his beneficial long-takes – that gives less to edit – are staged in a pragmatic manner and works well with the story structure). Before picking up SXSW Festival’s Award for Best Narrative Feature, Cummings’ CV didn’t have notable credits, except for playing a small role in TV series The Handmaid’s Tale and serving as associate producer in Trey Edward Shults’ intense family-drama Krisha. But the positive momentum generated by the debut feature’s success, might push Mr. Cummings to make more galvanizing works that gleams with profound humanism. 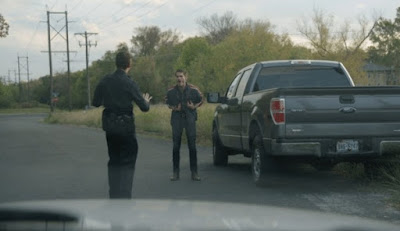 Raised by a single mom in a sleepy small-town Texas, Jim Arnaud is an incorruptible police officer who wears his emotions on sleeves. However noble his intentions are, Jim’s life for the past year has gone to hell. His uncaring wife Roz (Jocelyn DeBoer) has left him, taking their 10-year-old daughter Crystal (Kendal Farr) to her venomous boyfriend’s place. Not long after the bizarre funeral dance, Jim badly handles a drunk-and-disorderly call that gets him at trouble with his superior officer. Adding to the grief of losing the only care-taker in his life, Jim’s wife now proceeds for divorce and seeks sole custody on their daughter. The alleged ‘emotional problems’ Jim showcased at the funeral also comes back to haunt him during the family court case. The broken-hearted guy takes other missteps too, outcomes of Jim’s ill-equipped nature to process emotions of grief. A complete meltdown seems inescapable with only the warmth of friendship with fellow officer Nate (Nican Robinson) and love for daughter Crystal delicately keeps him at a balance.

Jim Cummings’ direction and script walks a tightrope between tangible emotional pain and cringe comedy. The most enticing aspect of the narrative is of course the characterization of man-child protagonist. Arnaud’s boorish exterior features serve as perfect antithesis to his naked emotionalities. Furthermore, Cummings marvelously pulls off the anguish and goofiness of Jim Arnaud, while splendidly executing plethora of details behind the camera too. It isn’t exactly a low-key performance like Casey Affleck’s showcase of frozen grief in Kenneth Lonnergan’s Manchester by the Sea (2016). Cummings often swings for theatricality -- for example, he delivers a shirtless rant to channel his character’s simmering frustrations with the world -- and absolutely aces it without overstepping a bit. The ensemble cast was charming enough, especially Kendal Farr as the reticent 10-year-old daughter and Robinson as the supportive pal. ‘Blue Ruin’ fame Macon Blair as the school teacher has one wonderful comedic confrontational scene with Cummings. 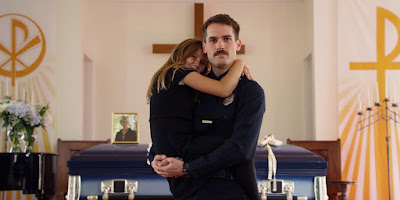 The protagonist’s wild mood swings and certain vocal inflections certainly adds funny quotient to the proceedings, although the messy, heart-wrenching process of grief is never downplayed for laughs. The chuckles come from us relating to the whole spectrum of feeling sad and being absurd at the same time. I particularly liked the seamless way Cummings captures the disorderliness of bereavement. In the opening scene, after finishing his dance and carrying his daughter back to the pew, Jim consoles the girl ‘It’s ok honey’, and adds in the same sentence, ‘Oh, Jesus fucking Christ you’re heavy’. This nature of brushing up with on-the-moment emotions and at the same time getting pricked by one’s immediate reality is well-etched throughout such small moments. It persists in the scene Jim howls at his police buddies or when he comforts his daughter in the back of an ambulance; built-in awkwardness & anxiety wrestling with the cruelty of circumstances. Jim’s writing and his camera mesmerizingly attunes to such turbulent emotional grounds, making us to wonder about our own often unfathomable grieving pattern. Eventually, Thunder Road (92 minutes) comes across as a subtle psychological portrait of a broken man which doesn’t dispel inky-black void of sadness through illusory and instantaneous healing process. Altogether, it's a purely spellbinding stuff!