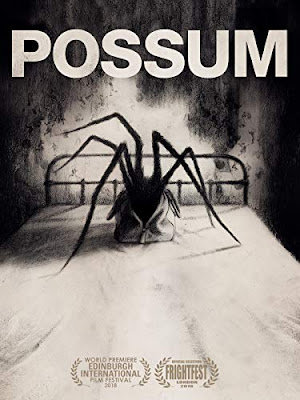 Matthew Holness’ chillingly atmospheric directorial debut Possum (2018) tells the tale of a strange loner named Philip (an impressively unnerving Sean Harris), who carries an arachnid puppet with a human head, bundled inside a leather holdall. Through the voice-over recitations of a children’s poem, we comprehend that the puppet is called ‘Possum’ and it pretty much represents Philip’s distressing personal trauma. The polemical nature of his puppetry has driven Philip to retreat to his moribund hometown and dilapidated childhood home, still occupied by the repellent Uncle and puppeteer Maurice (Alum Armstrong). Earlier on a public train, Philip encounters an innocuous teenager who is soon pronounced ‘missing’. Gravelly voice, scouting tour of the town's squalid quarters plus the concoction of weird mannerisms naturally brings suspicion upon Philip. He seems to fulfill both the role of victim and perpetrator as the damaged childhood threatens to wholly poison his adulthood experience.

Comedian-turned-film-maker Matthew Holness joins the ranks of fellow Brits Peter Strickland and Ben Wheatley in demonstrating his unique skill to capitalize on an unwholesome atmosphere that's simmering with ambiguous terror. Blending the gothic scares of Hammer horror, these contemporary British horrors also fix their focus on social realism, bringing into view the derelict wastelands and stagnant lives (shot in bleak Norfolk locations). It is particularly interesting to see Holness debuting with a horror feature since his previous work include marvelous TV sitcom, “Garth Marenghi's Darkplace”, a horror spoof series. Holness’ deranged vision in Possum, however, is anything but comic. Furthermore, he tries to emulate the post-apocalyptic feel of David Lynch’s Eraserhead (1977) and psychological horror of David Cronenberg’s Spider (2002). 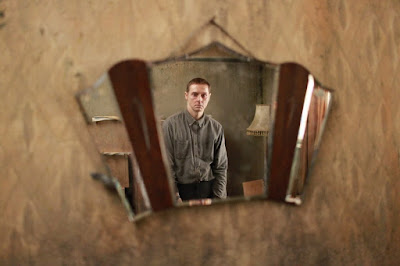 Heavy on macabre atmosphere and thin on plot development, Possum opens with silent-horror aesthetics, the opening credits unfurling against grainy images from the film. Much of the film’s narrative accounts Philip wandering around the empty, decaying fields of the town, which once harbored military barracks. He tries to find a place to dispose the leather bag and enough tension is generated from the question of what’s inside the bag: could it be the severed head or body parts of the teenager Philip gazes with his beady eyes? Nevertheless, the thing inside the bag comes across as reflection of Philip’s traumatic memories. The grotesque-looking puppet is made with realistically shaped spider legs and at its center is the pale, lifelike mask of a man’s face. Philip hides the bag amidst tangled, spidery branches of a tree, throws it into stagnant waterways. Despite the puppeteer’s fixation, the puppet returns back to his room or hangs on the wall. Gradually, as Philip finds it hard to relieve the trauma of the past, the arachnid puppet even appears to come to life. Such Jungian representations of the tortured protagonist are less ominous compared to true monstrosity lurking inside Maurice. He is bully as well as a comforting figure in Philip’s life and the murky nature of his relationship with Philip is eventually revealed through a schematic climax.

Possum is largely watchable for its perpetually unsettling surroundings that repeatedly showcase montage of neglected buildings, weedy gardens, and muddy landscapes. The creepy strangeness evoked by the amalgamation of stark imagery and dizzying sound design subliminally projects a language of unrest and mayhem. Unfortunately, the very thin plotting and unambiguous ending dilutes the overall effect of the movie. Rather than confronting Philip’s horrendous memories, Holness opts for unnecessary expository visuals in the final stretch to push it towards a smooth resolution. And for all its magnificent series of evocative visuals, the narrative’s emotional space seems to be as trapped as the puppet confined to the bag. Overall, Possum (85 minutes) is watchable for its sensorial intensity and knock-out performance from Sean Harris.