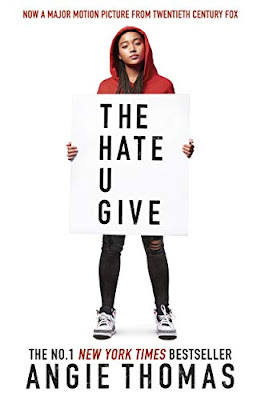 Angie Thomas’ 2017 young adult novel The Hate U Give offered a complex portrait of race and class issues troubling contemporary America through a poignant coming-of-age narrative. While YA novels like The Hunger Games trilogy (by Susanne Collins) reflected on oppressive political power through the dystopian near-future setting, Angie Thomas eschewed allegorical notes to directly tackle the violent, abusive reality of racial hatred. The book was a huge mainstream success (occupied 50 weeks in the New York Times bestseller list), and it’s fascinating to see a quicker movie adaption and that too by a major Hollywood studio (Love, Simon was another recent and first of its kind big-studio narrative to feature a gay lead character). Moreover, George Tillman Jr.’s smooth adaptation of The Hate U Give highly succeeds because of the lead actress at its center: Amandla Stenberg (Rue in ‘The Hunger Games’) in a mesmerizing star-making performance.

Angie Thomas was driven by the gruesome death of 22 year-old African-American Oscar Grant (subject of heart-wrenching biopic ‘Fruitvale Station’), shot by Oakland police officer Johannes Mehserle, in order to start writing her novel. In the next few years, police killings of unarmed black people only increased in numbers, whereas the trials and conviction of police officers are considerably rare. The Hate U Give smartly presents that righteous fury over other plethora of injustices inflicted on African-American community which remains frequently heartfelt and occasionally didactic. The tale also reflects on the fractured nature of black communities, endlessly mired in drugs and gang violence. 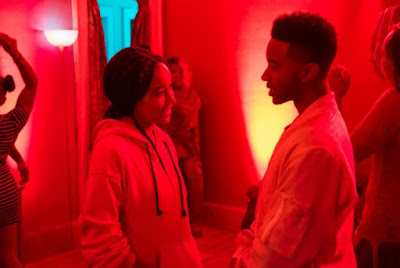 The film opens with 16-year-old Starr Carter’s (Amandla Stenberg) inner monologue, who chronicles her life as a young black girl from a working-class, high-crime neighborhood (‘Garden Heights’) and travels across the city to attend Williamson, a affluent and predominantly white prep school. Starr talks of her two different identities: the Version 1 means confirming to her neighborhood’s vernacular and other standards, whereas the Version 2 is all about acting refined and serious and not ‘intimidating’ white friends with her blackness. Starr version 2 also has to put up with her white friends’ appropriation of black culture. Once Starr’s conflicting identities and tentative relationship with white boyfriend Chris (K.J. Apa) are established, the narrative jumps to a neighborhood party which sets off chain of devastating events. In the party, Starr meets Khalil (Algee Smith), a childhood friend and her first crush, who has made some poor decisions in life due to family pressures. 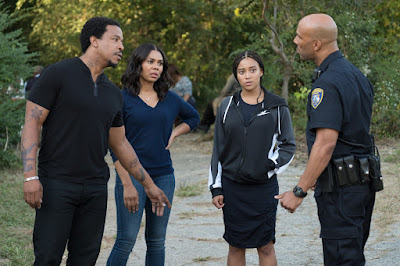 When a confrontation breaks out at the party, Khalil decides to drive Starr home and even steals a kiss from her. But once the police-car lights come on, we anticipate the worst. The young, nervous white police officer mistakes hairbrush for a handgun and shoots down Khalil. After the senseless murder, Starr begins sees the world for what it is and her smooth to and fro transition between two identities becomes harder. Much like the 2014 Ferguson shooting, Khalil’s murder sparks outrage and protests in the local community. Despite a witness, the killer police man could possibly go scot-free. And as usual, police and media strive to reduce Khalil into a uni-dimensional criminal.  Starr’s identity as being the sole witness to the crime isn’t yet revealed to the larger world. The rest of the narrative is all about Starr agonizing over whether to take a stand against the despicable crime and judicial cover-up or keep her head down as always. In due time, Starr’s camaraderie with her school friends is tested as they are either ignorantly racist or irritatingly callow. At home, Starr’s father Maverick (Russell Hornby), staying true to his name, encourages his daughter to be brave. However, mother Lisa (Regina Hall) fears for Starr’s safety. One visible threat for Starr’s family comes from drug dealing gangster King (Anthony Mackie), who has got lot to lose if the girl provides the testimony (in front of grand jury) implicating him.

Similar to this year’s independent features BlacKkKlansman and Blindspotting, The Hate U Give blisteringly rallies against the institutional racism. And this being a teen drama with old-school sentimentality might help the polemical subject matter to reach wider audience. George Tillman Jr.’s fairly skillful and candid direction (he uses a warmer color palette for Garden Heights and frigid blue palette for Williamson) stages each learning moment of Starr Carter with maximum impact. Audrey Wells’ adapted script contains all the cliched, contrived elements present in the novel. But for the most part, it keeps alive the simmering tension and breathes in sense of urgency. The family exchanges are effectively dramatized, observing their perseverance, anger, and frustration with utmost care. Most importantly, both the film and novel acknowledges the grey areas (the rampant criminal behavior in black neighborhood) and deep-seated social ills (poverty, housing, unemployment) rather than being a simple political slogan. Much of the stirring visuals and scenario are borrowed from real-life events (for example, Starr throwing a tear gas canister) which makes trials and tribulations of Starr Carter unmistakably relevant. 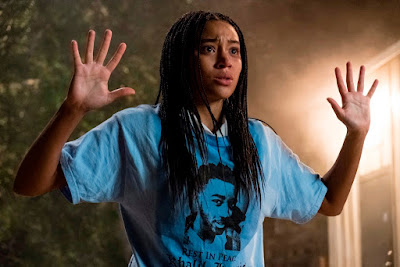 The movie suffers a bit whenever its dramatic stakes are overly elevated. This could be felt with the whole sub-plot involving Mackie’s drug lord character. The confrontation between him and Starr’s family infuses artificiality to the proceedings that contrasts the general tone of lived-in realism. At times, extra effort is taken to reiterate the messages: for example, after Starr’s powerful speech over a megaphone in the angry protests, a mawkish scenario follows in order to once again remind us of Tupac Shakur’s acronym THUG LIFE (The Hate U Give Little Infants F**ks Everybody). Nevertheless, the narrative shines while accounting how Starr’s double life reality collides with one another. There’s a brilliant reactionary scene whens she harshly reprimands (with a hairbrush) her so-called progressive white friend, who can’t perceive an issue past her own racial, class blind spots. Chris, Starr’s boyfriend, although starts off as a caricature of clumsy white teenager, is given some space to develop into a real character. Of course, the emboldening aspect of the film is clearly Amandla Stenberg’s illuminating presence. She splendidly charts Starr’s transformation into a self-possessed girl while gracefully tackling wide range of emotions: love, shock, grief, fear, anger, and tenacity. Altogether, The Hate U Give (128 minutes) is a melodramatic yet an intricate YA narrative about America’s incessant racial strife.