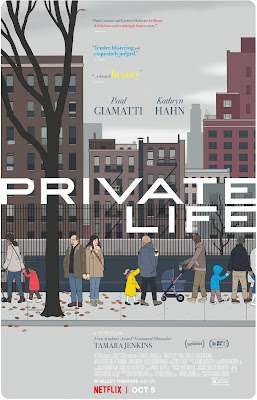 American indie film-maker Tamara Jenkins’ debut feature The Slums of Beverly Hills (1998) opens with the scene of an adolescent girl being fitted for a bra. Now two decades later, Jenkins in her third feature-film Private Life (2018) opens with the shot of a woman in her knickers waiting for her husband to inject hormones. These might sound like normal yet extremely private occasions. But more than the sense of having intruded into someone’s private space, there’s a feeling that we are looking at some secret, embarrassing thing which our societal norms, for some dubious reasons, considers it a taboo subject. And through this jolt of ‘secret’ normalcy, Jenkins not only establishes the unseen female perspective, but also sets up the narrative course. If Slums of Beverly Hills’ ‘bra-fitting’ establishes the character of a poor girl tentatively coming to terms with her adolescent body, Private Life’s ‘hormone injection’ unveils a middle-aged couple’s burning desire for having a child which makes them painfully navigate the infertility industry. Moreover, both these features are loosely based on episodes or experiences from Jenkins’ own life.

The director’s second film The Savages (2007) revolves around two siblings caring for their dementia-afflicted father. Like Savages, Private Life also looks at the ignored dimensions of family dynamics without wrapping it under the comforting layers of sentimentality. Furthermore, both these films share the humiliations and absurdities of modern medical procedures. In Private Life’s case, it’s the complex world of assisted reproduction. Rachel (Kathryn Hahn) and Richard (Paul Giamatti) are middle-aged Manhattan couple trying to have child for a long time. The painful nightly shots Rachel receives, the hospital room full of sad-faced waiting couples, Rachel wandering the cold clinic halls in thin gowns and small shower caps, the awkwardly jovial doctor (Dennis O’Hare) carrying out the procedure, the porn video intended to enable Richard’s sperm delivery, the plaintive feeling as all of these fail, and finally clinging to hope offered by an entirely different, exhausting as well as more expensive medical procedure. Richard and Rachel have been going through this cycle for years, the costs claiming almost all of their nest eggs. 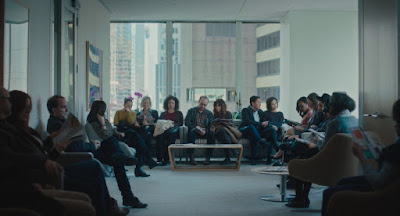 Richard even borrows from his brother Charlie (John Caroll Lynch) for an emergency procedure, which makes Charlie’s second wife Cynthia (Molly Shannon) rant, “They’re like fertility junkies! … They’ve been doing this for years! They need to stop.” Richard and Rachel are also open to adoption, but those attempts have taken them nowhere. The failures and disappointments do indeed take a psychological toll and makes it difficult to deal with other people. At one occasion, they hide in their apartment from responding to ‘trick-or-treaters’ knocking at the door. The feelings of being left out while gazing at other normal family unit  haunts them. The 'fist-bumping' doctor, however, suggests the couple to consider using an egg donor. Rachel is appalled by this, but she slowly comes around, browsing through the websites and looking at thumbnail pics of possible egg donors. 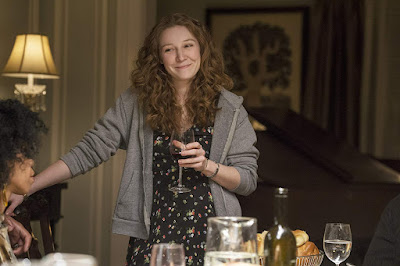 When Richard’s step-niece Sadie (Kayli Carter) – Cynthia’s first daughter by another marriage – lands on his couch for a brief stay, the couple decides to ask Sadie to donate her eggs. A medical counselor unflinchingly reminds Richard and Rachel that ‘it wouldn’t be incest’ since the 25-year-old Sadie isn’t a blood relative. Sadie is a flighty, impulsive girl aspiring to be a professional writer. She looks up to Richard for his avant-garde theater works and Rachel for being an acclaimed short-fiction writer. She calls them her ‘artistic parents’ and loves them for not being judgmental, unlike Cynthia who abhors Sadie’s decision to dropout and complete college in ‘absentia’. Always eager to please Richard and Rachel, Sadie immediately warms up to the idea of donating eggs and even finds a new sense of purpose in being an egg donor. But of course more obstacles and complications arise, making the fatigued couple to ask some toughest questions about their married life. 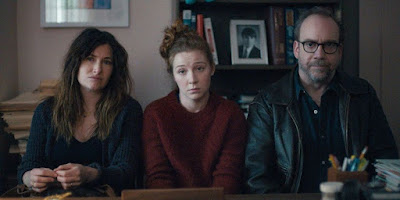 If there’s one thread that unites Tamara Jenkins’ three features, it is her examination of (naturally) changing bodies and the constant insecurities arising from it. A teenager growing breasts, an old man dying of dementia, and the issue of fertility plaguing a couple are all precisely and introspectively detailed by observing the characters’ cultural, social milieu which paves way to certain hidden anxieties. Interestingly, the weightiness of such themes is cleverly dispersed through Jenkins’ well-staged and written seriocomic episodes that make us laugh while also subtly conveying the underlying sadness of the situation. Much of Private Life’s humor comes from bitter emotions and the awkwardness with which the couples circumvent the alleged taboo subjects. When Richard requests Rachel to consider a egg donor, saying, ‘they do it with farm animals all the time’, Rachel explodes, “Well, I'm not a goat!”. Rachel’s fury over Richard’s suggestion to take a painting from their apartment leads to another hilariously embarrassing episode. Nevertheless, the comedic moments never sounds sitcom-like, partly because Jenkins’ writing brings forth an authentic, lived-in feel. She walks a fraught emotional tightrope, never overplaying the character quirks for unintended laughs.

The other half of the credit goes to the lively dynamics between Hahn and Giamatti, both of them laying out Richard and Rachel’s private joys and pains with such profundity. They are so good at playing this normal, flawed couple that we rarely catch them ‘acting’. Newcomer Kayli Carter as Sadie is a spectacular addition to the cast. She authentically captures the sense of bafflement accompanying the much energetic yet anxious modern youths. There’s nothing much to nitpick in Jenkins’ storytelling. Her unsettling glimpse into the messiest parts of modern life and refusal to yield to the conventional cinematic notions of closure often cuts too close to home. Eventually, Private Life (123 minutes) isn’t just about the excruciating experiences of a couple fighting infertility, but also opens conflicted feelings about a society or culture that obsesses over parenthood (especially motherhood), making it the ultimate goal of (women’s) life. Tamara Jenkins showcases one couple stuck on this cycle of longing, heartbreak, and hope as if they are persistently moving through a revolving door while the destination of parenthood on the other side remains ever-elusive.