Garage [2007] – An Emotionally Devastating Drama about a Simple Soul

Sometimes the simple, quieter and thinner films would set out to touch a deep chord within us. Lenny Abrahamson’s soul-crushing Irish film Garage (2007) is one such movie. On the surface, its minimalist narrative deals with the mundane life of a lonely innocuous misfit Josie, a garage attendant in rural Ireland. But through Josie’s solitude, inarticulability, and awkwardness the film offers a piercing portrayal of a mentally challenged individual and how the apathetic rural society, which was itself marginalized or rendered passive by economic depression, tags him with a pariah label.

Written by Mark O’Halloran, Garage offers a very distressing and contrary view of modern rural life, unlike the old Ealing studio comedies where small-towners band together to win over the hopeless stagnation. The crumbling, shabby man-made structures and the bored, passive inhabitants remain as an unerasable splotch amidst the vast, breathtaking landscape. The narrative may not provide a profound commentary on the poverty and class in rural Ireland, but it perfectly works as a subtle character study, thoroughly invested in taking us through aspects of human experience we may not have given much thought or simply ignored. 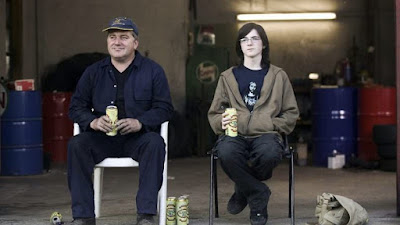 Josie’s plight deeply resonates with us because we may have come across a Josie in our life or we may share some of his traits to fully understand what it means to be treated as an outcast. And, popular Irish comedian Pat Shortt’s performance in the lead role is pitch-perfect. Josie’s life is defined by uncomplicated series of chores. He works at a rundown filing station near a village whose customers are mostly the local ones who either laughs with him or laughs at him. In the initial scenes, Josie’s unremarkable life is showcased with tinge of absurd humor.

It may give off feeling that it’s a one-note joke about a mentally challenged guy. But the great synergy between writer Halloran and director Abrahamson provides a much deeply textured character that we aren’t able to categorize with mere societal labels. Josie lives in a dingy room behind the station and his daily wages pays for the food and few quids to have cans of beer at the pub. Men in the pub bully him or snigger behind his back, but Josie brushes it off with an awkward laugh. Afflicted by pains in the hip, Josie walks in a distinct manner and he often goes for a walk around the beautiful countryside in the morning. He befriends a horse by giving it few apples. He fancies a woman at local grocery store, Carmel (Anne-Marie Duff) who rebuffs him with ferocity. 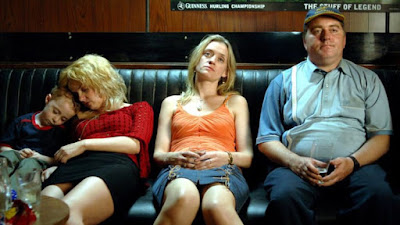 Things change when Josie’s boss (John Keogh) employs a 15 year old teenager David (Conor Ryan). Josie is visibly happy to train David to cover the menial tasks of car valet business. David is a quiet, bored guy who has very low expectations about his job and life in the town. His only best friend now seems to focus his attention on his new girlfriend. But David soon warms up to Josie’s genuine and friendly nature. They share a beer after a day of work and for the first time in his life, Josie feels he’s got some real companionship. Despite having the will, innocence and hope the trouble is that life doesn’t go our own way. Ironically, the character’s social isolation and intelligence (or lack thereof) which projected him as harmless endangers or threatens to further degrade his societal position after an 'incident' [‘The town looks after its own’, a truly ironic proclamation]. It all leads to a minimalist, wordless yet a subtly heart-breaking ending.

Garage might be chronicling the emptiness of life in a marginalized society, but Abrahamson’s visuals are rich in detail and loaded with meaning. He observes the prosaic life with an authenticity and expressiveness that it gradually immerses us in the squalid atmosphere. The other interesting element of Abrahamson’s direction is conveying deep emotions through what’s left unsaid or not well-articulated. In fact, the dialogues in Garage aren’t loaded with what we’d like to call as ‘message’. The writer and director are much fascinated in zeroing-in on emotions that couldn’t be verbalized. This choice eschews any of the conventional dramatic elements in the narrative. 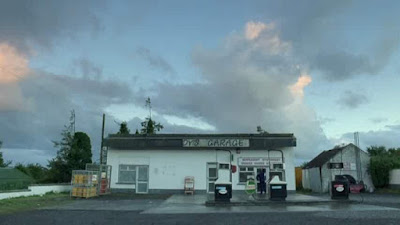 Although Josie’s growing camaraderie with David provides room to turn it into comedy of misfits, both Halloran and Abrahamson earnestly focus on the quietude between them (indeed, silence speaks volumes). One particularly devastating scene towards the end when Josie makes tea for his boss Mr. Gallagher impeccably conveys woeful emotions through things not articulated. We know why Gallagher is there and Josie knows too. But on-screen, we only see Josie fretting over a tea in order to mask the distress deep under the surface. The director also cuts at moments that are totally unanticipated. Rather than encountering significant moments in the film with explicit dialogue or openly emotive manner, the director discards the shot at quietly intense points which happens to linger long in our memory (even within dialogue and sentiment-heavy movies like Frank and Room, director Abrahamson maintains this tactic).

The good thing about Halloran’s writing is his balanced portrayal of small town life which isn’t just delineated by its casual cruelty. There’s a deep layer of sadness affixed to the town dwellers that we do feel for their predicament despite the harsh treatment of Josie. Moreover, since the film is really about humanistic observation of Josie’s unremarkable life, Halloran doesn’t burden the narrative to deal with cliched scenarios of the depressed town. Much crucial to the movie’s elegiac tone is the understated performances of a talented cast. Pat and Conor’s friendship very well developed with a dry sense of humor. Pat Shortt flawlessly builds up the character of Josie, right down to the little details of how he walks, speaks and bears himself around others (uttering ‘Now!’ with a clumsy smile). Both Conor and Pat provide glimpses of their characters’ inner life without doing any of the usual ‘acting’.

Garage (85 minutes) is a darker and realistic portrayal of life at the margins of contemporary rural society. It employs obscurity and silence in a finely-attuned, instinctual manner that it infuses much depth to a seemingly simple story.