City Zero [1988] – An Uncanny Absurdist Discourse on the Soviet Reality

Mikhail Gorbachev’s ascension to power in 1985 as the General Secretary of the Communist Party led to the policy of Perestroika, which was an attempt to revitalize Soviet Union economy. Another Gorbachev policy is that of Glasnost, which sought reforms like governmental transparency and freedom of speech. Nevertheless, the policies didn’t rectify the stagnation in economy or decentralize the power, leading to the unforeseen collapse of the Soviet Union in 1991. Now historians perceive the Brezhnev’s rule (1964-82) as the Era of Stagnation, while perestroika and glasnost period supposed to have seen through the lies and illusions of social stability and economic progress broadcasted by the Soviet high command. The social and political thought of those years (mid to late 1980s) is presented through a fantastical and comically absurd scenario in Karen Shakhnazarov’s City Zero (‘Gorod Zero aka ‘Zerograd’, 1988). 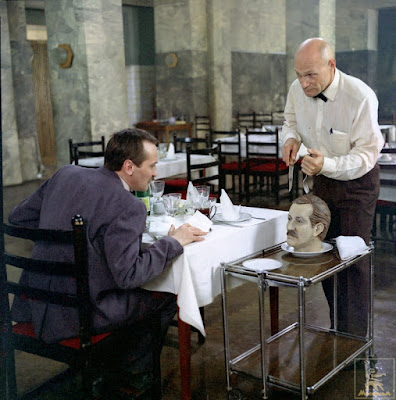 City Zero opens at one hazy, beautiful predawn morning in a deserted railway station with a lone man getting off the train. The man is an engineer from Moscow named Aleksei Varakin (Leonid Filatov). The provincial backwater town is unnamed and Varakin takes up a taxi to the hotel. The gloomy, empty spaces foreshadow the succession of unusual events and the subsequent entrapment of Varakin. As our middle-aged protagonist pays visit to the town’s air-conditioner manufacturing industry to negotiate regarding panel design with the factory director, he comes across a young secretary sitting naked before the typewriter. The woman’s nakedness isn’t noticed by anyone but Varakin. The factory director’s (Armen Dzhigarkhanyan) behavior is also strange as he calls for his chief engineer who has been dead for eight months. Moreover, the meeting ends on an unproductive note. Varakin decides to take the evening train back to Moscow, and visits a restaurant for lunch in which he is the lone diner.

Things get increasingly weird as the waiter brings a cake for dessert which Varakin didn’t order. The cake is the mirror image of Varakin’s head. Suddenly a musical troupe starts playing and the waiter slices up the cake to offer it to his only customer. Varakin refuses to eat and pays off the bill. The waiter warns if he doesn’t eat the cake, the chef might shoot himself. Varakin doesn’t pay attention to this bizarre warning and makes to the door when he hears a gunshot. The chef seems to have shot himself. Varakin is summoned by the police. From then on our hapless hero is caught under the illogical Kafkaesque social system of the place which demands Varakin to never leave the place. 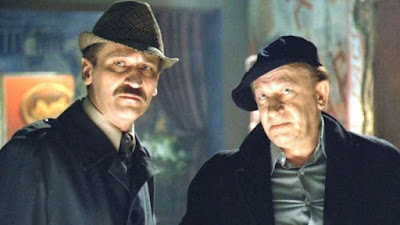 The narrative’s series of bewildering segments includes a jaunt through an underground makeshift museum (that was once a coal mine) of the town’s idealized past. From Troy, Attila the Hun to Gulag and young Stalin, the museum curator highlights (in a deadpan manner) the whole span of Soviet history that's somehow absurdly rewritten to strongly link it to the town. The museum also pays tribute to rock-and-roll, displaying the figures of the first couple in town, who were bold enough to dance to ‘Rock Around the Clock’ (the fates of those two, of course, turned bleak after this incident) during the 1957 youth festival. Furthermore, the museum and later the writer Chugunov (Oleg Basilashvili), head of local writers’ organization, informs Vakarin of an ongoing political feud between members of the Stalinist past and others trying to catch up with the modernity as promised by Western nations. Naturally, the feud only adds to Varakin’s confusion (obviously a symbolic figure representing the Soviet public) and eventually we once again see him alone, adrift in an oar-less boat on a fog-bound river.

Writer/director Karen Shakhnazarov and his co-writer Aleksandr Borodyanskiy view the shockingly absurd atmosphere as the consequence of constant upheavals in Soviet society. Influenced by ‘Gogolian’ humor and ‘Kafkaesque’ existential despair, director Shakhnazarov vibrantly stages each of Vakarin’s inexplicable troubles without ever depleting the comic energy in the narrative. The writing repeatedly hints at an objective reality, full of pretense and deception. For instance, the subjective perspective of Varakin is often at odds with the collective objectivity: only he is confounded by the naked secretary or the cake that resembles his face or the re-engineered past dispersed throughout the museum. This unsettling as well as preposterous picture of the community certainly offers a definitive comment on Soviet political and cultural upheaval. 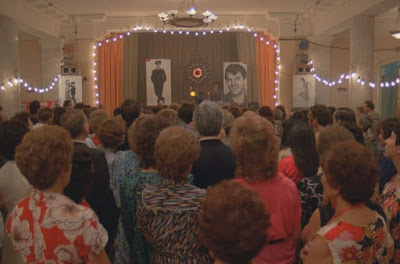 Furthermore, the premise offers an exploration of a past and present that’s emptied out of substance or meaning. Each of the enactments, bathed under flashlights and a overstated carnival score, plus the writer’s recollection of the town’s alleged historical significance deems to propagate a sense of deification (from Prince Dmitry Donskoy to rock ‘n’ roll) with zero meaning. If the town’s first rock ‘n’ roll performance (in 1957) carried a message of revolt, the jubilant mood in the present-time rock ‘n’ roll club (of 1980s) looks like a vacuous affair. The beautiful, young woman who danced with Nikolayev (seen in an energetic flashback sequence) visits Varakin at his hotel room, now a heavy woman with coarse features and literally robbed off her voice. She says (her son reads what she writes) Nikolayev has kept the ideals alive. But under the weight of political tyranny and disoriented truths, the ‘ideals’ seems to have worn out.

From a directorial perspective too, Karen Shakhnazarov amplifies the satirical nature of the scenarios (I am looking forward to repeat viewings to unearth many of the aesthetic treatments). Take the scene when Varakin is visited by various members of the town, each entering the room under different pretexts. They drink some beer, share dumplings, and sing a melody. The foundational notions of Soviet socialism comes alive for a brief time, before they all leave the room to pursue after a dubious historical story related to Grand Prince Dmitry Donskoy and an ancient oak tree. The visuals in the very last scene also vibrate with meaning: we see the museum curator gradually switches off the lights adoring the sugary re-enactments, leaving it to darkness (sums up what has to be done with this manufactured falsities) while Varakin drifts off into the mist (the absence of oar in the boat may underlines the atmosphere of hopelessness or uncertainty).

Overall, City Zero (103 minutes) is an engrossing sociopolitical allegory on the waning days of Soviet Union.