Akira Kurosawa’s grim feature I Live in Fear (‘Ikimono no kiroku’, 1955) was the first of the master film-maker's work to comment on the paranoia and fear of nuclear age (the other were ‘Dreams’ & ‘Rhapsody in August’). Made immediately after the completion of Seven Samurai, I Live in Fear was a notable commercial failure for the director. Nevertheless, the film is highly interesting for the way Mr. Kurosawa tackles the politically-minded subject in post-World War II Japan. Though a family melodrama than a piercing study of psychic and social toll of Japan’s nuclear attacks, I Live in Fear is watchable for the master’s astounding visual compositions and Toshiro Mifune’s grandstanding performance as the 70-year-old patriarch (the then 35-year-old actor in an excellent elderly man make-up). 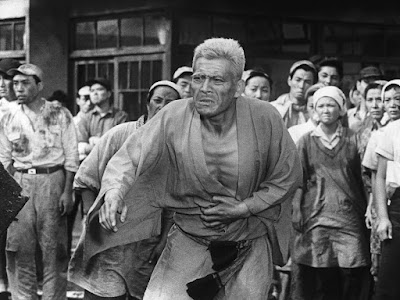 America’s occupation of Japan ended by the year 1952 and a year after that the Korean War commenced. It was labeled as ‘proxy war’ conducted by the two nuclear super powers. By 1954, US started conducting Hydrogen bomb testing in the Pacific that the Japan’s consumption of sea food drastically came down (owing to fear of contamination). With the new H-bombs more powerful than the ones annihilated Hiroshima and Nagasaki, the fear for impendingnuclear attacks was very real. Japanese cinema expressed this fear in a metaphorical and entertaining manner in its 1954 block-buster Godzilla (a monster created out of nuclear testing and radiation). ‘I Live in Fear’, on the other hand, isn’t simply an expression of the fear, pertaining to nuclear age, but also tries to showcase the disintegration of one's inner-self due to the suppression of that fear.

The opening credits capture the thriving urban modernity of Tokyo with shots of city’s populace moving through the junctions & streets in a frenzied manner. The story revolves around Kiichi Nakajima (Toshiro Mifune), a wealthy ageing patriarch who is brought to court by his own family to declare him ‘legally incompetent’. Nakajima runs a foundry company, staffed by faithful workers, and has full control over the assets. Lately, he has grown anxious of the H-bomb and the possibility of atomic holocaust. Enveloped by this mortal terror, Nakajima plans to move his entire family – including two mistresses and their offsprings – to Brazil where he believes they would be safe from the radioactive fallout. Nakajima decides to trade his family business with a Japanese businessman in Brazil for a farm. The old man’s legitimate children, especially the two adult sons, fearing that they would be robbed off their inheritance convince the mother to file a petition in court. When the family court rules against Nakajima, he files an appeal and takes drastic actions to supposedly save his offsprings.

At certain occasions, Akira Kurosawa studies this tale of madness and fear from the perspective of Dr. Harada (Takashi Shimura), a dentist who is one of the members of special counsel appointed by the family court. He and two other men hear Nakajima’s case. Although the ruling declares the patriarch legally incompetent, Dr. Harada is very sympathetic to the old man’s despair and convictions. The doctor feels so guilty about delivering the verdict that he starts reading a book on radioactive fallout. Shimura’s everyman character clearly serves as a window for audience’s entry into the picture (like us Harada is unable to judge Nakajima for his irrational behavior). Moreover, by maintaining a genial on-screen presence, Shimura balances the histronics of Mifune’s acting. Eventually, Dr. Harada’s objective observation serves an important role in perceiving the sour relationship dynamics within the Nakajima family without resorting to excessive melodrama. 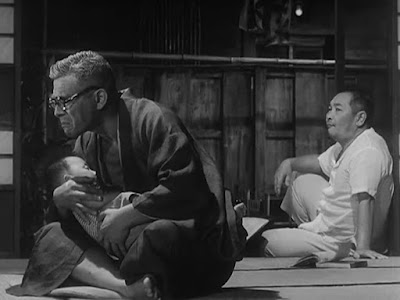 Even a lesser work from Akira Kurosawa boasts a kind of unique, understated visual sense that can’t be found in the alleged masterpieces of contemporary film-makers. In I Live in Fear, Kurosawa constructs a world where people have learned to abide by or disregard the existential fear, conjured by the external threats. In one marvelously staged scene, Nakajima vists his mistress and hears the shrieking sound of fighter plane jets (American jet planes patrolled the air over Tokyo even after 1952). Then there’s a flash in the sky. He immediately crouches on the floor, trying to protect his infant son. The young mistress, while calmly doing her chores at the kitchen, watches the old man’s actions with curiosity. It turns out that the flash is just lightning, not the blinding light of a mushroom cloud.

Kurosawa’s cinematic eye allows Nakajima’s descent into madness do all the talking. There’s something Shakespearean in the way Kurosawa imparts the particulars of Nakajima’s despair into the story, which precedes the legendary director’s later adaptations of Shakespeare’s Macbeth (Throne of Blood in 1957) and King Lear (Ran in 1985). I have found the film’s final scenes set in insane asylum to be utterly unforgettable. The shot of stairway in the asylum is particularly brilliant (the meaning of this shot was perfectly explained by this essay by Mr. Fred Kaplan).

The decision to cast Toshiro Mifune in the role of elderly man might have raised certain concerns. But Mifune was totally convincing as Nakajima, whose stylized performance is in fact oe of the positive aspect of the film. As always the actor brings a great physicality to the character. His transformation of controlled patriarch holding the family to the frailest of human being is painfully distressing to watch (Mifune is especially great in the moment his character apologizes to the loyal workers). 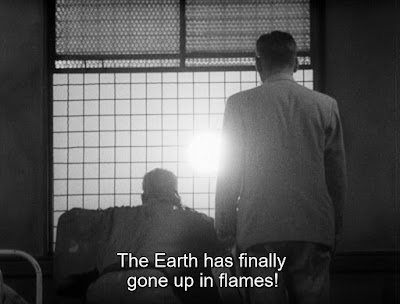 ‘I Live in Fear’ isn’t definitely an intensely subjective examination of a paranoid personality, unlike Jeff Nichols’ devastating Take Shelter (2011) or William Friedkin’s shockingly visceral Bug (2006). What Kurosawa grapples with is the idea of insanity and irrational behavior in the nuclear-age. Even though the fear of nuclear holocaust is a distant knowledge for us, we could attune to the film’s central message: how an unrelenting climate of fear ruins human existence.