Francesco Rosi’s reputation as the one of the best post-war Italian film-maker is built on his hard-hitting political dramas of the 1960s and 70s, which sought to maintain the “balance between reality itself and an interpretation of reality” [1]. Post-war Italian film-makers are generally divided into four generations with Rosi belonging to the significant second generation, who all worked under the great neorealists and yet their aesthetics was directed towards the then-contemporary political and social realism than to any distant memories of war and its aftermath (which was often viewed through a simple individual’s perspective). Rosi worked as an assistant director for the great Luchino Visconti, whose films evolved over time from classical realism (‘The Earth Trembles’, 1948) to critical realism (‘Rocco and his Brothers’, 1960).

Rosi labeled ‘critical realism’ as the ‘second phase of neorealism’, and further explained that, “In the beginning, neorealism involved only the attempt to be a witness to reality, with no critical perspective, just a desire to record reality. But this was not enough.” [2] Film scholar M.K. Raghavendra mentions in his essay on Rosi that, "…where neo-realism tries to be ‘truthful’, Rosi’s political films start from the premise that historical truths are elusive." [3] In fact, Rosi’s fractured, non-linear investigative style strives to reveal the hidden complicities underlying the official version of the facts. But while reconstructing the political past (by utilizing the methods of documentary cinema), Rosi also acknowledges that truth can be elusive, and that the truth beneath the ‘surface of events’ may never reach the larger public. 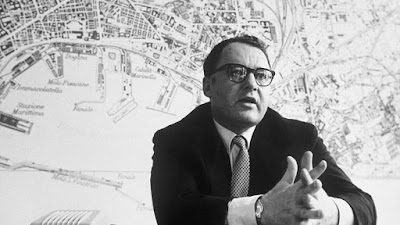 Unlike the other great political film-makers of the era (Gillo Pontecorvo, Costa-Gavras, Elio Petri), Rosi’s narratives neither commits itself to an individual’s emotional trajectory nor overtly satirizes the ideological intentions. His quasi-documentary approach remains intriguingly ambivalent, never representing the political or social reality through the experiences of one of the characters, feigning objectivity. Rosi’s Salvatore Giuliano (1962) isn’t a conventional biopic on the brutally murdered real-life Sicilian bandit, but rather a layered exposé of the corrupted relationship between political establishment, mafia, and business interests. The larger-than-life titular character is largely (and strangely) absent from long sketches of the narrative and never viewed up-close (literally & emotionally).

With Hands Over the City (‘Le mani sulla citta’, 1963), Rosi returns to his native Naples to dramatize an inquiry set in motion by members of the Naples City Council to decide on the culpability of the City in the collapse of an decrepit apartment building, killing two and severely injuring a boy. The members of the inquiry, predominantly led by councilmen of ruling right-wing party, have already made their decisions, and most importantly they want to keep the inquiry focused only on this single event. A determined city council member of the Communist Party named De Vita (Carlo Fermariello), however, is more interested in exposing the confluence of politicians and real estate power brokers whose appalling ethical compromise is the root of the problem. 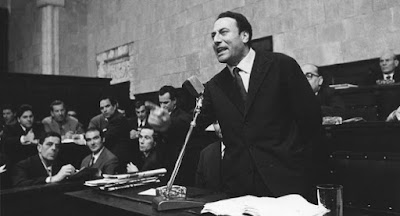 But at the same time, Hands Over the City is not a film with protagonists or antagonists, and it doesn’t withhold any greater sense of mystery. Rosi clearly chronicles the civic corruption in the opening frames of his narrative as elected councilman and land developer, Edoardo Nottola (Rod Steiger) speak of transforming the city-owned land by constructing high-rise apartment buildings.  Nottola, his ruling right-wing party, the mayor, and city’s construction agencies choose any site they fancy, and start the work without bothering about official approval or zoning laws. Nottola promises his party men that it’s a no-risk venture, assuring a five thousand percent return on their investment. The huge profits apart from filling the politicians’ pockets eventually fills the party’s coffers, which is just as good since election is coming up.

The risk factor comes into play when an old building collapses while Nottola was building a new one nearby. Nottola rushes to the scene, but to discreetly transport his son, who was supervising the construction. When the mayor is pressured by his Center Party allies, he sets up an inquiry, which includes the earnest council member, De Vita.  But De Vita’s further attempts to prove the wrongdoing takes him through a moral black hole of the city council. As he exasperatedly observes, “Compliance is only verified after an incident. Each department did its job. Let people die.”  Nevertheless, De Vita’s acute understanding of the corruption at the heart of housing speculation gains the attention of a fellow council member and a Center party representative, Balsamo (Angelo D’Alessandro). Yet it looks like a near impossible task to challenge the political structure that permits corruption to thrive. 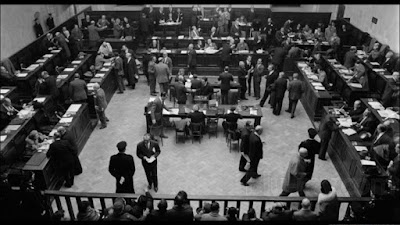 Hands Over the City is one of the most coherent and accessible films of Francesco Rosi. But similar to the central figure in Salvatore Giuliano (1962), the anti-hero of this film – Edoardo Nottola – remains distant throughout the narrative, and is also frequently absent from the screen. Nevertheless, such distant approach to character is a signature of Rosi, who concentrates more on the political machinations than interpersonal dynamics. Rosi does show Nottola wordlessly contemplating (a long sequence unfolding against a blaring musical score of Piero Piccioni) and (quietly) making decisions without an iota of regret or remorse. But what’s missing here is the character’s interiority (something Rosi deliberately does in his films). Moreover, De Vita although sounds like a heroic figure, is often seen downcast and frustrated, perfectly exuding the emotions of a good-hearted politician, who is playing the game for a long time despite being aware of the grim results (it is no wonder  Carlo Fermariello brilliantly plays De Vita as he is not a professional actor, but a elected councilman). The characters of De Vita and Balsamo suggest the presence of a didactic intent on the part of film-maker (in fact, De Vita delivers a thunderous speech in the final scene). But the authenticity with which the characters are presented (acknowledging their limitations) purges any notions of grandstanding or didacticism.

Francesco Rosi’s showmanship does garner our attention in key scenes, in spite of his quasi-documentary approach of filming in real locations and presenting real social problems. For instance, framing Nottola in front of his office wallpaper (a huge canvas of Naples city map), signifying how the cityscape is a plaything for Nottola and his fellow council members. The theatricality of the allegedly outraged conservative council members when accused of having ‘blood on their hands’ is one of the memorable visual moments in the narrative (Rosi films the gallery of council members in a long shot and a closer view from behind as they cry out, “Our hands are clean!”). 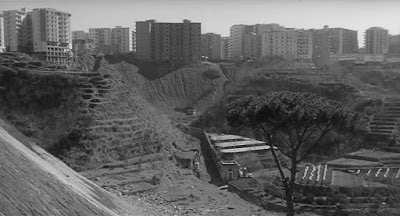 Eventually, what makes Hands Over the City (101 minutes) a powerful feature among the Italian political cinema (Cinema Politico) is the universality and continuing relevance of its themes. Rosi ends the film with the timeless text, “The characters and events shown are imaginary. The social and environmental context is real.” Expelling the didactic intent or the expository writing of political cinema, Rosi uses the cinematic medium to design a form of activism that not only zeroes-in on an indisputable sociopolitical reality, but also attempts to awaken the sleeping consciences of those who prefer not to see.