Elio Petri’s Investigation of a Citizen Above Suspicion (1970) is a grotesque, political satire that seems to be cut from the same cloth of Kafka’s parable. Our essential notion of law is based on the general principle of equality and non-discrimination. But what if ‘law’ is just another institution which castigates humanity and is driven by norms and rules closely linked to fascist ideology? Law as an iron fist institution will only uphold hegemony and pat on the back of a rigidly structured ideology. In such a scenario, the ones with a power to (legally) judge will always be placed out of the bureaucratically enforced rules and norms. The powerful figures of bureaucracy become the noble class, enjoying their exclusive access to law to perpetually repress the common citizens. 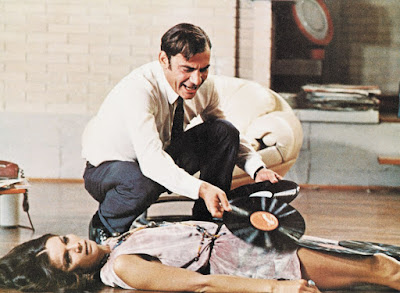 Petri’s incendiary political drama, Investigation of a Citizen Above Suspicion is based on this particular idea that some citizens are above suspicion. It’s just like the famous quote in Orwell’s Animal Farm: “All animals are equal, but some animals are more than equal.” The film, nevertheless, opens like a conventional crime genre film. Adorned by Ennio Morricon’s flamboyant musical score, in the opening frames we see a man discreetly entering his mistress’ Roman apartment. He kills her with a disposable razor during sex. But uncharacteristically, the killer starts leaving ample clues to implicate him in the crime. He leaves finger and foot-prints all over the crime scene. He leaves a large sum of money for the investigators to strike off robbery as a motive. Furthermore, he leaves a loose thread of his lavender silk-tie in one of the murdered woman’s sharp nails.

Before leaving the crime scene, the man makes an anonymous call to the homicide department. Finally, while leaving the apartment building, he walks out in the presence of a young man, a ploy to secure a witness. Later in the narrative, a homicide detective tells his department chief, “The killer must be an idiot”. The chief agrees, “Yes, an idiot”. But the detective doesn’t know that his chief (Gian Maria Volonte) is that killer. Of course, the unnamed sociopathic chief has killed his lover, Augusta Terzi (Florinda Bolkan) to absolutely prove his hypothesis that he is ‘above suspicion’. The narrative brilliantly and viciously chronicles the chief’s power trip, starting from his return to the crime scene, now as an investigator, and he once again touches everything in the apartment. 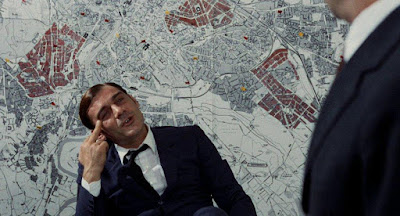 Elio Petri often cuts to flash-backs, recounting his days with Augusta. Augusta Terzi is clearly fascinated by the power the chief of homicide department withholds. His affair with Augusta gradually leads to erotic games based on staging of murder scenarios. This explains the film’s opening exchange between Augusta and the chief: “How are you going to kill me this time?”, she teasingly asks, to which the man replies, “I’m going to slash your throat” and then embraces her. The fetish for staging and photographing the homicide scenarios reflects the protagonist’s infantilism and psychosexual conflict, which he effortlessly masks in the public by being a traditional patriarchal figure to the lawmen, relentlessly exuding macho attitudes.

In fact, apart from wickedly testing the boundaries of his power, the chief kills Augusta because her fascination with his power gradually wanes, and she expresses contempt over his sexual inadequacy and arrested sexual development. He thinks that by teasing his sexual shortcomings, she has indirectly derided his authority. Hence that becomes the hidden motive, which becomes clear as the protagonist causes more chaos. On a broad scale, Petri uses the chief’s pre-occupation with power to examine how the system of law deems which citizens are ‘above suspicion’ and which citizens are the ‘natural suspects’. After striking out Augusta’s husband’s involvement in the murder, the police considers her upstairs neighbor, Antonio Pace (Sergio Tramonti), a young anarchist, the same man who had ‘accidentally’ seen the inspector chief leaving the crime scene.

Nevertheless, the chief doesn’t want an innocent person to take his place. As he argues to himself, “if you send an innocent man to prison in your place, then the fact that you're above suspicion has not been proven.”  So, he wants the officials above and below him (in the power ladder) to know he is the culprit and yet be absolved of his crime (because he’s ‘above suspicion’). Director Petri wants to showcase that in an authoritarian power structure, the ones who are legally deemed as ‘guilty’ has nothing to do with committing a crime, but they are unlucky to fall under the parameters (grounded in social status, ideology, and race) of guilt.

This is splendidly emphasized in a scene the inspector chief delivers a thunderous monologue, addressed to his colleagues, increasingly blurring the lines between criminal activities and democratic expression of dissent. He equates a bank robbery with subversives involved in strikes and sit-ins: “They both have the same objective. They just use different methods. Their objective is to overthrow the current social order.” This insightful trip into the mind of a power-wielding fascist ends on a thoughtful note. He proclaims: “Let others take up the task of healing and educating. Our duty is to repress them! Repression is our vaccine! Repression is civilization!” 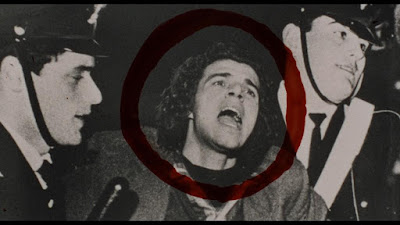 Although Investigation of a Citizen Above Suspicion opens as a traditional crime film, it is much more than a narrative about a powerful man getting away with murder. It was both a timely as well as timeless exploration of how authoritarian power works and thinks. In the film’s beginning, the unnamed chief of homicide department is promoted as the chief of political intelligence. Augusta Terzi’s murder happens on his last day in homicide. Political Section is ostensibly engaged in a bigger operation, wiretapping thousands of alleged ‘subversives’, ‘anarchists’, and ‘leftists’. While walking through a long corridor of files (collected through eavesdropping and wiretapping) and entering into a room consisting of a wall-length computer (that instantly searches for the files on subversives), the chief’s lust for power reaches a crescendo (he gleefully shouts, “America has arrived!”).

Elio Petri and his co-writer Ugo Pirro’s acerbic portrait of corruption and fascism were considered timely because it perfectly reflected the actual political situation in Italy in the late 1960s. In the Senses ofCinema article (by Gino Moliterno), it is mentioned that when Petri privately screened the film for his contemporaries Mario Monicelli and Ettore Scola, though they were enthusiastic about the film, they also agreed to the possibility that Petri is going to end up in prison. In the wonderful Criterion essay (by Evan Calder Williams), I learnt how Petri throughout his short career (he made only 12 films and prematurely died of cancer at the age of 53), was reprimanded by both the studios and far-left critics (one side feeling Petri is too political, whereas the other side lambasting him for not being deeply political). 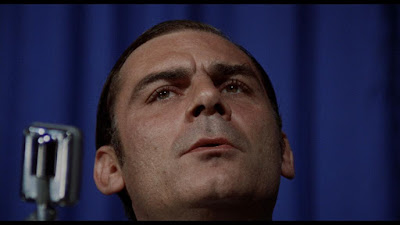 Yet despite the widespread political unrest of the time and the vitriolic critique from the far-left, Investigation of a Citizen Above Suspicion was the single biggest successful film in Petri’s career, reaping both awards and blockbuster status. The film won two awards at Cannes (Jury Prize and International Critics’ Prize), and eventually got the Best Foreign Academy Award (while it was also nominated for ‘Best Original Screenplay’).

Alongside Investigation and the two films Petri made immediately after it – The Working Class Goes to Heaven (1971) and Property Is No Longer a Theft – they came to be collectively known as ‘Trilogy of Neurosis’. The inspector chief at one point in the narrative states, “It’s a disease I probably contracted from my prolonged use of power. It’s an occupational disease.” As the Sense of Cinema article emphasizes, if 'Investigation' “had been an exploration of the neurosis of power, The Working Class Goes to Heaven was meant to explore the neurosis of work, while Property is No Longer a Theft (1973) caustically satirized the desire for property and money as pathological.”

Like any stories dealing with infallibility of law and bureaucracy, 'Investigation' is riddled with Kafkaesque strains. In fact, Petri ends the film with Kafka’s quote (from his 1915 novel ‘Before the Law’): “Whatever he may seem to us, he is yet a servant of the Law; that is, he belongs to the Law and as such is set beyond human judgment.” Just like what Kafka does with his pointed tales, Petri makes a critique of power and reveals the obscure mechanisms (largely invisible to the common populace) essential to keep rolling the wheels of hegemony. Eventually, apart from Petri’s clear-eyed direction, Investigation’s success and impact is multiplied due to Volonte’s emblematic central performance.  The perverse delight with which he flaunts his culpability and his earsplitting speeches perfectly realizes a fascistic creature.

Overall, Investigation of a Citizen Above Suspicion (115 minutes) is a grim allegory on the nature of unchecked power and authority that isn’t far removed from the political realities of the present. Elio Petri employs absurdist, satirical narrative tone to make us face the hard truths about the 'true' status of law that’s both unsettling as well as thought-provoking.