The bonafide Hollywood Superstar Kirk Douglas was best known for playing discomfited small-town reporter Chuck Tatum in Billy Wilder’s Ace In the Hole, a humane commanding officer in Kubrick’s Path of Glory (1957), the rebellious slave in Spartacus (1960), a reprobate movie producer Jonathan Shields in Vincent Minnelli’s The Bad and the Beautiful (1952), the revered painter Vincent Van Gogh in Lust for Life (1956). He also played excellent roles in Out of the Past (1947), Champion (1949), Gunfight at O.K. Corral (1957), Seven Days in May (1964), Last Train from Gun Hill (1959), etc. But Mr. Kirk Douglas himself considers playing John W. Burns (a lone cowboy smothered by disorienting modern times) in David Miller’s Lonely Are the Brave (1962) as his most favorite moment in the long career. 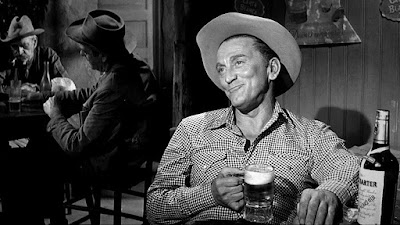 Dubbed by British film-maker Alex Cox as ‘leftist American Western’, the film was based on Edward Abbey’s 1956 novel The Brave Cowboy. The novel was adapted into script by Douglas’ friend and the most famous among Hollywood’s blacklisted professionals Mr. Dalton Trumbo. Although Trumbo started working on the script by 1958, two other Kirk Douglas star vehicles – Spartacus & Robert Aldrich’s The Last Sunset (1961) – released before it. By the time Lonely Are the Brave released into theaters, the blacklist was lifted (although it took few more years to reinstate the Oscars Trumbo won for script writing which he wrote under pseudonyms), but unfortunately the movie wasn’t a commercial hit. Despite writing in an era of despair, Trumbo didn’t use the material to preach. He writes a simple yet powerful character study of a tragic Western hero, where the actions speak for itself.

Director David Miller didn’t have a distinguished film-making career. Except for the noir thriller Sudden Fear (1952) starring Joan Crawford, Mr. Miller’s projects were mediocre at its best (after Lonely are the Brave, Miller once again worked with Trumbo for the reasonably good conspiracy thriller Executive Action). However, David Miller’s exploration of extremely polarizing American society and disarrayed system is full of subtle visual cues which we don’t often see in studio-backed Western films. Trumbo’s meticulous, non-didactic script touches on themes of individual freedom, illegal immigrants, systemic crackdowns, escalating militarization (themes which are more relevant in contemporary America).  The film opens with a spectacular scene: a cowboy breaking his mischievous and clumsy horse Whiskey on the open range. The atmosphere and the playful character is something we have seen in hundreds of Westerns. But when the cowboy lifts his hat to look up he sees jet smoke in the sky. Suddenly we are bestowed with the fact that the tale isn’t set in mid or late 19th century, but at the present (early 1960s). 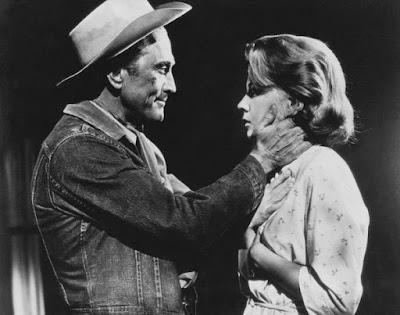 The cowboy named John W. Burns (Jack for short) rides through New Mexico, cutting the barbed wires established by private corporations, not because he is a proletarian who condemns private ownership, but simply because he is a genuine free-spirited soul. There’s a beautiful shot when Burns and Whiskey ride into town, crossing the very busy road. As he struggles with his horse in the middle of the road with cars & trucks blasting through, the predicament of the cowboy in modern reality becomes plainly visible. Burns rides to his best pal Paul’s (Michael Kane) house where he learns from his beloved wife, Jerry (Gena Rowlands) that he is in jail. Paul is imprisoned at the local prison for providing sanctuary to illegal Mexican immigrants. Burns decides to help his friend before he is moved to upstate prison. He deliberately gets himself in a fight at local bar and that too with a bullying one-armed war veteran.

Later at the police station, when the officer turns him loose since the prisons are full, Burns delivers a vigorous blow on the lawmen. With an amplified charge-sheet that will at least get him a year, Burns finally meets Paul in the cell in order to tell his plans of breaking themselves out. However, Paul denies the offer as he doesn’t want to bring more misery on himself and his family. He doesn’t want a life on the run. It is evident that despite an undeniably charming posture, Burns is deeply averse or even afraid to modern rules and the enclosed spaces. After failing to persuade Paul, he decides to breaks out on his own. He takes Whiskey across the vast, open wilderness. A disdainful, annoyed local sheriff named Morey Johnson (Walter Matthau) leads the police pursuit. The odds are clearly stacked against Burns’ mad dash to Mexico, since military men volunteer themselves to track down the cowboy in helicopter (the general calls it a practice). We hope that the cowboy dodges his pursuers, metaphorically rising his middle finger to the stern system.

There are plenty of fascinating touches in Trumbo’s character sketches. The relationship between Burns and Jerry is at once both enigmatic and deeply emotional. They both have been friends from childhood and it’s evident that Jerry is in love with Burns, but Trumbo’s writing doesn’t denigrate their connectedness or romanticizes it. Although Trumbo’s characters involve themselves in acts against the system, he doesn’t charge it up with overbearing ideology. Paul’s act of human decency, Jerry’s decision to commit herself to son Seth and husband, Paul and Burns’ non-conformity stand against government thugs could be understood and related without scrutinizing it through a political lens. 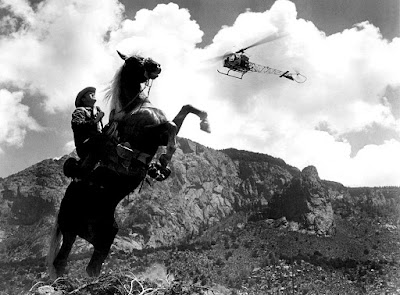 Director David Miller does a commendable job in realizing Trumbo & Abbey’s vision of inhumane, apathetic modern world. Flawlessly photographed by Philip Lathrop, each expertly staged scene brims with naturalism. The barroom fight and shots of Burns gliding up the mountain with rocks tumbling down creates truly menacing atmosphere. The best scenes in the film are when Burns tries to break in Whiskey in order to help him escape. On such occasions, the disobedient Whiskey stands-in as representation of cowboy’s existential crisis. He repeatedly tries to hold onto its rein, the struggle reflects his broad struggle with the external factors to hold onto his cherished vision of freedom.

It’s understandable why Kirk Douglas loved playing this flawed yet fascinating cowboy. There’s a sense of calm or lack of forcefulness in his performance. There’s no extra glorification added to celebrate Burns’ act of self-preservation. Douglas eventually lets Burns be the confused guy and the one detached from reality without trying to justify himself verbally. The supporting cast including Gena Rowlands and Walter Matthau are also nothing short of excellent. Matthau’s splendid sardonic humor dispels the otherwise gloomy chase. Nevertheless, the film ends with one of saddest and most memorable shots. The dazed look of the cowboy, the empathetic gazes of passersby, the blaring horse writhing in pain, and the relentless downpour; ‘will humanity ever triumph over the inflexible, conformity-seeking world?’ the question haunts our mind as we look at these most brilliant visual compositions.

Lonely Are the Brave (108 minutes) is a singular and achingly sad Western drama about a fiercely independent cowboy fleeing away from the clampdowns of modern industrialized society.