The Mattei Affair [1972] – A Hard-Hitting and Idiosyncratic Political Drama

By blending documentary and reportage elements as well as incorporating realistic mise-en-scene, Italian film-makers of late 1960s and early 1970s provided an alternative and different point of view of their country’s political and social reality. The films of Francesco Rosi, alongside Elio Petri, Valerio Zurlini, Pasolini, Taviani Brothers, and Ettore Scola, featured a particular critical tendency in depicting the social and political events of Italy, which were expressed on an artistic level through a distinct form. Within such a revolutionary atmosphere, Francesco Rosi not only plucked out his contents and themes from the reality, but also found a new way of representing the socio-political reality. Rather than ratifying reality or wildly dissenting against it (by sensationalizing the conspiracy theories, the way Oliver Stone did with JFK [1991]), Rosi’s filmic text and image gracefully questions the reality without ‘interpreting’ it. 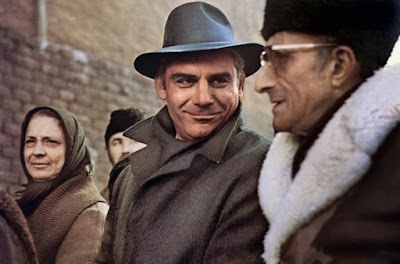 The Mattei Affair (Il caso Mattei, 1972) was one among the three best Francesco Rosi’s works, the other two being Salvatore Giuliano(1962) and Hands Over the City (1963). The Mattei Affair shared the Palme d’Or at Cannes with Elio Petri’s The Working Class Goes to Heaven. Similar to Salvatore Giuliano, the film opens with the controversial death of the eponymous character, and gradually tracks down the man’s remarkable role in the public arena. Referred as the “The most important Italian since Julius Caesar”, Enrico Mattei (1906-1962), the subject of the story, is a maverick politician and CEO of the state-owned business empire ENI (Ente Nazionale Idrocarburi) aka Nation Fuel Trust, who upon discovering natural gas reserves (methane; and little oil) in the late 1940s in Northern Italy’s Po Valley sought to turn it into a national energy source.  Moreover, Mattei emerged as a powerful player in the world stage when he started building an independent network of oil consumers and producers, by-passing the monopoly of Anglo-American companies (which Mattei nicknamed ‘Seven Sisters’) that dominated the post-World War II oil industry (especially in the Middle East).

Similar to his previous entries in the Cinema Politico, Rosi’s The Mattei Affair is an innovative ‘film investigation’, examining the economic boom of post-war Italy and the disturbing geo-political realities of the Cold War. The film’s release in 1972 was considered to be timely as the OPEC oil crisis (of 1973) brought to world’s attention the politics of oil production. Before the 1973 crisis, the Seven Sisters controlled 85 percent of the world’s petroleum reserves (by mainly exerting control over Third World oil producers; after 1973, it was all under the dominion of OPEC cartel and state-owned companies). 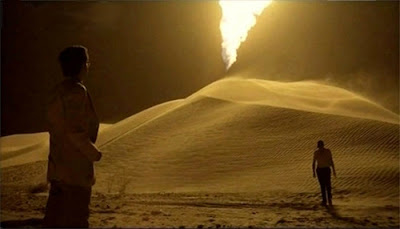 Francesco Rosi opens the film as an investigation into the mystery behind Mattei’s accidental death. On October 27, 1962 on a journey from Sicily to Turin, Mattei’s private aircraft crashed during a violent storm. All three men on board – Enrico Mattei, pilot Bertuzzi, and American Time-Life journalist William McHale –died. The death was tainted by suspicion, the general consensus of the time and the later investigation (in the mid-1990s) alluded that the industrialist and politician was deliberately killed by a bomb on board. The usual suspects behind Mattei’s alleged assassination were: the CIA, OAS (far-right wing French terrorists), and the mafia. Mattei’s venomous criticism on the US and French government is well publicized.

Through ENI, Mattei sought to access hydrocarbons in Algeria, once the country achieved its independence from the French colonists. Mattei publicly announced that he would do business with Algeria’s National Liberation Front (FLN) and reprimanded French government’s colonial enterprise.  This put him in the ‘black list’ of OAS. A reformed mafia chief named Tommaso Buscetta, in May 1994, claimed that Mattei was murdered at the request of the Cosa Nostra, a crime syndicate in United States with close ties to the Sicilian mafia. The motive was obvious: Mattei’s political stance is causing harm to the American interests in the Middle East. Many details regarding Mattei’s suspicious death weren’t known by the time Francesco Rosi’s riveting film released. Yet by the 1990s, Italian law enforcement reclassified Mattei’s death as homicide although no suspects were identified. 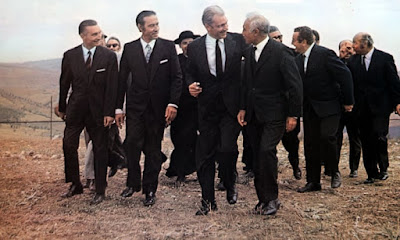 Rosi unfolds Mattei Affair through a complex flashback, piecing together fragmented bits of information available on Enrico Mattei in the public forum (the archival footage of interviews and speeches), and by including distinct perspective of men closer to Mattei. Keeping intact the enigmatic aspects of Mattei’s personality, the variety of materials accumulated on the central figure gradually reveals the social and political reality in which he thrived and struck down. Similar to the narrative tactics Rosi used in Salvatore Giuliano and Hands Over the City, the film-maker focuses less on his protagonist’s private life and predominantly explores his public life. As Rosi himself once said, “In the general economy of stories, personal lives have no real importance” [1].

Film critic and scholar M.K. Raghavendra explains Rosi’s choice in this manner: “Rosi desists from trying to give us the ‘true’ person as fictionalized biographies like David Lean’s Lawrence of Arabia (1962) usually do. There is no sequence, for instance, in which his ‘sincerity’ is emphasized” [2]. Rosi makes up for this intriguing lack of psychological exploration (or dramatizing the private life) by perfectly casting the most charismatic Italian star, Gian Maria Volonte. Mr. Volonte does a great job of not sentimentalizing the role. When we comprehend the full effect of Mattei’s battles and the nature of his nemesis, an emotional identification of sorts is formed, unlike the very limited perspective of Sicilian bandit in Rosi’s 1962 masterpiece.

Apart from Salvatore Giuliano (1962), the story of trying to piece together a popular man’s life (the fragmented flashback structure), reminded many critics of Orson Welles’ landmark cinema, Citizen Kane (1941); though the subject chosen here was ‘very real’ and circumstances surrounding his death was fresh in people’s minds. Film critic Jonathan Rosenbaum called The Mattei Affair, “a sort of semi-fictional Citizen Kane without a Rosebud” [3]. Nevertheless, unlike any (based-on-real-events) political dramas of the later era, Rosi preserves the enigma of the man and also enhances the mystery surrounding his demise (rather than opting to manipulating the material in order to offer a ‘plausible’ theory). Rosi’s intention isn’t to just raise doubts and asks questions about Mattei’s life and death. He uses Mattei (or the ‘biopic’ narrative) to intensely and objectively look at the wider political realities that don’t feel far removed for the contemporary international audience. Like the masterful work of a great political film-maker, Rosi’s The Mattei Affair is infused with skepticism about the historical truth (or the official verdict), but his narrative representation (of the source material) never slips into exploitative territory. 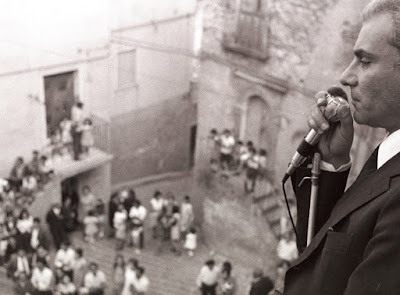 Rosi’s examination of Enrico Mattei’s life starts in the immediate aftermath of Second World War (in 1945) when Mattei was hired to shut down the Italian State Oil Company, AGIP. But after stumbling into a research account on Italy’s vast reserves of natural gas, Mattei sought to turn Italy into an industrial powerhouse (As he himself put it, “I transformed Italy from a country of song and dance to an industrial power”). Though Mattei was a member of Christian Democrat Party by this time, and was a partisan fighter during the war, in 1931 he became a member of the Mussolini’s National Fascist Party (he was, however, not active in politics and mostly involved himself in industrial activities). When a journalist questions Mattei’s political affiliations in the narrative, he cleverly states, “I use them like a taxi. I get in, let them take me to my destination, look at the meter, pay, and leave.” Mattei built his industrial empire (through ENI) in the 1950s by making deals with former fascists as well as the communists.

When the cartel of American, British, and French oil companies denied ENI a place, Mattei directly went to the Shah of Iran (in 1957) and signed an accord. In 1959, he went to Moscow to negotiate the purchase of crude oil from Soviet Russia. In the film, Rosi observes Mattei standing in a long queue in the Red Square to visit Lenin’s tomb, expressing his earnestness in doing business with the Soviet government. Mattei did it all in the midst of the Cold War, when West European democracies and US were clear-cut about their archenemy. One of the most memorable sequences in the narrative (apart from the glorious scene set in Gagliano, Sicily), was Mattei taking a newspaper man on a trip from Italy to the oil fields of Middle East, delineating the politics of oil. “The Middle East has 80% of the world's reserves. You and I and millions of others in the world…work, eat, dress, ride cars, are warm, have fun……thanks to the riches here. Yet Arabs are starving. The oil is taken from under their noses. They keep their poverty, illiteracy…infant mortality…a thousand other problems,” states Enrico Mattei, which doesn’t seem to just specify the geopolitical context of the 1970s.

There’s also a double-edge to the mystery scrutinized in The Mattei Affair. After deciding to shoot a move on Enrico Mattei, Francesco Rosi, in 1970, hired Italian journalist Mauro De Mauro (played by Aldo Barberito in the movie) to conduct an investigation on Mattei’s two days in Sicily (before the fateful plane crash). Mauro retrieved an audio-tape of Mattei’s last speech, and eight days after receiving the audio-tape, in September 16, 1970, Mauro disappeared. It was said that before his disappearance or presumed kidnapping, the journalist has told his colleagues, “I have a scoop that is going to shake Italy.” What’s more interesting about Mauro’s disappearance is that the investigators who pursued leads in the case were also later killed. Even Rosi appears as himself in the movie, asking questions about De Mauro’s disappearance. There’s also a theory that Mauro’s kidnapping (and murder) doesn’t have anything to do with his investigation on Mattei’s death, but the result of Mauro uncovering a (failed) right-wing coup d’etat.

Apart from extracting a powerful performance from Volonte, Rosi has collaborated with some of the best Italian artists to make Mattei Affair. Rosi’s co-writer was Tonino Guerra, prolific and veteran screenwriter who has worked with Michaelangelo Antonoini, Frederico Fellini (and even with Takovsky in Nostalghia [1983]). The mosaic structure of the narrative duly avoids ‘entertaining’ viewers and never foregrounds sentimental action. The film was lensed by Oscar-winning cinematographer Pasqualino De Santis, known for his high-profile collaborations with Robert Bresson and Luchino Visconti (reputable Italian editor Ruggero Mastroianni has also done a great job, the cutbacks slowly revealing the biographical details are fascinating to behold).

Overall, Francesco Rosi’s unflinchingly objective interrogation of the oil monopolies and crony capitalism through the tale of an ill-fated industrialist in The Mattei Affair (116 minutes) conveys us some timeless truths. “Why haven't you explained in your newspapers what oil really means? You never explained that oil……makes governments fall. Creates revolutions, coups d'etat. It determines world balance. You don't say that,” Enrico Mattei emphatically states, and nearly five-decades since the movie’s release, those words still reflect the current political realities.

at April 30, 2020
Email ThisBlogThis!Share to TwitterShare to FacebookShare to Pinterest
Labels: Based on True Story, Italian Cinema, Political Movies