Drunkel Angel (‘Yoidore tenshi’, 1948) although not one of Akira Kurosawa’s acclaimed masterpieces, is definitely a landmark cinema in the director’s oeuvre. The film marked the first collaboration between Kurosawa and Toshiro Mifune, a dynamic actor famous for playing righteous samurai characters and for his on-screen showcase of explosive rage. The collaboration lasted over 16 films, and until the 19th century drama Red Beard (1965). Drunken Angel was also considered as the director’s breakthrough movie since he made it on his own terms, tackling head-on the pervading corruption in post-World War II Japanese society. Drunken Angel is a melodrama, chronicling the delicate bond between a brash, young yakuza guy (Toshiro Mifune) and an older alcoholic doctor (Takashi Shimura). But the dynamism visible in Kurosawa’s aesthetic approach turns this drama into one of the director’s intriguing early stylistic experiments. 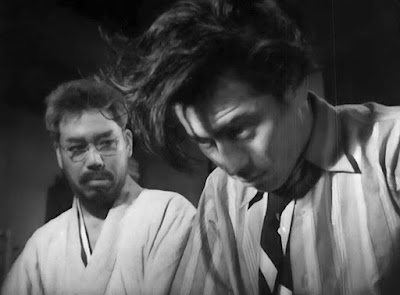 Drunken Angel is set around a yakuza-controlled black market square where bars and dance-halls loudly broadcast American pop tunes, and a fetid swamp occupies the center of neighborhood. In fact, the film opens with the shot of large cesspool (in close-up) which constantly bubbles. It becomes the fitting metaphor for post-war Japan’s sickly state of affairs. The swamp is a  character in itself as Kurosawa often uses the image as a transition device to chart the gangster’s self-destruction. The mosquito-ridden swamp also literally passes off disease to neighborhood members, particularly the vulnerable, mal-nourished children who use the ghoulish place as a playground. The gruff yet well-meaning slum doctor Sanada lives near the swamp and does his best to redeem the surrounding atmosphere, even though he very often fails.

Matsunaga, the local yakuza leader, comes to Sanada’s clinic to treat a bullet wound. Dr. Sanada is a very blunt guy and decries the young yakuza’s lifestyle without fearing for violent reactions. Sanada warns Matsunaga about the onslaught of tuberculosis, and to halt his drinking habit. The erratic gangster tries to beat-up the doctor for his blunt talk, and the doctor responds by throwing things at him. Although Matsunaga continues to drink and party, his worsening condition takes him back to the clinic. He’s once again castigated by the doctor and angrily leaves the premises. Nevertheless, gradually Matsunaga comes to trust the doctor. 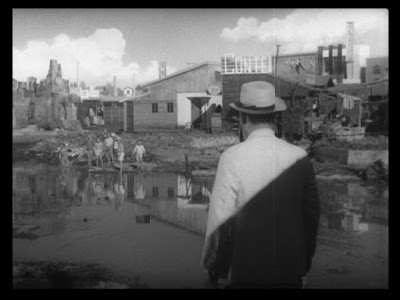 Furthermore, Dr. Sanada becomes increasingly concerned for the gangster. At the same time, circumstances work against Matsunaga’s well being. An older, wayward crime boss named Okada (Reisaburo Yakamoto) returns from jail and regains his position, which was awarded to Matsunaga. Okada’s return also spells trouble for the doctor, since he is shielding the crime boss’ abused mistress Miyo (Chieko Nakakita), who now works as the doctor’s nurse. And, Matsunaga despite coughing up blood and on the doorstep of death feels he must ensure Sanada’s safety.

Drunken Angel works as a cultural and social critique, taking a jab at both the ‘old’ feudalistic concepts of honor & loyalty and war-torn nation’s struggle against rampant westernization. In fact, the American occupation of Japan ended only in 1952. Dr. Sanada scowls at Matsunaga’s mention of yakuza code of honor. The young hoodlum’s frantic belief in the gang hierarchy could easily be connected with the betrayal of feudal system which only escalated the war efforts. Okada is a literal representation of obsolete feudalism, trying to once again gain his authority in a rapidly changing neighborhood. 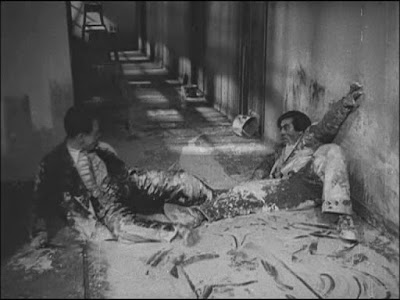 The dingy corridors of night-club and bars stand on the other extreme, conveying the general corruption brought upon by the occupying American forces. Akira Kurosawa kept on returning to these ruined corners of Tokyo. As a matter of fact, Kurosawa followed Drunken Angel with The Quiet Duel (1949), which was about a young doctor (Mifune) who accidentally contracts syphilis while operating on a patient.  The Lower Depths (‘Donzoko’, 1957), based on Maxim Gorky’s play was set on the edge of a garbage dump. Perhaps, the most scintillating portrait of Tokyo’s shanty towns among Kurosawa’s filmography was in Clickety-Clack (‘Dodes’ka-den’, 1970); Kurosawa’s first color film has interestingly focused on urban trash heap.

Drunken Angel was Mifune’s fourth film. In his previous films, Mifune played volatile hoodlums and hence he was cast according to type. But only under Kurosawa’s direction, the actor was able to bring forth a humanism and longing to the otherwise one-dimensional character. Wearing a flashy white suit, Mifune often bursts into the scenes with great power that he could be mistaken as the titular character The actor actually had a small part, but Kurosawa impressed by Mifune allowed the character to share equal screen-space with Dr. Sanada.

As always, Shimura - appeared in 21 of Kurosawa’s films - subtly embodies the role of a mentor/spiritual guide. The frustration, gruffness, and tenacity Shimura imparts to Dr. Sanada keep the character far from being a tedious, saintlike man. Visually, Kurosawa’s presentation of the dreary atmosphere bestows a chilling and somber movie experience. The first confrontational scene between Matsunaga and Sanada, the nightclub dance scene, and eventually the frenzied fight between Okada and Matsunaga which uses bit of silent-film aesthetics are all some examples of the director’s galvanic staging techniques. 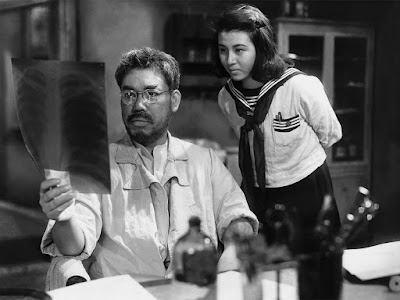 While Kurosawa concentrated on pointless cruelty and irrationality of the mankind in Drunken Angel, he does end the film with a quick optimistic ending. Actress Yoshiko Kuga who has worked with Yasujiro Ozu, Kenji Mizoguchi, Nagisa Oshima, etc plays a cameo role as a feisty school girl fighting TB. Dr. Sanada considers her a symbol of rationality and will power, challenging the overall animalistic tendencies of the post-war society. The doctor leaves the lingering thoughts of failure and grief and accompanies the young girl through the cacophony of black-market to buy sweets.

P.S. the censors were alleged to have imposed that final ‘optimistic’ flourish.