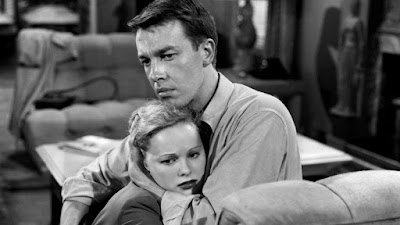 Gun Crazy was director Joseph H. Lewis’ best work, using every brilliant visual tricks at his command though working on a very low-budget. The script was written by Dalton Trumbo (since it was the Hollywood black-list era, Millard Kaufman was used as his front; the credit restored to Trumbo long after he died) and MacKinlay Kantor (‘The Best Years of Our Lives’). There isn’t much when it comes to plot though. It’s a familiar tale of star-crossed lovers, flaunting guns and on-the-run from law. But Lewis’ vision had a spectacular gritty tone which tested the limits and taboos of Hays Code Hollywood - the rigorous censorship guidelines enforced until 1968 which was then replaced by MPAA film rating system.

Like every protagonist in film-noir universe, the primary players in Gun Crazy possess an unhealthy obsession. For Bart Tare (John Dall), guns are the thing he’s got to have. As a teenager, Bart (Russ Tamblyn) is caught stealing a revolver from a gun shop window display. In the ensuing court session, we get a glimpse into Bart’s strong fixation for guns. Bart’s sister agrees that stealing the revolver was a deplorable thing. But she assures the judge that her brother would never hurt another person or life with it. Bart’s pals too assert the same, narrating events from past to reminisce the boy’s reluctance to shoot at a live target. Bart is sent to reform school and later does his military duty. Now he’s a lanky young man with a great collection of firearms. Bart shoots at some empty bottles with his boyhood pals – Clyde and Dave – and they go to a gun show at the local carnival. 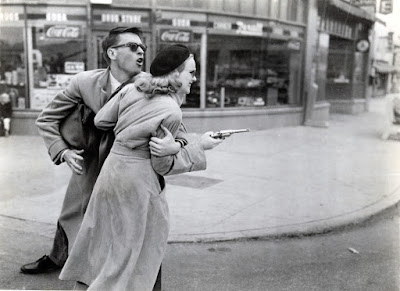 There Bart meets the swaggering and beautiful sharp-shooter, Annie Laurie Starr (Peggy Cummins). The carnival shooting contest between Bart and Annie implies eroticism and a sense of foreplay. Their love and lust for guns and each other makes them hit the road. Of course, they don’t live happily-ever-after. The fiery ‘American dream’ catches up with Annie and she wants a life of ‘action and guts’. Annie slowly persuades Bart to embrace the life of crime in order to make some quick money (the film’s original title was ‘Deadly is the Female’).

Unlike Bart, who is psychologically incapable of harming others, Annie wouldn’t think a minute before shooting her way through obstacles. The sensuous glow in her eyes gets replaced with wild, manic energy when going through dynamic world of violence (“I told you I’m a bad girl, didn’t I?” croons Annie). The couple hold-up banks and soon their infamous legacy catches the attention of every law official across the nation. Eventually, Annie’s hearty calls for action transitions from grand larceny to murder. Nevertheless, Bart couldn’t let go of her and their downward spiral towards damnation is unstoppable.

Gun Crazy must be watched to relish director Lewis’ application of minimal resources to create astoundingly effective set-pieces. Take the bank heist sequence shot in a single take: the camera stays inside the car and the robbery happens off-screen. Yet, Lewis pulls off great tension from the scene. There’s also a sense of spontaneity to the sequence, right from the couple’s worry over finding the perfect parking space to Bart shooting up the tires of the police-cars. I also loved the final swamp scene, whose budget conscious set-up worked more brilliantly than a conventional staging. The pursuers are cloaked in the mist with only chaotic sounds heard in the background. It creates a fine sense of discomfort and through mesmerizing close-up shots of vexed Annie, Lewis strongly spells-out her fate. The misfortune of criminal life is effectively conveyed in the scene, Bart and Annie goes dancing. The lovers’ tight embrace in the dancing floor is suddenly replaced with them running in panic through the dark streets to evade the lawmen. 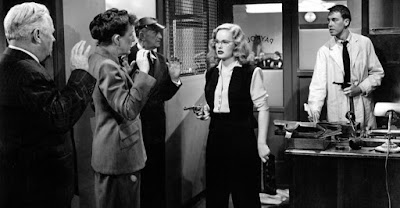 I was thoroughly engrossed by the imagery and the rapid pace, despite the supposed thematic flaws. For all the accusation of misogyny, ultimately bad-ass femme fatale characters of film-noir does have its appeal more than the idealized or prettified women, played by Greer Garson in ‘Mrs. Miniver’, Bette Davis in ‘Dark Victory’, etc. Both the central performances from Dall and Peggy Cummins are riveting and dynamic. Peggy’s Annie is one of the baddest of all film-noir female characters. There’s something animalistic and psychotic in her eyes that adds to the allure of this highly stylized piece of cinema.

Altogether, Gun Crazy (87 minutes) is a bewitching tale of criminal lovers with a stupendous visual flair that takes us on a roller-coaster ride. It’s one of the classic works of film-noir, possessing all its gratifying pulpy sensibilities.

at May 27, 2020
Email ThisBlogThis!Share to TwitterShare to FacebookShare to Pinterest
Labels: Film Noir, Hollywood Movies