When I first started consuming the works of Italian film-maker Paolo Sorrentino, after watching his acclaimed feature The Great Beauty (2013), his 2008 political drama Il Divo was a total anomaly. It's beyond the strangeness sensory overload of richness we usually come across in Sorrentino’s works. I expected a biopic of Giulio Andreotti (1919-2013), a seven-times Prime Minister of Italy, and served 19 times as Minister (in 1991 he was made senator for life). Mr. Andreotti was a leading politician of Italy, who reached pinnacle of his political power in the 1970s when political violence and repressive policies in Italy were also at the peak. 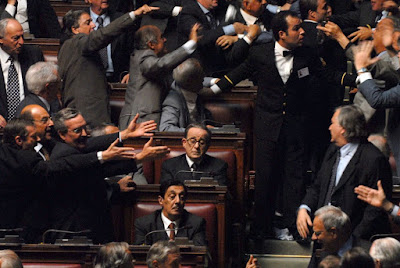 Referred as ‘Beelzebub-the devil’ (among many other unsavory nicknames), Andreotti, the statesman who was the face of Italy for decades, in the mid-1990s was put on trial (in Palermo, Sicily) for his alleged association with mafia and organized crime (resulting in some high-profile assassinations). Although Andreotti was eventually cleared of the charges (partly due to statue-barred limitations), the accusations leveled at him doesn’t seem that far-fetched.

Il Divo (the nickname of Julius Caesar, suggesting “the divine one”) wasn’t certainly a conventional biopic that sought to ‘interpret’ the enigmatic nature of Giulio Andreotti or unveil the hidden truths. Sorrentino, as usual, is at his flashiest, masterfully alternating between frenetic and glacial pace (a mesmerizing visual style that reminds us of Frederico Fellini and David Fincher). But by rejecting a reductive treatment of Andreotti (which would rely upon melodrama), Sorrentino preserves the enigma of his central character, and recruits us viewers to investigate the historical and ethical issues surrounding the miasma of Italian politics. By the movie’s end, we are unsure about whether Andreotti is a perfect symbol of corrupted power or just a misunderstood and persecuted politician, the one who has lived long enough to ‘become the villain’. Il Divo achieves that ambivalence despite presenting a critical study on Andreotti’s sprawling public life. 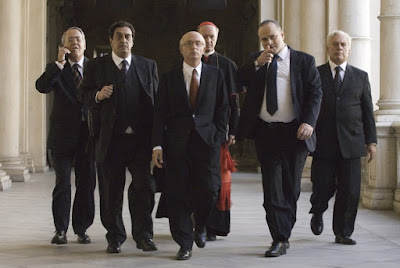 Narrative-wise, Sorrentino takes the Francesco Rosi approach (part of the ‘cinema politico’ trend that emerged in the late 1960s and early 1970s). Similar to Rosi (Salvatore Giuliano, The Mattei Affair), Sorrentino deftly employs Andreotti’s persona to concentrate on the mechanisms of power. Rosi completely rejected the binary contrasts of biopic. He was said to have used familiar historical subjects (of Italy) to wield a ‘film inquest’ rather than ‘glamorizing’ or ‘interpreting’ their lives. Conceptually, Sorrentino brilliantly adopts the Rosi method, eschewing clichéd narrative tactics to establish the subject’s private life (or domestic milieu). However, Sorrentino’s approach differs from Rosi’s in one distinct way, as Sorrentino’s stylistic strategies turns Il Divo into a intriguing dead-pan comedy, unlike Rosi’s unflinchingly somber inquiries.

While I had a very hard time following the narrative of Il Divo the first time, the exploration of Italian political cinema from the 1960s and 1970s (the works of Rosi, Petri, Zurlini, Scola), alongside some reading helped me understand the movie better in the re-watches. Il Divo is so grounded in the Italian political reality that one can wonder about the grind of deeply exploring Italian cinema and history to just understand a single Sorrentino movie. Such quests might seem meaningless, but the utter confusion in watching Il Divo (the 1st time) actually led me to discover some of the hidden gems of political cinema. But even if you aren’t interesting in working hard to understand the nuances of the narrative, Sorrentino’s visual acuity and poker-faced Toni Servillo’s incredibly hypnotizing central performance will mostly keep you engaged. 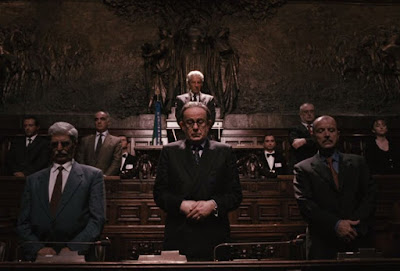 The majority of Il Divo’s narrative is set in the 1990s as Andreotti and his inner-circle of men (known as ‘Andreotti Faction’) in the Christian Democrat Party are linked with corruption scandals, and testimonies connecting the party to the Mafia. The party no longer survives as the disreputability led to its disbandment. In one of the imagined monologues, Sorrentino allows his character to shed his enigmatic mask, and confess that he’s linked with 236 deaths, including the brutal murder of Aldo Moro (in 1978), Andreotti’s political rival, who was kidnapped by the Red Brigades (far-left terrorist organization) and Andreotti shockingly refused to negotiate a ransom. Largely shot inside elegant baroque rooms (by gifted cinematographer Luca Bigazzi), full of expensive and beautiful interiors, Sorrentino captures the alienation and barrenness in his subject’s life.

at May 05, 2020
Email ThisBlogThis!Share to TwitterShare to FacebookShare to Pinterest
Labels: Based on True Story, Italian Cinema, Political Movies