In an unequal society, the powerless find solace in making jokes about the political establishment. But in a nation-state taken over by totalitarianism even jokes can be used to escalate punitive measures against individuals. Jaromil Jires’ 1969 adaptation of Milan Kundera’s first novel The Joke (‘Zert’) showcases how an authoritarian regime’s intolerance of humor crushes an individual and alters his human nature. “Optimism is the opiate of the masses. A healthy atmosphere stinks of stupidity. Long live Trotsky”, writes college student Ludvik Jahn in a postcard to troll his exaggeratedly proper communist girlfriend’s recollection of her experiences at the communal summer school. 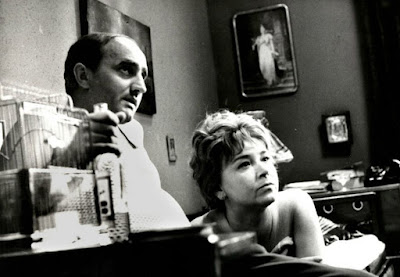 The riposte also sort of reflects Ludvik’s frustration at not being able to bed the girl. The humorless girl forwards the postcard to the local party channels. Taunted by his friends-turned-harshest-critics, Ludvik is promptly expelled from the Communist party and banished to military labor group, where he serves six years in the mines. The middle-aged Ludvik (Josef Somr) now thinks he has stumbled upon a perfect chance to take revenge on his ex-comrade Pavel Zemanek (Ludek Munzar) who has played a vital role in his ostracization.

The control and credibility of the reigning communist apparatus in late the 1950s Czechoslovakia weakened considerably. The film artists rushed to take advantage of this situation. The Czech New Wave came into existence which was mostly quashed alongside the hopes for a liberalized and reformed socialism when Soviet tanks invaded Prague, in August 1968, and brutally reinforced a totalitarian regime. Jaromil Jires belongs to the generation of brilliant and young Czech artists whose non-comformist vision broadened the aesthetic boundaries of intellectual cinema.

Jaromil Jires, like many of the fresh-faced film-makers of the era - Milos Forman, Vera Chytilova, Jan Nemec, Jiri Menzel, Ivan Passer, Evald Scholm, etc - graduated from Film and TV School of the Academy of Performing Arts in Prague (FAMU). Jires obtained director’s and cameraman’s diplomas. After directing various shorts, he made his first feature-film The Cry (‘Kirik’) in 1964. Some critics argue this was first film of the Czechoslovak New Wave, others argue it was Stefan Uher’s 1962 film ‘The Sun In a Net‘). 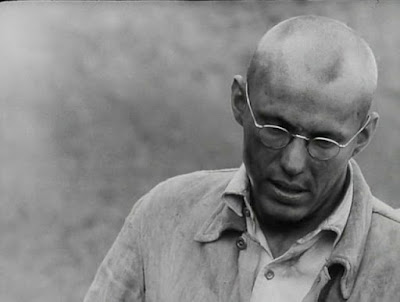 The Cry was near plot-less film which beautifully chronicles fragments of a young couple’s memories. The memories are triggered as a result of the brief separation between husband and wife as she is admitted to the maternity hospital. The Cry isn’t groundbreaking in terms of themes, but a simple romantic drama boosted by a supreme visual style and editing. Following the debut-feature, Jires directed a segment in Pearls of the Deep (1965), an anthology based on various short stories of popular Czech author Bohumil Hrabal.

The Joke (1969) was a more politically committed art from Jires, which although was made during the political liberalization of the 1968 Prague Spring, released at a disruptive time and found itself banned until the collapse of Soviet Union. Jires didn’t leave his country after the repression of the Prague Spring but his libertarian views led to film-making ban. After ‘The Joke’ he immediately made the wonderful surrealist fantasy ‘Valerie and Her Weeks of Wonders’. Jaromil Jires returned to direction at the end of the 1980s.

With The Joke, Jires continued his inventive method of meshing together the present and past. Jires and his editor (Josef Valusiak) depicts Ludvik’s history through frequently intruding flashbacks as if Ludvik’s entire thought process in the present is intricately tied to the troubled past. Similar jarring inter-cut flashbacks were also expertly applied in Karel Kachyna’s 1970 film ‘The Ear’. Ludvik concocts a simple revenge scheme: to seduce Pavel’s wife Helena (Jana Dietova) with whom he has a chance encounter. Ludvik wants to humiliate the man who presided over his trial. Pavel is now a popular professor of Marxism and Helena seems an easy target for Ludvik because she openly declares her frustration and feelings of loneliness. As Ludvik attempts to execute his careful plan, we are often obstructed by the rush of his past memories. 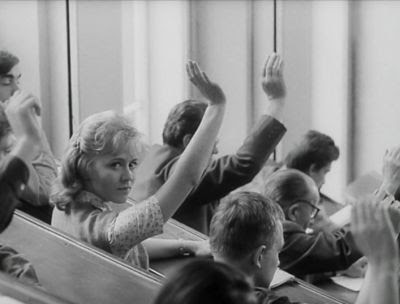 Josef Somr does a great job in turning Ludvik into an unpleasant, oleaginous creature. However, Jires elicits bit of sympathy when we gradually comprehend the truth behind Ludvik’s pariah status and his acrimonious attitude. We don’t see the face of young, college-going Ludvik but the reproaches directed against his young self are neatly juxtaposed with indifferent, bored expressions of the older Ludvik. It feels like as if the middle-aged Ludvik haven’t still escaped from the scowls of those privileged, elite ‘comrades’. Furthermore, the memories of youth and despair of the present ostensibly veers to existential matters.

The marvelous juxtapositions not only addresses how Ludvik is caught in a limbo filled with hate, but also points out the ironies existing within the alleged socialist state. Positive song and music about revolutions are overlapped by scenes of state-sanctioned cruelties in army labor camps. Jires’ finely balanced perception also sees gentle folk music getting drowned by the rock music, played in transistors by the drunk teenagers of post-revolution generation. Eventually, the narrative’s heaviest irony comes from Ludvik’s endeavor to use sex as a weapon. The meeting with Pavel offers Ludvik nothing but more bitterness. The Stalinist has updated himself with ‘bourgeois’ ways and free-love, but the unjustly punished individual is suffocating under fantasies of vengeance and venting his rage in the wrongest manner possible.

Overall, The Joke (80 minutes) presents the astute vision of an individual in a totalitarian society, overwhelmed by tide of displeasing memories and repressed feelings.

at May 12, 2020
Email ThisBlogThis!Share to TwitterShare to FacebookShare to Pinterest
Labels: Czechoslovak New Wave, Political Movies