Hiroshi Shimizu’s Ornamental Hairpin (‘Kanzashi’, 1941) along with the director’s other two talkies – Mr. Thank You (‘Arigato-san’, 1936) & The Masseurs and a Woman (‘Anma to onna’, 1938) – were conceived as group portraits set among a distinct backdrop that temporarily brings together vacationers or travelers. While Mr. Thank You unfolds inside a small, rickety bus as a cross section of rural Japanese people travel through picturesque mountain roads, The Masseurs and a Woman & Ornamental Hairpin is set in the backdrop of a remote, hill-side hot spring resort. 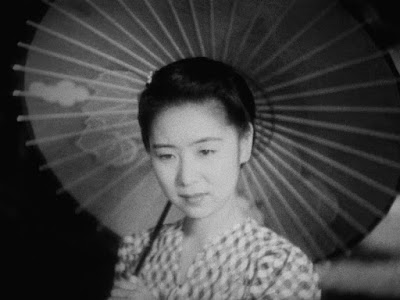 The unique characters in the three films represent a microcosm of Japanese society; in an era when the nation slowly recovered from economic depression, only to be beset by the total mobilization for war. The singularity of Shimizu’s men and women are sharply delineated by the ‘Senses of Cinema’ article (Hiroshi Shimizu: A Hero of his Time’) by Alexander Jacoby: “His characters are almost always those who are alienated from the mainstream of society, whether by personal situation (poverty, family breakdown), profession (his men are often artists; his women, hostesses or prostitutes), or geography (most of his films are set in outlying areas of Japan, particularly the mountainous and inaccessible Izu Peninsula).”

Based on a story by Masuji Ibuse, Ornamental Hairpin opens with the shot of group of geishas walking through mountain road flanked on both sides by humongous trees. Among the women in the group, Emi (Kinuyo Tanaka) and her friend Okiku (Hiroko Kawasaki) are jubilant about their brief visit from Tokyo. The geishas’ arrival engulfs the inn with festive mood, the women booking all the masseurs available. The noisy gathering, however, irks the grumpy professor Katae (Tatsuo Saito) whose vociferous complaints go unheard.

Other guests at the inn include: an old man and his two lively grandsons, Jiro and Taro; the meek Mr. Hiroyasu (Shinichi Himori) and his wife (Hideko Mimura); and Nanamura (Chushu Ryu) a soldier on leave. The geishas depart the inn after few days, but Emi leaves behind her ornamental hairpin in the hotspring which injures Nanamura’s foot rather badly. Nanamura isn’t bothered by his injury and finds the whole thing poetic: just like a poem pierces the soul, this 'poem' has pierced a sole. 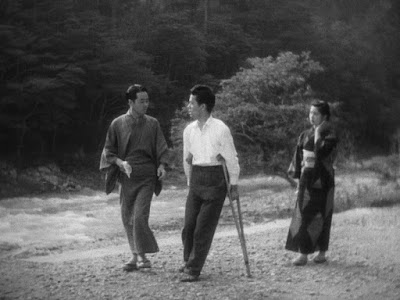 The professor initially frowns at the soldier’s poetic inclinations. But he starts to speculate on the (and other guests too) beauty of the haripin owner, further adding to Nanamura’s romantic take on the accident.  Meanwhile, Emi sends a letter to the resort owner offering to pay for the return postage if anyone finds the hairpin.  And when she hears about Nanamura’s predicament, Emi arrives in person to apologize. Of course, Emi is young and beautiful, and a quite affection grows between her and Nanamura.

Rejecting her wealth and materials of her former life in Tokyo, Emi stays in the inn and watches him gradually rehabilitate. The two mischievous boys (Jiro and Taro) accompany Emi and Nanamura, shouting cheerful words as the wounded soldier tries to walk without the help of crutch. Nevertheless, Ornamental Hairpin isn’t a straightforward love story. The 'love' is rather suggested through meaningful yet quiet glances and represented through the walk that first take place between trees and later over a rickety bridge, and mesmerizing hillside stairs.

The narrative is mostly episodic in structure, each hinting at how the tranquil atmosphere shelters this group of disparate people from the hard realities of outside world. Shimizu subtly hints at the guests’ class status - they all are sharing rooms on cheap rates and hence the refrain from commenting on the sameness of served rationed food - and Emi’s troubled past. The professor’s pompous nature comes down a notch as he socializes with others and assumes the role of the head of this make-shift family. The community of inn guests, of course, disintegrates when the holidays reach its end. The film ends on a melancholic note with kimono-clad Emi repeating the walks - among the trees, in the bridge and hillside stairs - without her would-be lover, and in that moment we can also discern the misery and uncertainties the wartime affairs is going to bring upon all the characters we had just traveled with. 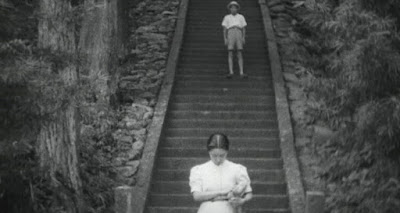 Like most of Shimizu’s works, Ornamental Hairpin first appears to be a conventional gentle comedy, but slowly reveals its deeper layers as the film-maker manages to evoke nuanced, unspoken emotions of love and friendship. Often compared with the works of French master Jean Renoir, Shimizu’s films too remains as a mixture of charming simplicity and emotional complexity. The most striking aspect of Shimizu’s direction is his penchant for tracking shots that not only follows characters, but also cuts diagonally across to give us a feeling of the landspace and spaces. Some of the director’s formally beautiful shots withhold great emotional power.

For instance, the scene Nanamura climbs up the hillside stairs leading up to a forest temple. His ascent presages the end of the transition period (Emi turns away in tears), whereas the calm and safety of the moment remains frozen in those frames. While Mr. Thank You’s narrative arc was infused with notes of hope and redemption, Shimizu in Ornamental Hairpin in order to reflect the uncertainty and hardships of the times (wartime Japan) rightly leaves the tender connection between Emi and Nanamura unresolved.