Half Nelson refers to a wrestling hold in which a wrestler’s arm is passed under his opponent’s armpit and the hand is holding the back of the opponent’s neck; an uncomfortable position in which the opponent feels locked. Ryan Fleck’s indie feature, Half Nelson (2006) expresses its teacher protagonist’s feeling of being caught in a disquieting life situation; a wrestling hold turned into a subtle metaphor in this low-key emotional narrative. Similar to Blackboard Jungle (1955), Stand and Deliver (1988), Dangerous Minds (1995), and Freedom Writers (2007), Half Nelson also features a tough American inner-city school with a teacher hailing from the liberal background (with the exception of Edward James Olmos in Stand and Deliver, all the other protagonists in the aforementioned movies are white).

Moreover, the core narrative of Half Nelson follows the tentative friendship between the young, charismatic history teacher and his African-American teenage girl pupil. Nevertheless, this is not a movie of big statements and cheap melodrama. In fact, Ryan Fleck and his co-writer Anna Boden crafts this as a wonderful examination of broken people, where the teacher is neither ideal nor says something like ‘Carpe diem’. 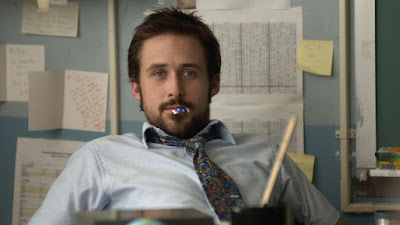 “The only constant is change”, declares Dan Dunne (Ryan Gosling), an instantly likable history teacher (with a great interest in dialectics) working at inner-city middle school in Brooklyn. He also says, during one of his classes, “Everything is made with opposing force. We may be opposed to the machine, but we're still very much a part of it, right? I work for the government, the school, but I'm also very much opposed to a lot of its policies. You guys hate coming to school, right? Holler back if you heard me! You hate it, but you come anyway.” I think these two statements perfectly alludes to the core themes of Half Nelson, especially the characters’ inner conflict as they feel the pull between two opposing forces or despair over the change.

Right from the beginning, we can see how brilliantly Dan engages his students, making them care about what he says. Thirteen-year-old Drey (Shareeka Epps) admires and respects him like all her classmates. He’s also her basketball coach, making us think that this guy is not just good with intellectual discourse. The first crack in this handsome, talented young teacher image is inflicted when we see him lead a lonely life (a cute cat is the only companion at home), chasing girls at a bar and buying crack cocaine from a street dealer. Later, he is caught snorting coke at the gym bathroom by Drey. Interestingly, Drey doesn’t judge Dan; maybe because she’s already acquainted with the drug-addled society, or she cares too much about Dan to question him about it. It’s a bit of both. 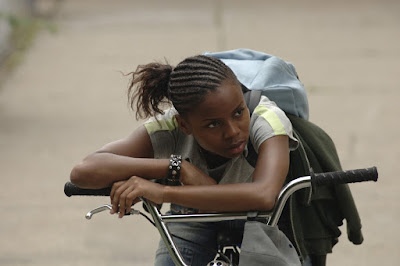 Drey’s parents are separated. Her father doesn’t show up (in her life and in the movie). Her mother is a regular beat cop working round-the-clock. Drey’s elder brother is in jail, taking the fall for a friend and local drug-dealing kingpin, Frank (Anthony Mackie). Frank looks out for Drey. It’s ambiguous whether Frank is just recruiting her for his line of job or looking out for her simply out of brotherly love (maybe, it’s a bit of both). While Dan and Drey gradually develops a bond - for Drey a better father-figure than Frank - their friendship is pulled by opposing forces.

Dan’s life begins to unravel since he is unable to kick his drug habit. His ex-girlfriend meets him to say that she’s rehabilitated and going to get married. Dan sleeps with a female colleague, which later only leads to a cringe-worthy situation. On the other hand, Drey is slowly drawn to Frank’s world, delivering drug on his behalf, and speaking in his lingo. But despite the opposing forces pulling them and the eventual change, the film ends with Dan and Drey retaining their meaningful redemption, and their shy smile hints at the possibility of positive change.

Half Nelson is a remarkable effort by first-time feature-film screenwriters, Ryan Fleck and Anna Borden (after making couple of indie features, they recently helmed a big studio project -- Captain Marvel). With this original script (Boden also served as the film’s editor) the duo does a fine job in intertwining their pet themes while also taking great care to subtly zero-in on the emotions. Fleck and Borden largely avoids the conventions of the genre, particularly when it comes to realizing Dan and Drey’s bond. The nuanced performances and the honesty with which the actors express themselves of course is also the reason for the way the film-maker transcends the plot’s ordinariness. 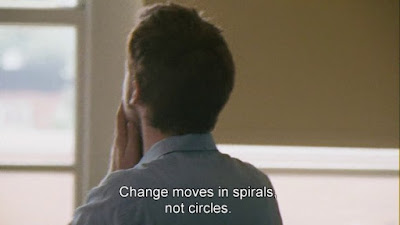 Yet the writing interests me for the manner it gradually accumulates emotions and thematic ideas, and the drama doesn’t look to make a big impact but passes off like a gentle breeze. The reason behind Dan’s drug addiction or why his life is wreck isn’t clearly stated. But we know he is the disillusioned child of bourgeois parents who probably were hippies (“You stopped the war”, Dan says to his mom). Furthermore, his pursuit of dialectics, the weighty books he studies, and his messed up relationships does tell a lot about his personality. However, it’s also understandable why such nuanced and ambivalent treatment may make Half Nelson a disappointing movie experience for some. From the shaky, fly-on-the-wall visual style that induces nausea to the tad tactless, abrupt ending, the film does has its share of flaws.

Eventually Half Nelson is worth watching for the two mesmerizing central performances. It’s hard to define the way Gosling and Epps command the emotional terrain of the narrative through mere words. Gosling is especially great in the scene when his character decides to confront Frank, asking him to stay out of Drey’s life. Dan tries to make his point, but anxiety and vulnerability takes over and he ends up taking Frank’s offer for a drink. It’s one of my favorite scenes in the movie, where Dan’s frail state is conveyed with a light note of humor (that moment he picks up the stray cat is laced with sadness and humor). Epps, a non-professional actor, incorporates a rawness to the character, and is perfectly up to the task in playing against Gosling. The different shades of emotions rendered by both the actors are clearly as fascinating as the film’s dramatic core.

Overall, Half Nelson (106 minutes) is an indie gem that takes an overwrought story-line involving charming teacher and troubled student to turn in a narrative full of honest emotions and rich themes.