Film movements and newly flourishing film culture have often helped movie enthusiasts to re-evaluate or re-discover particular style of films. This was particularly true of film noir (of the 40s) which although had been revered for decades by the French critics (they also coined the term). The video culture and the film criticism of the 1970s boosted few forgotten tiles of film noir, some eventually raised to ‘masterpiece’ status - the truth blended with mythos helped certain movies’ popularity. Edgar G. Ulmer’s Detour (1945) was one such movie to have been re-discovered and went on to occupy an honored place in the history of film noir. It just about appears on every film noir connoisseurs’ list of classics of the genre.

Edgar Ulmer was one of the expatriate film-makers - born in Austria - who came to Hollywood after the rise of Third Reich. Ulmer associated himself with film industry by working as set designer. He has worked in the notable silent films of the era, including “Der Golem” (1920), Fritz Lang’s “Metropolis” (1927) and “Die Nibelungen” (1924). At Hollywood, he directed the Universal horror classic, Black Cat (1934), starring Bela Lugosi and Boris Karloff. However, Ulmer’s directorial career didn’t flourish much under the studio domination. He was content with doing small-budget films and Ulmer’s visual styles very often belied the paltry budget. The knowledge of Detour’s low-end production is very well known among noir aficionados: it was shot over 28-days, although it was rumored to have been only shot in six days. Yet Ulmer easily transcends ramshackle production into a highly professional piece of work. He also perfectly puts to use the grimly fascinating and focused script (by Martin Goldsmith) that instantly grabs our attention. 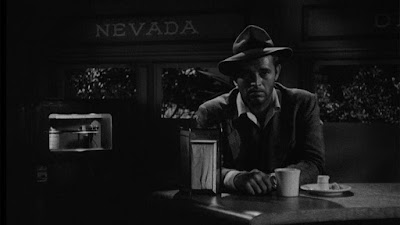 Detour offers textbook illustration of film noir narrative and imagery: voice-over narration, broken men, dangerous women, smart use of montages, unusual camera angles (oh that coffee cup!!), and effective use of lighting, especially that slot of light to denote the protagonist’s emotional torment. The narrative largely unfolds as a flashback. The disheveled and tempestuous central character, Al Roberts (Tom Neal) sits in a shabby diner and thinks back on the nightmarish events from the past few days of his life. Al is a New York pianist who is deeply in love with his singer girlfriend, Sue (Claudia Drake). The girl, however, has decided to move to Los Angeles to try for better prospects in the showbiz. But Sue only lands up in a waitress gig. To support his agonized lover, Al decides to hitch a ride to Los Angeles and get married.

Al feels lucky to have come across a guy named Charles Haskell Jr. (Edmund MacDonald), who agrees to take him, all the way to L.A. since that was his destination too. The guy even buys Al a meal. Charles is a burly guy who likes to chat. He tells the story behind the scratches in his hand (courtesy of a crazed female hitchhiker), about his horse-betting profession, and finally the reasons for making this trip. Al takes the wheel for few hours and allows Charles to sleep. Soon, Haskell croaks (the reason remains baffling) and Al, in a state of panic, hides the corpse behind a bush and borrows the guy’s money, car, his suit, and his identity. Al’s bad luck only turns worse when he makes the mistake of picking up a hitchhiker himself. The hitcher is a mean, sharp-tongued woman named Vera (Ann Savage) who knows Al is lying, because she was that 'crazed female' who gave Charles Haskell Jr. his scars. After extraditing the truth from Al, Vera sticks on to him like a parasite and chooses to use him or rather Al’s new identity to receive loads of money. 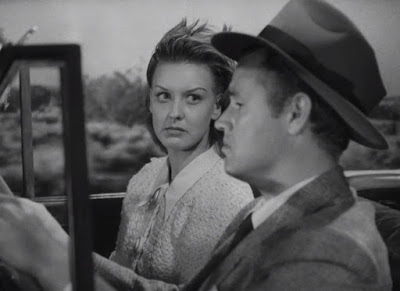 Like a typical noir, Detour dabbles with bleak fatalism, tracing the downfall of an ordinary, flawed yet conscience-striken man who gets drawn into web of crime due to odd twists of fate. Ulmer stages the narrative with an urgency and strong sense of inevitability, depicting how Al’s desperate actions to avoid disaster only secures his doom. The cynicism and bitterness - staple elements of film noir - is clearly evident in Detour’s quest for happiness-gone-wrong narrative. In many ways, the film is seen to be providing a counterpoint to the usual perception of Hollywood & Los Angeles as a dream factory.

The woman who talks of making it big gets (literally) strangulated. The man with dreams of bonding back with his love gets increasingly haunted by nightmarish scenarios. The cross-country journey may be mostly filmed on a process stage. But the limited production values help to establish the surroundings as wastelands, which shatters one’s dreams, doing the opposite of what the typical American cross-country trips tend to achieve. Ulmer excels in keeping intact the grimy, sooty atmosphere throughout, be it the set design of darkly-lit diners or the suffocation-inducing motel rooms. 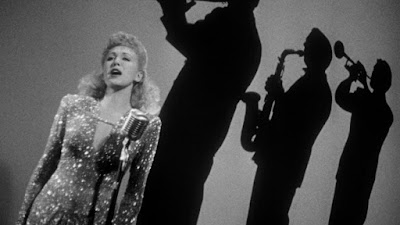 Detour also greatly benefits from the central pair’s unerring performances. Neal is pretty good at expressing the looks of sullen resignation while facing every disapproval and indignity inflicted upon his character. The memorable shot of small slot of light on Neal’s face perfectly conveys the countenance of a person who only expects the worst from life. Savage lives up to her name, her Vera occupying the hall of fame of femme fatales alongside Barbara Stanwyck, Rita Hayworth, Joan Bennett, etc (though Ann Savage never made the jump to A-list stardom like the other female actors mentioned here). Vera is absolutely feral, irredeemable, and intolerable, Savage’s fire-breathing performance was truly entertaining. Interestingly, Savage’s Vera was not bluntly sexualized, unlike the femme fatale roles of the era.

Though technically a bit rough, Detour (68 minutes)  doesn’t have any flaws (perhaps the strictly enforced Hays Code moral ending was the only annoying aspect) and it offers a remarkable distillation of film noir’s essential themes and images.