Sadao Yamanaka’s Humanity and Paper Balloons (1937) ends with a poetic imagery of a hand-made paper balloon landing in a gutter, set adrift by the light breeze. This metaphorical representation of the fragility of human existence plus the dismal events which leads up to that moment hits us with the feeling of pensive sadness, but not just because of the film’s melancholic qualities. The sense of loss is also derived from factors unrelated to the narrative, such as the talented 28-year-old Japanese film-maker’s untimely death on the battlefront in Manchuria (17th April, 1938). Sadao Yamanaka supposedly made twenty-six films in his short directorial career. More than half of the films he made between 1932 and 1937 are silent cinema - most belonging to ‘Jidaigeki’ genre - and only three films survive from the director’s oeuvre: Tange Sazen and the Pot worth a Million Ryo, Priest of Darkness, and Humanity and Paper Balloons. Nevertheless, these three projects stand as a testament to his skillful use of the cinematic medium. 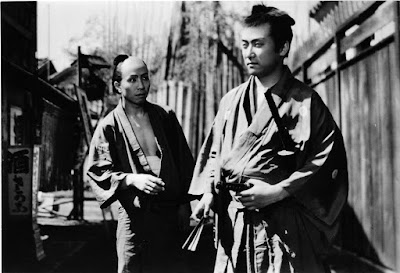 Bolstered by a complex, layered script from Shintaro Mimura (based on a kabuki play), Sadao Yamanaka’s swan song is set in the Tokugawa era (probably the 18th century). The story closely focuses on the people of lower classes, dwelling in the slums of Edo (now Tokyo), often beset by the fierce feudal class values. The narrative clearly illustrates the infrangible relationship between the ruling class and the mercantile class whose efforts to maximize their wealth and power largely goes undisputed. And the samurai classes who aid their masters in maintaining the status quo are far different from the ‘noble warriors’ portrayed in the chanbara classics. Setting aside the bushido code evoked in samurai cinema, Yamanaka and Mimura shows these swordsmen as unscrupulous thugs who are only capable of lording over impoverished peasants and workers. The lower classes are cynical and opportunistic in nature, not yielding themselves to the notion of ‘nobility in poverty’. But they are relatively honest bunch as we find the authoritative air in the upper rungs of social ladder more stifling.

Humanity and Paper Balloons opens with a shot of downpour, battering the cramped street of Edo slum. The rain clears up next day and the denizens set about to earn their meager wages when they hear the news of the suicide of a samurai neighbor. The death of neighbor is discussed in a darkly humorous manner- why he didn’t hang himself in a rainy day and why didn’t he commit hara-kiri - which also allows Yamanaka to introduces different types of people in the community: a crafty blind masseur named Ichi (not to be confused with expert blind swordsman hero 'Zatoichi'), a freewheeling gold-fish seller; the landlord; a defiant barber named Shinza (Kanemon Nakamura); the poor ronin, Matajuro Unno (Chojuro Kawarasaki) and his good-natured wife, Otaki (Shizue Yamagishi). The barber and ronin are the central characters who are repeatedly humiliated by the clan’s powerful. Apart from being the local barber, Shinza sets up surreptitious gambling games. This catches the attention of Yatagoro gang who has monopolized illegal gambling. 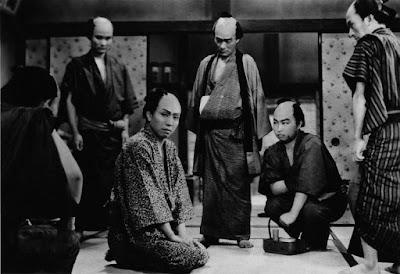 Before Shinza’s conflict with Yatagoro henchmen, the character’s persuasive nature is established as he requests the landlord to organize a wake, in memory of the dead samurai. He persuades the landlord to buy few sake bottles, and the wake soon turns into a riotous party for the slum dwellers. "Party or wake, it’s all the same in the end", quips an inebriated man. The narrative also ends with a drunken revelry although the tragedy that follows it is more devastating. After the wake, Shinza is abducted by the yakuza gang and warned by Yatagoro to stop his furtive gaming sessions. Shinza yields to the gang, but the same night he arranges for the game, which is duly stormed by Yatagoro men, making Shinza to flee from the scene. The other main character, Matajuro Unno, a downcast masterless samurai, desperately tries to get the attention of local clan leader Mori (Kosaburo Tachibana), who was a former associate of his late father. Mori keeps avoiding Unno and even humiliates him by sending up Yatagoro’s thugs after him. 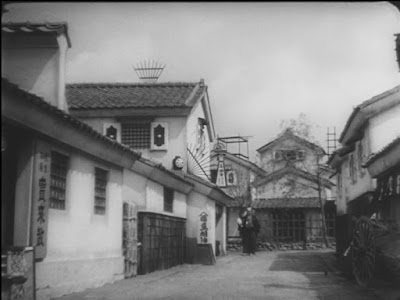 At home, Unno assures his wife that Mr. Mori will offer him a job. Unno’s wife, Otaki spends her day cooped up in the shack, making paper balloons to support the family. While Yatagoro serves as adverse figure in Shinza’s life whereas Mori in Unno’s life, the two men are equally mortified by the Shirakoya Pawnbroker shop. The rich shopkeeper’s young daughter, Okoma (Takako Misaki) is to be married to an aristocratic family in order to strengthen the bonds between merchant and noble class. Okoma, however, harbors a love for Chushichi (Kikunojo Segawa), a dashing yet cowardly young man working for the pawnbroker. Shinza gets fed up by the authority persecuting him and decides to commit an act of rebellion by kidnapping Okoma. Unno doesn’t actively participate in the kidnapping, but he aids Shinza in a crucial way. Nevertheless, as one can easily discern Shinza can’t escape after demeaning the powerful. The film ends with painful images of glinting knives set against dismal weather.

Humanity and Paper Balloons is stripped off the romanticized notions associated with Edo period and image of the samurai. There are no conventional heroes here as the greed, alcoholism, and thuggery rampant in the narrative speak of decline in virtues and values. Both Shinza and Matajuro Unno aren’t conventional heroes. Although Unno seeks employment as a samurai, he is a weakling and not much of a fighter. The spark of defiance withheld by Shinza almost turns him into a heroic figure, but he is a bit flexible with his values. Moreover, mastery of tongue wouldn’t aid him to overpower the swordsmen. While director Yamanaka’s treatment of lower classes is unglamorous yet empathetic, he reserves his bitter critique for the privileged classes, whose composed posture seems to masquerade their unbridled self-interest and greed.

Yamanaka symbolizes the hopeless situation of the marginalized through gloomy weather, often punctuated by heavy rain. He repeatedly trains his camera on the muddy, rain soaked alleyways, teeming with the city’s poor populace to emphasize on the stress and despair caused by the congested space. The subtle characterizations by writer Mimura also perfectly compliments the film-maker’s carefully staged scenes. Yamanaka is alleged to be fan of American cinema and hence the witty banter of Shinza is said to be meticulously tailored by him. 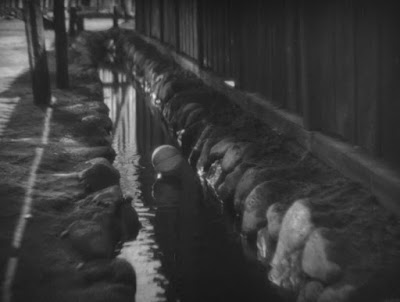 Historical dramas can be used as a tool to reflect the bleak social and political conditions of the present. In this vein, Sadao Yamanaka and Mimura’s downbeat vision subtly relates the tyranny of feudal Japan with the corruption of values within the political hierarchy of pre-war Japan, which was then afflicted by the increasing jingoistic and militaristic fervor. Overall, Humanity and Paper Balloons (86 minutes) is one of the overlooked gems of Japanese cinema that fascinatingly exposes the hypocrisy and cruelty of the high society and observes the struggles of disenfranchised poor with poetic pathos.