Nobuhiro Yamashita’s charming, nostalgia-tinged offbeat dramas have a calming effect on me. His deadpan minimalism, the simple narrative largely free of manipulations, the relaxed mid to long shots, and the matter-of-factness in evoking the sense of time and place adds up to the enduring appeal of Yamashita’s works. His movies may not have the narrative economy and artistic precision of the greatest practitioners of such aforementioned tones, for e.g., Aki Kaurismaki, Takeshi Kitano or Jim Jarmusch. But Yamashita often brings his own refreshing idiosyncrasies and painstaking observations to turn a rather conventional story into a resonant drama.
While his first three films – Hazy Life, No One’s Ark, and Ramblers – featured slacker youth with not much of a plot, Yamashita’s later works explored the awkward teenage years built around a storyline of sorts.  Yamashita’s fourth directorial effort Linda Linda Linda (2005) was definitely his breakthrough film earning the commercial success that remained out of his reach. Recruited as a director-for-hire, Yamashita furnishes both the momentous and mundane events with an understated beauty. The script written by Kosuke Mukai & Wakako Miyashita won an award in the screenwriting competition which was brought to the director’s attention by producer Hiroyuki Negishi. Yamashita has reportedly made quite a few changes to the script. 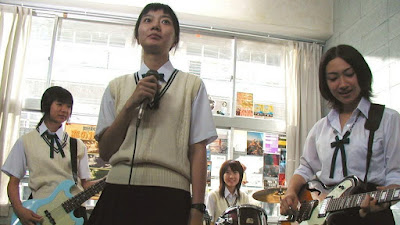 Though the high school setting and all-female band reminded me of Shinobu Yaguchi’s highly entertaining Swing Girls (2004), Linda Linda Linda dodges the familiar beats of teens-preparing-for-talent-show narrative. While Swing Girls is riddled with belly-laugh inducing vignettes and a thunderous final musical performance, Yamashita’s movie isn't strictly preoccupied in moving towards the destination. We know the narrative is just about all-girls punk-rock quartet preparing for a high school talent show. And of course it culminates with an obligatory yet an intoxicating musical number. However, Yamashita almost displaces such limiting qualities of the familiar narrative with nuanced humor and tranquilizing framing devices – the stoic as well as playful countenance of its central four characters are often gracefully set against silent space.

Teen dramas effortlessly zeroing-in on expressions of bewilderment and awkwardness or documenting their simplest yet stressful trials of life, of course, is nothing new. But Yamashita does it in a shrewd, idiosyncratic manner. Moreover, he foregrounds the characters’ desire and quiet humility in a way that really transcends the constraints of the narrative. The girls in Linda Linda Linda and even the characters in the periphery might come across as sweet and innocent, and the only tense stand-off in the narrative isn’t elaborated. Yet there are quite a few suggestions of excruciating things going on behind the scenes which Yamashita leaves it up to the viewers to fill in the details (most particularly the meaning of a dream sequence). 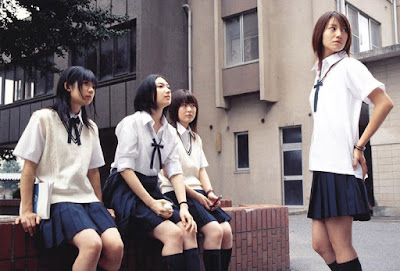 The movie opens with drummer Kyoko (Aki Maeda) and bassist Nozomi (Shiori Sekine) alluding to an argument between key members of their band: keyboard player, Kei (Yu Kashii) and lead vocal Rinko (Takayo Mimura). The rift between these best high-school friends is whispered across the school corridors. It is said to have happened over replacing their injured lead guitarist, Moe Imamura (Shione Yukawa). Whatever the reasons, the band’s chance to perform at the school’s annual talent-show, which is just few days away, remains tentative. Kei raises up to the occasion and takes over the lead guitarist duties, whereas Nozomi stumbles on to a box of old cassettes and they decide to perform the 80’s hit ‘Linda Linda Linda’ by the Japanese punk-rock band The Blue Hearts.

When Rinko teasingly questions Kei about their lead vocal, she just a picks a girl walking through the school courtyard which happens to be Son (Doona Bae), a Korean exchange student with limited vocabulary of Japanese and clearly has no singing experience. Oh yes, we can easily visualize how it’s all gonna end. Nevertheless, the coming together of these four different individuals as they spend day and night in the school’s cloistered music room plus the gradual development of friendship between Son and the three girls are emphasized with a gentle humor and unforgettable tenderness. Though the Korean actor Doona Bae was in her mid-20s when she played this character, her lean frame and sleepy eyes allow her to effectively integrate the adolescent clumsiness. She is definitely the scene-stealer of the four and most importantly the narrative doesn’t make jokes over her ‘foreigner’ status. 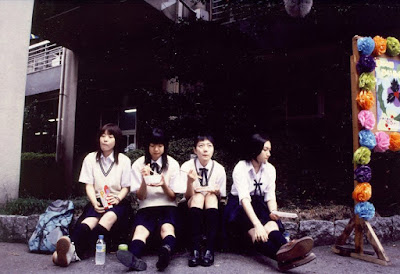 Being such a mature performer Doona Bae brings a graceful note to Son’s misunderstandings and mistakes so that we only laugh with the character, and never on her. It was absolutely hilarious to watch Son negotiating her way into the karaoke club with buying any drinks. Yu Kashii, who plays Kei, is equally good. Her stoic face and vacant stares subtly expresses the pains of growing up, especially Kei’s increasing estrangement from close friend Rinko. Furthermore, the interaction between the four girls though offers nothing revelatory, the mingling of each of their individual temperament is a joy to behold.

Eventually, the traces of superficiality in the narrative are wiped off in Yamashita’s lengthy, brooding unbroken shots. Be it the girls walking in line carrying their musical instruments or Son and Kei expressing their freshly forged bond in their own respective languages in the washroom mirror or the moment when Son walks to the stage, the day before the show, with a mix of fear, zeal, and delight, Yamashita and his flawless actors pushes us to live in the moment alongside the characters. There are eventful teen dramas that might come across as sluggish, and there’s Yamashita’s film which underlines the resplendence of simple warm-hearted human interactions – the style the director has followed in his subsequent subtle dramadies, A Gentle Breeze in the Village (2007), The Drudgery Train (2012), and Over the Fence (2016).