Pitfall (‘Otoshiana’, 1962) marks the first of the four intriguing collaborations between director Hiroshi Teshigahara, novelist and playwright Kobo Abe (who adapted his own novels), and the renowned composer Toru Takemitsu. Kobo Abe’s profound existential stories overcame the difficulties faced by literary works that tries to don the film-form, thanks largely to Mr. Teshigahara’s magnificent ability to envision unique aesthetics for Abe’s metaphorical and emotional expressions, combined with Mr. Takemitsu’s dissonant and uncomfortable musical score. Although the partnership gained global acknowledgment only with the release of Woman in the Dunes (1964) and The Face of Another (1966), which became part of a ‘new wave’ in Japanese cinema, Pitfall contains all the visually daring elements and pointed social critique that were further elaborately addressed in those subsequent acclaimed works. The film starts as a social realist tale of a poor miner, but then employs elements of surrealism and absurdism to deliver an arresting allegory on the corrupted authority of post-war Japan. In fact, the director himself calls his unique aesthetic style as ‘documentary/fantasy’. 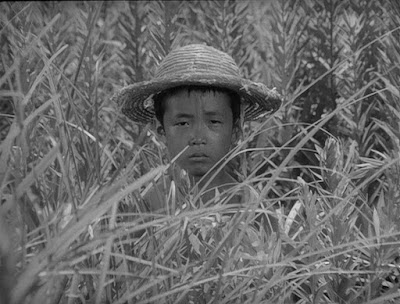 Pitfall opens at nighttime with a man (Hisashi Igawa), his little son (Kazuo Miyahara), and the man’s friend (Kanichi Omiya) escaping from a ramshackle camp-town. They address themselves as deserters and fear bounty hunters might be after them. As if confirming their fears, the boy sees a man dressed in white suit (Kunie Tanaka) observing them from a distance. The men, however, aren’t prisoners but just exploited miners, dreading the punishment of mining establishment. The miners do some odd jobs and are always on the move. In one mining town, the miner is advised to visit a nearby village for a job. With the help of a map, the miner and his son walk to the village, which they find to be deserted, except for a female shopkeeper living there. She sells candies and waits for the letter from her lover.

The miner realizes this was an abandoned mining camp, and wonders why he was asked to visit the place. Before long, the man in white suit follows the miner and starts stabbing him with a knife. The miner dies. The son come across his father’s corpse and reacts with an unfathomable indifference. Meanwhile, the man in the white suit approaches the shopkeeper to bestow her with cash, and to say to the police that the killer looked like a miner with a bald spot above his right ear. 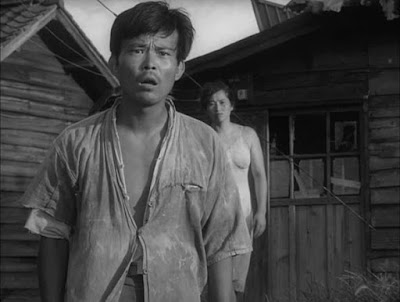 Amongst all these mysterious happenings, the miner himself arises; but only as a ghost, forever doomed to haunt the ghost town. Invisible to the living, the miner’s ghost witnesses the unfolding investigation with great frustration. The testimony of the shopkeeper misleads the investigation and throws suspicion on two rival union officials of a mining company. The mystery deepens and the threat of violence persists, although Teshigahara and Abe use the twists and bloodletting to reflect on existential concerns.

Woman in the Dunes was best known for director Teshigahara and cinematographer Hiroshi Segawa’s unique imagery of juxtaposing the landscape of shifting sand with the body and it’s self; such that in some of the fantastic shot compositions the naked body’s creases and folds resemble that of the dunes. The existential questions and themes of identity Abe deals in the novel finds a firm anchor in this particular form of visual representation that explores the relation between body, self, and the landscape (which naturally addresses the cultural and social concerns).

In Pitfall, Segawa and Teshigahara seem to have first attempted those visual ideas (setting precedence) that worked more perfectly in Woman in the Dunes, supported by the novel’s stronger metaphorical structure. Since Pitfall’s story is a bit uneven compared to the other two heralded adaptations of Abe’s novels, the hypnotic black-and-white imagery easily overpowers the genre-splicing storytelling. 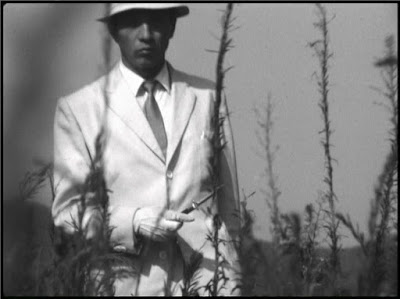 Unlike Woman in the Dunes, Pitfall fails a bit to strike the right balance between allegorical and psychological/emotional concerns. Hence the film works a lot on metaphorical level by theorizing on what the man in white suit represents or what the boy’s apathetic stance represent and so on. But except for the sad predicament of shopkeeper and the miner (which in itself is mixed with elements of absurdism), there’s not much emotional investment in the narrative. Nevertheless, there’s lot of arresting visuals here to lose ourselves and ponder over the abstract questions of existentialism.

The visual motif of voyeurism recurs throughout the narrative: for instance, the extreme close-up of the shopkeeper’s sweaty body and the iconic shot of a boy peeking through a knothole. Another recurrent visual idea is nature’s indifference to human endeavors. While human actions advance towards a predestined fate that’s supposed to have some meaning, the nature is portrayed as an ominous presence devoid of meaning. I couldn’t clearly understand the meaning of the boy’s presence. He could represent the viewers’ distanced perspective, a voyeur like us witnessing the events with morbid curiosity.

Similar to Abe’s other works, Pitfall emphasizes both on the universal existential themes as well as on the Japanese sociopolitical and sociocultural realities of the time. Earlier, in the film Teshigahara infuses news clips and footage of real mining accidents to paint a grisly picture of the occupation. This along with the miner articulating his dream to work in a unionized, regulated mining industry addresses the increasing western corporate imperialism in Japanese industries, although officially those years were considered as the boom period in post-war industrial Japan.

Therefore, the film clearly deals with the pitfalls of rivalry and violence conceived by the new capitalistic system of Japan to perpetually keep the workers in conflict. At the same time, incapacitated spectral forms of the miner and shopkeeper represent the universal themes of ill-treatment of working class and the ruthlessness of hidden power (the three violent deaths of workers near the marshland also talks of an existential deadlock created by the authority). Finally, Toru Takemitsu’s creepily effective soundtrack merges well with Teshigahara’s experimentation with form and tone.