John Farrow’s The Big Clock (1948) is the movie equivalent of a delightfully tense page-turner. Based on Kenneth Fearing’s novel and adapted by Jonathan Latimer, it’s one of the minor classic of film-noir (although it crosses into light-hearted comedy territory now and then). The movie opens with the camera panned over the city’s dark skyline, few windows basking under lights. The camera slowly zooms in on the Janoth Building, entering one of its lower floors’ unlighted windows and captures a man moving in the shadows of the labyrinthine building. The man is George Stroud (Ray Milland), wearing an expensive buisiness suit but his face shows unrest and mortal fear.

He enters into the most complex structure within the building: a gigantic mechanical clock whose inner bowels are decorated with spiraling iron stairs, dials, gauges, and a control board. Through the window slats of clock tower, the man frustratingly looks at the guards prowling on the corridors and begins to address viewers, like every cornered film-noir hero: “How did I get into this rat race anyway? Just thirty-six hours ago I was down there, crossing that lobby on my way to work. A guy with a good job, a wife, and a kid. A respected member of the community.” Yes indeed, how did George Stroud get into this position? 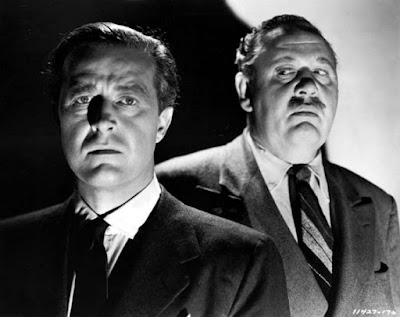 In the flashback, George is a lively, gregarious person with an extremely clever investigative mind which makes him perfect for the editor position of Crimeways magazine, its office situated on the top floor of Janoth Publications. Early in the narrative, we see George Stroud getting into the elevator at ground floor and we get a swift look at the other facets of the building: Newsways, Sportways, Styleways, etc. The buildings and its employess are tyrannically ruled by beady-eyed fascist, sporting a Hitler-like moustache, named Earl Janoth (Charles Laughton).

Mr. Janoth himself micromanages every action within the structure (down to the light bulb forgotten to be switched off in the broom closet, asking to ‘dock the pay’ of one responsible) and his personal will fully dominates the lives of his employees. By the end of the day, George will be taking his long-deffered vacation with wife Georgette (Maureen O’ Sullivan) and his little son. Since George is on the cusp of cracking a sensational case, Janoth denies holiday at the last minute, jeopardizing George’s already fractured relationship with Georgette.


Miffed, George expresses his rage for Janoth to a colleague. He laments that he should have never given-up the low-paying job at small-town newspaper in West Virginia. Janoth’s forced attempt, however, doesn’t work because George quits his work and doesn’t care about Janoth ‘blacklisting’ his name in publication business. But in one of his favorite hang out bar, George meets a ‘beautiful blonde’ Pauline York (Rita Johnson) whose nemesis happens to be Janoth and only recently she was his mistress. 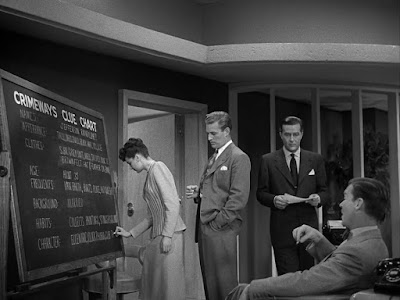 Time flies and later when George phones home, after nearly missing the train, the maid says his wife and kid have left without him. Annoyed by this, George visits different bars with Pauline and gets drunk. He ends up in Pauline’s apartment (of course fully clothed) and is waked up when Janoth pays an unannounced visit. She sneaks out George, but somehow Janoth catches the silhoutte of a man running down the stairs. Inside Pauline’s apartment, raging doubt mixed with in-built malice makes Janoth do an irreparable act, one that puts George’s future under threat.


The weird and exciting plot-twist in The Big Clock is George Stroud getting assigned to find the mysterious man (actually himself) by Janoth and his executive Steve Hagen, played George Macready (to frame the man for crime committed by Janoth). Taking over this forced self-investigation, George assigns his crew of investigative reporters to track the man and the blonde’s movement through the city last night. The ensuing investigation is part-hilarious and part-suspenseful as they uncaringly dissect one man’s emotional nature and his life’s unsavory parts. George, known as the keenest observer of human temperaments and actions, now faces his own choice of tool used against him. It’s interesting because until now George has remained blind to his own impulses. 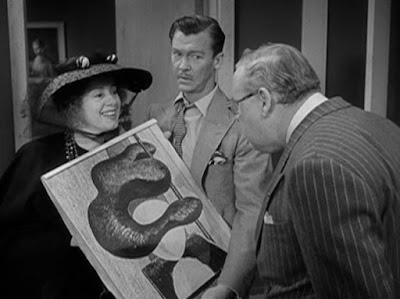 Of course, The Big Clock isn’t a character study but a thriller which elegantly milks the ‘mistaken identity’ factor to create sumptuous cat-and-mouse pursuits. The script also makes good use of little acting bits, providing uproarious comic relief. Elsa Lancester (The Bride of Frankenstein) is particularly funny as the dotty painting artist (one among the many who could identify the ‘man’ accompanying the blonde). The visit to her house, overflowing with children and unsold art, and later her visit to Janoth building provides joyful relief. Unlike many boringly good-hearted wives of film-noir, Maureen O’ Sullivan as Georgette remains rightfully furious has something pivotal to do (in assisting her husband to prove his innocence).


John Farrow’s direction expertly transforms George Stroud’s glitzy work place into a nightmare, visualizing it as a maze where he plays hunter to dispel his hunted status. The unerring clock is obviously used as a symbol to denote the tyranny of Janoth. After evading his chasers, hailing from all the corners of the building, George finally gets into the clock, the very nerve center of Janoth’s empire, and accidentally stops the clock’s movement for a moment. Janoth is panicked by the clock’s halt, muttering ‘It can’t have stopped’. It makes him contemplate his own possible downfall. Farrow also neatly packages the ending, diffusing a sense of poetic justice (by making the ‘fall’ literal). The performances are marvelous all around, spearheaded by Laughton’s suave villainous turn.

Altogether, The Big Clock (95 minutes) is a solid crime thriller of yesteryear with an impressive splash of humor (the film was remade in 1987 by Roger Donaldson as ‘No Way Out’ with a political backdrop).