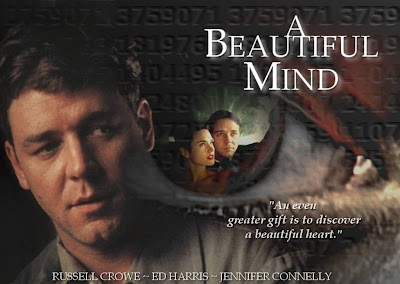 There is always an underlying danger in glamorizing the link between insanity and genius. Its hard to deny as both the insane and geniuses are defined primarily in how they differ from ordinary people. They are removed somehow from the everyday activities in extraordinary/terrible ways. So, we have a urge to see these both as two extreme sides of a normal man. What happens when both these extremes lurks in the background of his thoughts?

Ron Howard's A Beautiful Mind, tells the story of Nobel Prize-winning mathematical genius and paranoid schizophrenic John Forbes Nash, Jr. It's hard to imagine, a mathematician as an movie hero, even a mentally unstable, brilliant mathematician. Yet, A Beautiful Mind is consistently engrossing as a trip to the mysterious border-crossing between brilliance and madness, and as an unusual character study. Even though the real tale has been somewhat conventionalized by very familiar "inspirational" storytelling techniques, the movie's effective blend of emotion and intelligence that will reach all manner of audiences.


Plot
John Forbes Nash, Jr., (Russell Crowe), in 1947 arrives at Princeton for graduate study in mathematics on a scholarship. He has high desires of coming up with a truly original idea that will set him apart from his peers. He is a brilliant mathematical genius, but is also a erratic who lacks social skills. He has a only friend and roommate, Charles (Paul Bettany), who aids him through those difficult years. 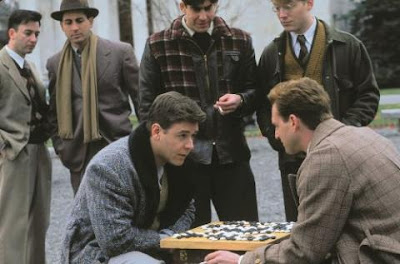 Years later, John is teaching at M.I.T. following an stupefying breakthrough that revolutionizes economics. He is also exercising code-breaking work for a shady government agent, William Parcher (Ed Harris). At this time John meets, falls in love with, and marries Alicia (Jennifer Connelly).Unfortunately, John's happy world soon starts to crumble. John is taken to a mental asylum under the care of the mysterious Dr. Rosen (Christopher Plummer). He is diagnosed as having an advanced case of schizophrenia and several of the most important people in his life are actually hallucinations of his mind.

Nash struggled for years to keep his equilibrium despite his illness.  In 1994, John Nash was awarded a Nobel Prize for his game theory.


Analysis
A Beautiful Mind lacks genuineness in bringing the life of mathematician John Nash Jr., but it makes up for it in superb performances, potent emotions and graceful, emblematic film-making. Russell Crowe, as the famously disturbed Nobel laureate Nash, creates volumes out of minuscule tics and mannerisms. His role is not the most likable hero to occupy the center of a major Hollywood drama.Yet his intensity is such, and his talent so large, that he pulls us into Nash's world. Russell Crowe’s dominance throws the supporting cast into the background, but several of them rise above their underwritten roles. 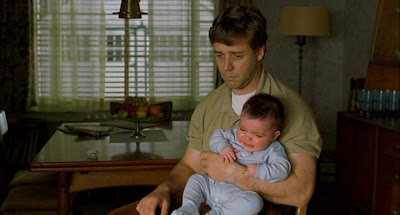 Jennifer Connolly is compelling with her warm, smart and confident work as Alicia. Her complex depiction of a woman torn by love for and fear of the same man, elevates the film to a higher level. Ed Harris is appropriately demanding and mysterious as the government operative engaged in very closely guarded activities. Paul Bettany gives a real standout performance as Nash’s brash college roommate. Judd Hirsch, Christopher Plummer, and Josh Lucas all deliver fantastic turns in their respective bit parts. 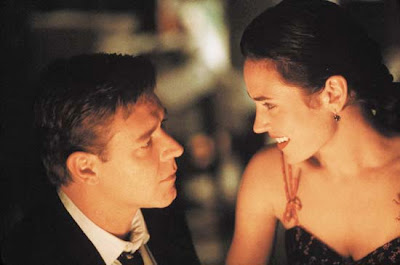 Akiva Goldsman's screenplay, based on the critically lauded biography by Sylvia Nasar, is ingenious in how it deals with the onset of Nash's schizophrenia. Those who are not aware about Nash will likely enjoy the film the most, as it is designed to put you in his shoes and see his life from his point of view. The dialogue is devoid of the mindless babble so prevalent in movies that deal with such high-minded concepts. Director Ron Howard uses exciting visual techniques to show how Nash makes his amazing mathematical connections. He also does a great job of visually showing us what is going on in Nash's tortured mind when Nash is beset by mental illness.

Audiences certainly doesn't have to be a mathematical expert to appreciate what A Beautiful Mind offers.  The film throws many mathematical theories and theorems in the audience's direction, but explains them simply and lucidly; no one is going to become lost or bored. The film uses mathematics just as a symbol. It's about human weakness and the ability to triumph over it. Nash could just as easily be a lawyer, a doctor or a construction worker and the essence of the story would not change.

The film simplifies John Nash's life in pursuit of cinematic, something for which it cannot be blamed. If you want to know the complex and in-depth details of Nash's life read the book. If you want an absorbing, bestirring, well-made film about a brilliant man whose life was almost completely devastated by mental illness, see A Beautiful Mind. Watch "A Beautiful Mind" with your heart instead of your head and you’ll be privy to a profoundly moving experience.

Great review buddy. One of Ron Howard's best films. I also loved Ron Howard's 'Willow'when I Watched it as a kid :)

I have seen this movie and its one master piece. Good write up :)

A very beautiful portrayal by Russel Crowe and this movie made him one of my favorite actors. It's been more than 10 year I watched this movie and your writing reminisced every single emotion I had gone through watching this movie. It remains my all time favorite and Jennifer Connelly is equally brilliant in the movie.

One of my all time favorites :)

As usual a brilliant review! I just loved the movie... Crowe and Conelly are absolutely sublime in their respective portrayals. The tension is all-pervasive. John Nash's theory of equilibrium is indeed one of a kind, but how Howard explains it in the movie is inspiring. From the late 90s to early 2000s Crowe was going through a purple patch in his career but recently there has been a dip. But, I expect him to come back with a bang. In Man of Steel he would play Jor-El... I just can't wait to see him in Brando's shoes. Also, I found Conelly's portrayal of a strong woman very touching. Rest of the cast was also amazing.

@Haricharan, Thanks for the comment. I also liked 'Willow.'

@Tanny, Thanks for the comment. It's an all time favorite for many movie-lovers. Keep visiting.

@Murtaza Ali, Thank you. Russell Crowe had three consecutive great years, with 'The Insider,'
Gladiator,' and 'A Beautiful Mind.' He lost his way a bit in the latter part of the decade, but i am also excited about his role of Jor-el in 'Man of Steel.'

Great review again:).It is one of my fav movies:).Great performance by Russel Crowe as well:).

Awesome review. This movie was great. Please check out my review of A Beautiful Mind and follow my blog if so inclined: http://bitesizemoviereview.blogspot.com/2012/08/review-beautiful-mind.html