Maria Full of Grace - Human Side of The Drug Trade 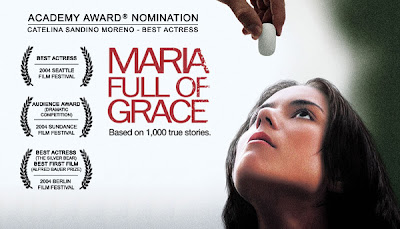 Have you ever heard about a term "mule"? It is applied to an animal- a low, plodding, stupid creature whose sole valuable quality is that it can transport large amounts of cargo without choice or complaint.What if the human beings apply this same term to their fellow humans? In the world of drugs, mules are used to carry the product into countries without being detected. The drugs are not stashed in luggage or sewn into jacket linings, but they are transported in the stomach of the mule. "Maria Full of Grace" tells the stories of human 'mules.'

The feature debut from writer-director Joshua Marston is a coming-to-America story that presents this country as a tempting promised land where life can be harsher than whatever the newly arrived endured at home. And it is a remarkably assured and humane feature debut.


Plot
Maria (Catalina Sandino Moreno) is an spirited and attractive seventeen year old who lives in a small town in Columbia. She works in a large industrial rose plantation along with her friend Blanca (Yenny Paola Vega), for low wages. Maria shares a tiny bedroom with her older sister, who has a baby who’s always sick. Maria discovers that she's two months pregnant by a boy she doesn’t love and who doesn’t love her. she also quits her job, when the supervisor refuses to let her go to the bathroom. 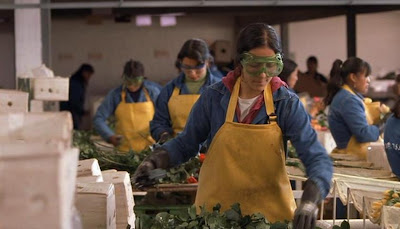 Refusing to beg for her job back or to marry her boy-friend, Juan, Maria goes to  look for work as a maid. On the way she meets a self-assertive young guy who waxes on about a way to make big money fast. Tempted by the promise of making $5,000 in a few days — a sum that would change her life — Maria becomes a drug mule, transporting heroin by ingesting 62 rubber pellets containing the drug. Maria undertakes the journey with Blanca and Lucy. The three young women confront the perilous odyssey from their native land to the unknown streets of New York. 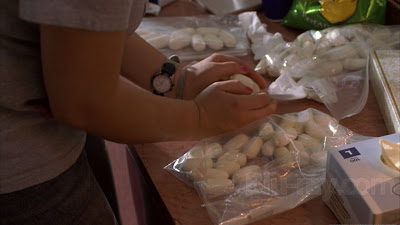 An eminent mule makes it through, dispels her cargo, spends a week in the United States and gets her money for the delivery. But if she fails, there is no one to save her.


Analysis
Director Joshua Marston constructs the film slowly, using the first third of the story to detail Maria’s day-to-day lived existence in Colombia. He stands out at depicting life as it is, detailing the realities of poverty without sinking into sentimental cliches. The path the film takes to get into the details of the drug-smuggling process is absorbing. Most of the tales about drugs don't actually show us how the drugs are smuggled into the United States, let alone show us how mules are recruited. This movie does both, and it takes that additional step to show the human cost to those who get caught up in the drug trade. The actors, many of whom Marston cast in neo-realist fashion to play people much like themselves.

The movie would drown us in its despair and anxiety were it not for Catalina Sandino Moreno's calm, sweetly innocent gaze. Her transition from a brash impoverished teenager to a toughened young woman and immigrant feels guileless and fiercely convincing. As Maria, Moreno transforms her journey into  an acting showcase as every hope and fear is written large on the actress' face. Her stubborn, vulnerable and frequently fearful turn has no need of artificial stimulants. Lopez as the more experienced but equally scared Lucy, and Vega, as her spirited but less grounded friend Blanca both make strong impressions. 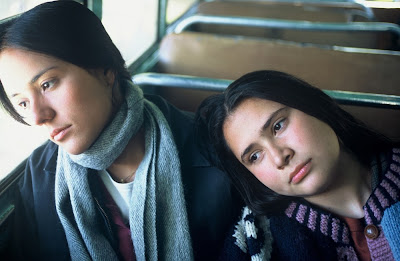 The movie's title and poster imagery (a young woman receiving communion, with the bread being replaced by a pellet) might lead a potential viewer to expect Maria Full of Grace to be overflowing with religious image. But, it isn't. The implied criticism mostly dwells on the political system. The three women are presented as victims, but they enter into the declaration with the Devil willingly. Like all who make such a pact, they are shocked when payment is exacted so ruthlessly.

Like many gritty realist sagas, Maria Full of Grace is disturbing, and it is impossible to sit through the film and not affected by the circumstances of the characters. Yet, in-spite of the dark nature of the material, the film is not steeped in bleakness. Women like Maria might surely exist, and Marston's fascinating cautionary tale rings terrifyingly true. Those who appreciate serious dramas, shouldn't miss this one.

Good one! Why do I get the feeling one of Surya's Tamil films had a similar way of trafficking drugs? I think it was 'Ayan' or may be someother film. But, there was definitely one.

Hi
Your posts are sometimes about movies that I have not heard of but the way you describe instills a wish to watch them :)

@Hari
You got it right pal. A part of the plot of " Ayan " shares a similar scenario.

An perfectly tailored article on the film. Perfect choice of words that give a better idea to the viewer, what to see and what to expect from this work. Cheers Pal.

I saw the movie after coming thru ur blog the other day..Good choice I must say..

@Hari, Thanks for the comment. Ayan movie used the drug trafficking method shown in this movie.

@Ghazala, Thanks for the comment, and do watch the movie.

I'd heard of the film but never actually got down to watching it. I've seen a number of documentaries that tackle this issue so I'm aware of it, but still it would be interesting to watch it in a film format.

Thanks for yet another interesting movie.
How do you feel watching so many movies?
As in..ek ke baad ek?
[one after the other]

@Raghav, Thanks for the comment. I have seen some documentaries regarding Mexican gangs and its drug trade, but this movie is more heart-breaking.

@Divenita, Thanks for the comment. I feel great and alive, watching various kinds of movies.