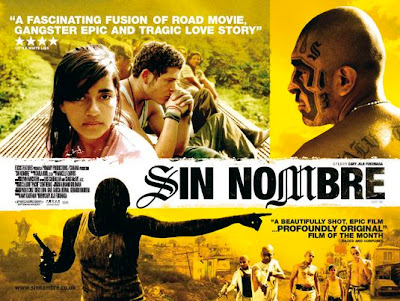 The dream and destination is to reach America. The terrifying part of that dream is undertaking the journey to get there. Writer-director Cary Fukunaga’s captivating movie, "Sin Nombre" takes viewers into a shadow world inhabited by many but noticed by very few -- that of Central American migrants making the perilous trip through Mexico to get to the United States border.

The harsh realities of this movie could be pulled straight from today's World news, with their overlapping plot-lines of fugitive immigrants and gang violence along the U.S.-Mexico frontier. But, how did it go so right? when the movie could've easily been gummed up by melodrama. Well, the source for that, is the heart and mind of writer/director Cary Fukunaga, who exhibits technical skills and life insights not often found in debut filmmakers.

Sin Nombre is about the factors that cause some individuals to risk incarceration, deportation, and even death for a chance to cross the border and escape cycles of poverty, dis-empowerment, and gang violence.


Plot
At the center of this immigration thriller, is Sayra (Paulina Gaitan), traveling with her father and uncle from Honduras up through Mexico, headed for New Jersey and a better life. Walking through jungles and jumping trains loaded with others looking to migrate north, theirs is a dangerous road with no sure arrival. 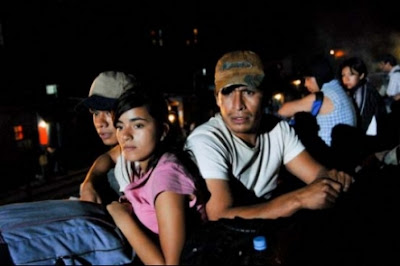 A different family drama unfolds, in the Mexican state of Chiapas. Casper (Edgar Flores), a young, tattooed man, recruits Smiley (Kristyan Ferrer), a 12-year old, who is about to be inducted into the local Mara gang. The tough initiation ritual starts, where the young boy is severely beaten and kicked. Then the newbie is forced to shoot a captured member of a rival gang. Secretly, Casper has a romance going with Martha (Diane Garcia), but his occasional disappearances arouse the suspicions of gang leader Lil’ Mago (Tenoch Huerta Mejia), a ruthless character whose entire face is covered with dense tattoos. 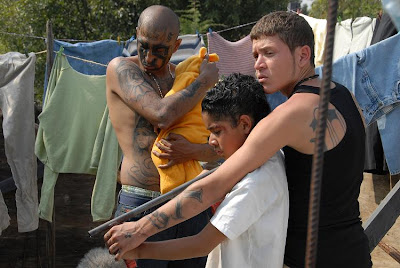 Martha doesn't like being concealed, and her reckless disregard for gang decorum sets in motion a series of violent acts that results in Casper fleeing from his supposed associates. Here, Casper crosses paths with Sayra, who is illegally riding atop trains. The narrative that subsequently unfolds balances murder and mercy, retaliation and redemption.


Analysis
Rich information or details make the immigration thriller "Sin Nombre" vivid and haunting. The minor objects, like a worn photograph, a creased map, the permanent claims of gang tattoos on young men — hint at writer-director Cary Fukunaga's talent for capturing the human ache in the everyday. Hope and pain are in the details. Cary's presentation of details about the trip to the north made by so many along the Mexican railroads evidences the accuaracy of someone who has investigated the process. In this story, Fukunaga had at least two points to highlight. First, he illustrates the power and terror associated with gang-related violence, something that is on the rise in Mexico. Secondly, he offers a perspective of some of the tribulations undergone by illegal immigrants. 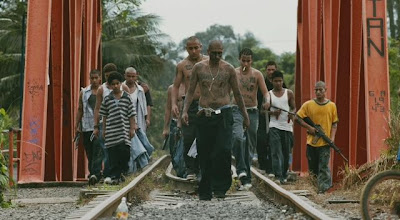 Also, Fukunaga extraordinarily strips much of the sentiment from the classic "illegal immigrant" tale. The villains and heroes of this are all Mexican -- even the shouts of warning, are about Mexican immigration agents. Shot in rich tones by Adriano Goldman, the movie beguiles with glimpses of the Mexican countryside captured from the tops of the freight cars. If it weren't for the deft cinematography and the gorgeous score, much of "Sin Nombre" could pass for a documentary.

Performances by the young actors are uniformly engaging without trying to be ingratiating. Edgar Flores is great as Casper, showing the pathos of a character who inflicts suffering on others but more on himself. Paulina Gaitan provides a believable performances as a kind, brave Sayra. The relationship between the two is effectively understated. They do not fall in love in the formal sense but they come to rely upon and care for one another. 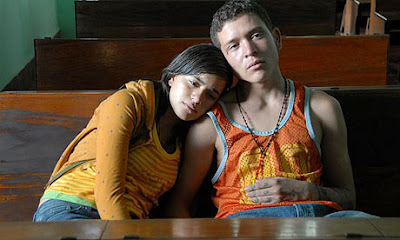 There's a good deal of food for thought in Sin Nombre -- how the cancer of gangs spreads through generations, and how the divisions between countries and between countrymen are self-perpetuating and lethal. It builds to a satisfying conclusion, and even as the credits roll, its implications echoes, and its emotions lingers. The average movie-goer will feel as if he or she experienced something rather than acting as a mere observer of characters going through the motions.

Sin Nombre is translated "without a name" and for most people, the hordes of immigrants heading for the promised land of America are nameless and faceless. The poverty here, is not romanticized, and there is no lyrical message about fate and love. It's plainly built on a simple math - faceless millions "without name" want to come to America, but very few make it. The 'Why?' is this movie.
Trailer
Sin Nombre - IMDb
at July 10, 2012
Email ThisBlogThis!Share to TwitterShare to FacebookShare to Pinterest
Labels: Latin American Cinema, Road Movie, Social Drama, Thriller

Haven't watched this one yet. Plot looks promising. Will watch and get back with a comment

I've read mixed reviews about this one. Shall watch it some day.

@Haricharan, This is a splendid movie. You should watch it especially for its cinematography, and direction.

@Raghav, Thanks for commenting, and do watch the movie.

@Mak, Thanks for visiting.