The Decade That Made A Star : Tom Hanks In The 90s 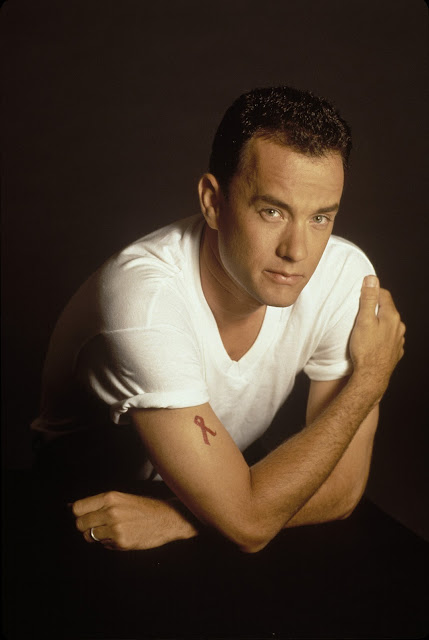 Tom Hanks dominated the ‘90s like no actor dominated a decade. He got nominated best actor three times and won it twice. Three of his films were the No. 1 movie of the year (“Forrest Gump,” “Toy Story,” and “Saving Private Ryan”). The success of tom hanks movies not only relies on his movie choices but on the charismatic personality of tom hanks himself. Since his early comedy movies, tom hanks has had a likable charm that has attracted audiences.

Tom Hanks came to films following the moderate success on TV. It was Tom Hanks’ portrayal of a 13-year-old boy trapped in the body of a 35-year-old man, Josh, in  "Big" (1988), which really established his reputation as a box-office success and a gifted actor. His brilliant acting earned him a Golden Globe for Best Actor, as well as his first nomination at the Oscars.

"Joe Versus the Volcano" (1990, opposite Meg Ryan) and "The Bonfire of the Vanities" (1990) kick-started the great 90s for Tom Hanks, but both these movies were big failures. Then, Tom moved to a more serious part when he rejoined director Penny Marshall of "Big," for "A League of Their Own" (1992) in which he portrayed a washed up drunk and former player who rediscovers his joy of the game through managing a winning team of female players. The next year, Tom reunited with actress Meg Ryan in "Sleepless in Seattle" which received even more recognition and became one of biggest hits in 1993. I guess both these are all part of preparing audiences for what was coming next.


Dual Oscars
Tom’s big break arrived in 1993 when director Jonathan Demme cast him for "Philadelphia" in the starring role of Andrew Beckett, an gay attorney with AIDS who bring suit against his former employee for discrimination after getting fired. Tom Hanks won an Academy Award for his sensitive portrayal. 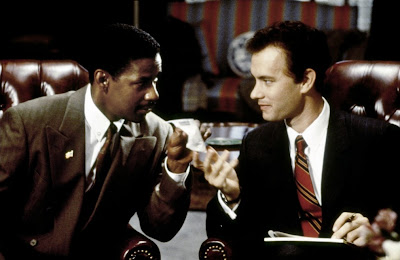 The early 90s attitude towards AIDS is compactly and unquestionably summed up in a single scene of Philadelphia. Andrew Beckett (Hanks) goes into Joe Miller's (Denzel Washington) seeking legal counsel for his case against his firm. As he shakes hands with Miller, Washington's character notes Beckett's deteriorated appearance and inquires about him. Beckett explains in a direct and unceremonious manner. "I have AIDS." In that moment, the audience registers a distinct change in Miller's expression, from one of amiability and goodwill to one of shock and horror, and witnesses his sudden withdrawal out of the handshake. This scene can be easily imagined in reality for the viewer of the early 90s.

To circumvent this, Philadelphia attempts to reconcile, educate and overturn some of these stereotypes and real-life reactions by creating, portraying and presenting characters that are likable and that audience members can relate to. Tom Hanks lost 37 pounds for the role, and cemented his standing as a leading dramatic actor. Andrew Beckett was soon followed by perhaps the most popular tom hanks character, Forrest Gump. 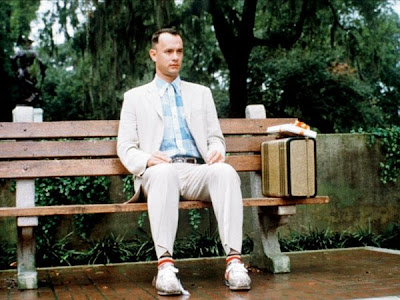 The role of Forrest Gump required hanks to move away from his younger acting style, which mostly drew on physical comedy. So, Hanks adopts a remarkably subtle range of voice and tones and glances to suggest an inner life for a fantasy character. Audiences cheered for Forrest as he overcame obstacles, became successful, and even fell in love. He won another Academy Award, making him only the second actor in history to do so two years in a row. The premise of Forrest Gump relied on a man who was accidentally central to American history between the 1950s-1990s.


An Astronaut And A Animated Cowboy 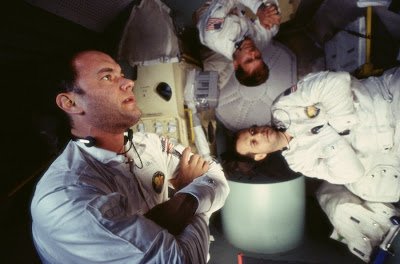 For the first time in his career Tom Hanks portrayed a real-life person, the astronaut Jim Lovell, in his next hit "Apollo 13," where he united with director Ron Howard. Apollo 13 was widely touted as deserving yet another Oscar, but Tom only nabbed an award of "People's Choice for Favorite Actor in a Dramatic Motion Picture" In 1995, Tom provided his voice for the cowboy Woody in the first full-length computer-animated film ever "Toy Story". The next year, needing to get away from all the attention he got after the success, Tom Hanks made his directorial debut with "That Thing You Do!" (1996), a sixties-era comedy/drama about a band. While not a blockbuster, the film demonstrated Tom's flair for eliciting strong performances from a cast of relative unknowns.


Gritty Dramas About The Human Condition
Two years later, in 1998, Tom went back to one his passions by creating a miniseries for the HBO channel about the history of the U.S. space program, "From the Earth to the Moon". In addition to serving as executive producer on the series, Tom directed the first segment, sharing the 1998 Emmy Award for Outstanding Miniseries with co-producers Ron Howard and Brian Grazer. Also, in 1998, Hanks as Captain Miller teamed up for the first time with Steven Spielberg for his highly-praised WWII drama "Saving Private Ryan" (1998). Firm enough to be plausibly in command, sensitive enough to breakdown weeping when the other soldiers can't see him, capable of outrage when of his men disobeys orders to rescue a little girl, Miller is one of Hanks' richer roles. "Saving Private Ryan" earned his fourth Academy Award nomination for Best Actor. 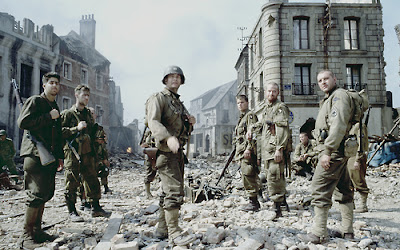 Later that same year, Tom Hanks and Meg Ryan co-starred for the third time in a romantic comedy "You've Got Mail." Hanks next reprised his role of Woody for the sequel "Toy Story 2" (1999). It skyrocketed to No. 1 at the box office, that year. At the same time, he played the role of prison guard in "The Green Mile,"  an adaptation of the Stephen King novel. The movie is about a man, John Coffery (Duncan), who appears on death row. But his huge presence is misleading as he proves himself not only a sensitive soul, but a man imbued by the power of God. When Coffery performs miraculous acts of healing, Edgecomb (Hanks) begins to believe he is innocent. 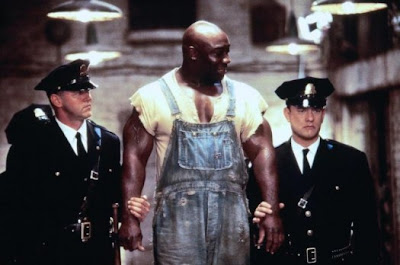 Despite the cliches and stereotypes the film's cast managed to lift it from the depths of the commonplace and make watching it enjoyable. Hanks, as usual, was solid and effective. At the end of the 90s, Tom experienced a colossal success at the box office because of his involvement in several big hits and was named Box-office Star of the Decade.

In the 90s Tom Hanks established himself as one of the finest and most respected actors of his generation as well as 'the nicest guy in show business' and 'the most trusted celebrity'. A good actor’s performance is rated by his choice of roles, films, his body language and his ease to carry the character throughout the film. Hanks perfected himself in all these standards. The 90s made Tom Hanks as the biggest star, and a versatile acting genius.

WHat more could I say other than accepting every word you've used to define Tom and his work. A brilliant actor who could literally make any role looks easy. Great post about a great actor :)

Really liked the flow of the post. As usual you serve something that lingers on the mind for long.

One of the best actors ever...I have sometimes felt that Aamir Khan bears a faint resemblance to him...

I am well aware of the history. But I want to give you a different perspective. The first movie I saw of him was "Big". His looks reminded me of Aamir Khan. Their careers also follow the same pattern. Have you noticed it?

@jaish_vats, yeah Aamir bears some resemblance with Hanks, in acting or career wise.

@Nona, Thanks for commenting. Aamir and Hanks might have the same career pattern. But, Hanks after "Road To Perdition" didn't get those powerful roles like the ones in 90s. Whereas Aamir, now 47 is giving great performances with every single film. So, let's hope Aamir shines well more than now, when he's past 50.

Tom Hanks is the best. That's all I can say.

I am a big fan of Tom Hanks and almost watch his all movies. You post is very refreshing.
www.rajnishonline.blogspot.com