The Dark Knight Rises - A Fitting End To An Epic Saga 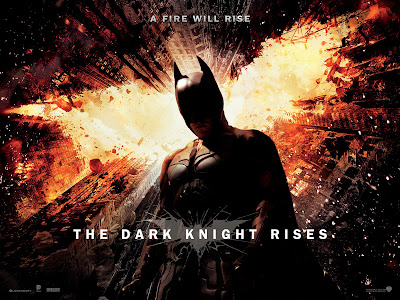 Fear is an emotion you don't often come across in a summer block-buster, and especially in a super-hero movie, which tend to be all about the bluster conferred by superpowers and ludicrous scenarios. Well, not in this trilogy, particularly not in this movie. It incorporates human weakness and realistic threats of nuclear and economic destruction, into the densely written saga written by Nolan brothers and David S.Goyer. But the most important question is, does the "The Dark Knight Rises," attain the impossible, which is to bring a cherished cinematic chapter to a close, yet manage to leave fans feeling not desolate but cheered? The answer is an unequivocal yes.

Batman was always special. For millions of fans, Spider Man reflected the person they are/were. Iron Man and Super Man represented represented the person they dreamed of becoming. But Batman is comprised of something different, darker, more damaged. He was a man who brooded in dark corners, and lived with pain. And not because of a gamma rays, or some doctor’s experiment. Because he chose to. The character's appeal lies there.

"The Dark Knight Rises" is much more of a film we need, as opposed to the film we want. It doesn't offer you the pure-popcorn pleasure of something like Joss Whedon's "The Avengers." But, it ends the innovative and modern "Batman" franchise with a blustery bang.


Plot
To condense the plot of the movie would take a full graphic novel, so I will just hit the high notes. In the universe of Gotham City, it has been eight years since Harvey Dent went mad, since the Batman (Christian Bale) accepting the blame, disappeared into the shadows. The movie kick-starts with a spectacular set piece, a mid-air showmanship in which the movie’s villain, a terrorist thug named Bane (Tom Hardy), kidnaps a scientist. Bruce Wayne/Batman's only contact now is Alfred (Michael Caine), his loving and loyal butler. 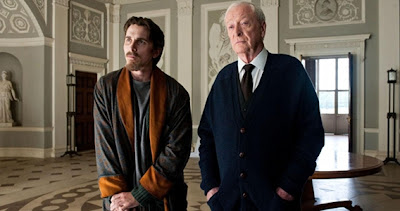 Four diverse characters, Selina Kyle (Anna Hathaway) -- a cat burglar, John Blake (Joseph Gordon-Levitt) -- an idealistic cop, Miranda Tate (Marion Cotillard) -- a wealthy woman with a clean-energy project, and Bane (Tom Hardy) --malevolent terrorist with a clumsy mask, each with their own agenda, seek to bring Wayne back to public life. Lucius Fox (Morgan Freeman), Bruce's mentor, is ready, willing, and able to assist him in the creation of any invention he needs for his adventures as Batman. 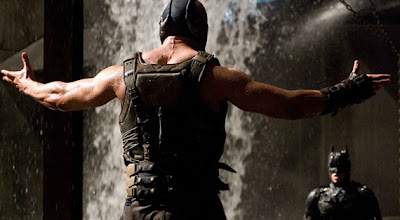 Stealing a nuclear bomb, Bane is bent on destroying the police force and eventually the city. He liberates the criminals from prison and, in the spirit of the French Revolution, gives the underclass a chance to avenge themselves on the rich and the powerful with charade trials and grim executions. Will Bane's destructive and destabilizing methods bring Batman out of his seclusion? Well, yeah, most likely, especially given the name of the film.


Analysis
The narrative contains an extraordianry number of characters and most of which are individually developed and fully realized by the talented cast, which includes three generations of actors, from vets like Michael Caine and Morgan Freeman to newcomers to the series like Joseph Gordon-levitt. Christian Bale’s finely drawn Bruce Wayne and Batman, is a darker and more brooding character than we’ve seen in past movies. It’s an understated and quite possibly one of the best roles of Christian Bale. The general excellency of Bale's performance, forces Wayne to reckon once and for all with the alter ego he's fashioned for himself and Gotham in the name of justice. 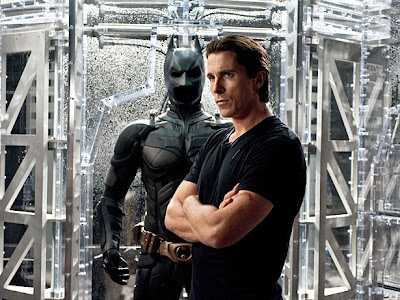 The villain, Tom Hardy as Bane never equals Heath Ledger's charismatic-psychotic Joker, but neither is a one dimensional caricature of evil. With his mesmerizing expressive eyes, Hardy makes Bane, a creature of distinct malevolence with rumbling speech patterns. And, with his terrorism, Bane does ask many interesting questions. The most decisive new character is of Anne Hathaway, a.k.a. Cat-woman. The actress nails the sarcastic, hard-edged tone necessary to make this morally ambiguous vixen a dynamic contrast for the Caped Crusader. Marion Cotillard as the business tycoon Miranda Tate, fits very well into the intricate puzzle. Joseph Gordon-Levitt acquits himself  very well, by handling the heavy dramatic scenes. Morgan Freeman, Gary Oldman, and Michael Caine give their normal excellent performances.

But, ultimately the movie belongs to one guy: Christopher Nolan. Nolan stages every sequence with  spectacle, grandeur and even a touch of wit. He carefully hits all the beats of the superhero action flick in the right order. Nolan impressively expresses a seething vision of urban anxiety that speaks to such issues as the greed and complacency of the 1%, the criminal neglect of the poor and oppressed, and above all the unsettling sense that no one and nothing is safe. Nolan and his brother Jonathan co-wrote the script with David S. Goyer, who all keeps piling it on until the surface of the genre threaten to snap. The script is a bit complicated, but the scope and pace and endless details conspire to keep a viewer mesmerized. Hans Zimmer gives a magnificently meditative score. 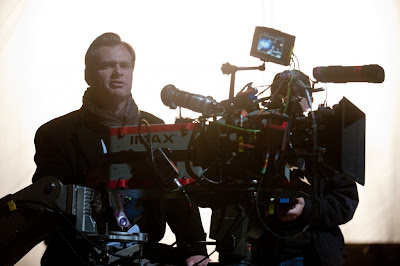 The impressive success of this franchise lies with its gifted director, who turned his ability and attention to such an commercial project is beyond heartening in an age in which the promise of film as a popular art is tarnished almost beyond recognition. Nolan has said he's done with the Batman movies now. Even though The Dark Knight Rises ends in a furious finale of chaos, carnage, and cataclysm, the filmmaker has brought things to a satisfying closure. It is a rare block-buster, the one that provokes viewers of all ages, to reflect on broader social problems of post-modern society.

“The Dark Knight Rises” isn’t the special effects extravaganza, like the “The Amazing Spider-Man,” or “The Avengers,” which reliably delivered fan-friendly archetypes. It is a complicated, character-driven movie that asks that you come to the theater prepared and that you watch the movie engaged. The difference between other super-hero movies and Nolan's Batman movies is similar to the difference between a magic, and a miracle. A magic is an wonderful charming act, that might be reproduced many times. But, a miracle is an amazing natural occurrence, which you might come across rarely.

"The Dark Knight Rises," which concludes the Nolan's Batman trilogy is a 'miracle.'

So, a much-watch movie, for the summer? Will do :)

Arun, i didnot read this review since i am eagerly waiting to watch :)
I am a huge fan of batman.

Great review again:). Nolan is pure magic:). Can't resist any of his movies:). Hasn't made a bad film yet:).

A magic is an wonderful charming act, that might be reproduced many times. But, a miracle is an amazing natural occurrence, which you might come across rarely...

Loved the way u reviewed it...Superrrr

Neat one Arun :) Totally agree with your opinion, this film is much character driven unlike other superhero films. Great post once again

Brilliant analyses as always but this time around I beg to differ. Please do check out my review at:

".. but neither is a one dimensional caricature of evil." aptly put. Nolan deserves the accolades he gathering. Grt Post .. loves the review

Watched it yesterday and absolutely loved it...your review is excellent. You have described the movie really well without giving away the story..

No doubt gr8 movie- NOLAN is superstar. But this film lacked minuscule perfection.All in all entertainer...

Thanks for the review:). Good one again;).

Solid review Arun. This is probably my favorite movie of the year for one reason and one reason only: it was probably, if not, the most epic piece of cinema I have seen in quite some time. To me, it was just about perfect, but I can see others not being so hyped-up about this one as well.

An epic end to an epic trilogy...
Have already watched it twice in the last 3 days...I guess today would be the third. :) :)

your review was good..

Saw the film and loved it :)

Rightly said, it is a "miracle"

I'm not a fan of super hero movies primarily because the characters seem more like caricatures.Might just catch the batman trilogy based on your review. Thanks

Saw the movie yesterday. As expected Nolan brings ambition, complexity and character development to his movies. It would be very difficult to top this franchise. As a bat-o-phile, I was very satisfied by this trilogy after watching the horror that was Batman and Robin in '97.

Excellent review, I watched it last weekend. It was a great, very satisfying end to the Nolan trilogy.