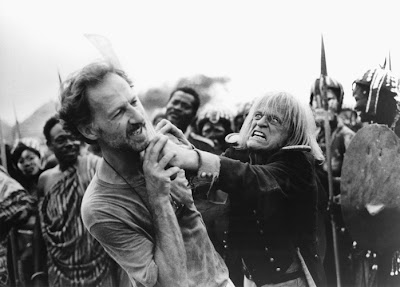 Klaus Kinski's film career began 25 years before his performance in Werner Herzog's remarkable 'Aguirre: The Wrath of God." Yet of the many directors with whom Klaus worked, Only Herzog captured the originality and full range of the actor's talents. In their films together, Kinski's passion and power became the painting brush with which Herzog multicolored his vivid portraits. It was an inspired collaboration of an actor's style and a director's vision.

Kinski was a renowned and often controversial stage actor in Germany. His work in films consisted almost entirely of well-paid roles in second-rate European features. There were a memorable exception to this pattern - he appears briefly in Doctor Zhivago, as a passenger on the long train ride, and as a villain in Leone's Few Dollars More - but not until 1973 and Aguirre did a film role reveal the true measure of Kinski's menacing power and maniacal fervor.

Klaus Kinski, lived briefly in the Munich boarding house where a 13 year-old Werner Herzog shared a room with his mother and two brothers. The teenager, Herzog could never have guessed that the young actor whose antics included locking himself in the bathroom to smash tub and toilet, would one day star in films that he himself would direct. Once Herzog heard some noise coming from Kinski's room: it was Kinski taking a running start. A moment later he crashed with the door into the living room and immediately started screaming with fury. It turned out his shirts had not been ironed quite right.

These incidents encompasses the bizarre relationship between them, which developed over the course of working on five films together. The relationship varied from professional admiration, pure hatred, and honest to goodness friendship. It is not a surprise that someone like Herzog—a bit of a character himself—would be attracted to someone like Kinski. There were on-set fights. Kinski shouted about anything and everything.  Sometimes the crew took the brunt, other times the cast. But Kinski’s favorite target was always Herzog, the only man who represented any real challenge to his own egomaniacal dominance. Herzog claims that when Kinski decided to quit the film after a particularly heated spat he had to threaten him with a gun to keep him on set.  Kinski claims he was the one with the gun.

Herzog exploited Kinski’s propensity for mania. And the rage provoked by Herzog, led to the madness of "Aguirre," their first collaboration.


Aguirre: The Wrath of God
As a Spanish explorer going slowly mad in the jungles of South America, Kinski is the personification of Herzog's theme of the destructiveness of absolute power. Yet Kinski is also a strangely heroic figure, a man obsessed with his fantasies, and in his own mind, the instrument of an angry God. Aguirre opens at 15,000 feet in the Andean mountains on a slick vertical descent and the rest of the shoot is spent on Indian-made rafts cutting through solid jungle through a turbulent river. 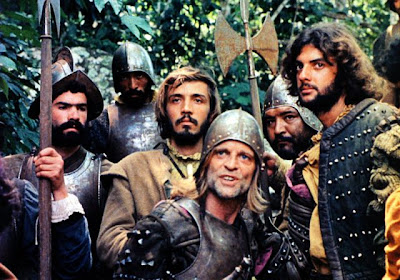 To the set Kinski brought rages prompted by any irritant – the food, mosquitoes, rain, or noise. One night the extras were playing and drinking after a long shoot, Kinski became so enraged he took a Winchester and fired three bullets into the tent of 45 men. By some fluke no one was killed, but he did shoot the fingertip off of one man. Surviving Aguirre, the two men then reconnected for Nosferatu the Vampyre (1979), a retelling of F.W. Murneau’s atmospheric silent film, Nosferatu (1922).


Nosferatu the Vampyre
For Herzog there was never another option for the lead. Despite ashen face, sunken-eyes, and razor sharp fangs, Kinski's performance conveys the powerful eroticism inherent in the vampire legends, and it is this blend of oppressive horror and sexuality that sets the tone for Herzog's film.


Woyzeck
That same year they re-teamed for Woyzeck, a film about a soldier on the brink of  madness. Herzog again makes use of Kinski's compelling intensity this time channeling it through a powerless character driven to an act of terrible violence. This role was perhaps frighteningly close to the actor's own experience as a prisoner of war during World War II. So, Kinski reveals a vulnerability as raw and dangerous as an exposed nerve.


Fitzcarraldo
Fitzcarraldo (1982) is about a man attempting to build an opera house in the middle of the jungle.  Mad determination was again a running theme in this movie. The rages of Kinski, on the set prompted the Campas Indian extras in Fitzcarrraldo to offer to kill Kinski. Herzog exploited their sentiment in a scene in which the Campas chief and his followers surround Fitzcarraldo and crew while they eat in the galley of their grounded steamboat. The chief rants Fitzcarraldo/Kinski in a discomforting riot act veiled in his own language. 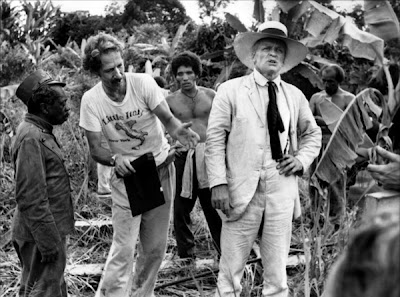 For this movie, an Amazonian 300-ton steamboat was heaved up one side of a mountain and down to the river on the other, clearing a jungle from its path. Clearing a wrap of rain-forest up the mountain face, a tree-cutter was bitten by a deadly chuchupe snake. With serum twenty minutes away and two minutes to cardiac arrest, he cut off his foot to contain the venom.

Unlike Aguirre, the dream here is benign and curiously joyful one, not the expression of a lust for power, but a desire to bring opera to a remote jungle town. The vital role that dreams and impossible quests play in our lives has been a pervasive theme in Herzog's work, and never has it been more eloquently articulated than by Kinski's performance in Fitzcarroldo.

Five years later the duo filmed their fifth and final collaboration: Cobra Verde (1987). A bandit is hired by a plantation owner to watch over his slaves, who is eventually banished to Africa where he is tormented and ridiculed. Driven to the brink of madness, the bandit leads a rebellion against an African King. Herzog claims that Cobra Verde was so intense that it broke Kinski's spirit and led to his death by heart attack four years later. Kinski went on to do two more roles after this, but Cobra Verde shows us the death throes and valediction of one of last century's most dynamic, powerful and important actor.

Kinski will be best remembered, for his roles in Herzog's films. It was in these few films that Kinski enjoyed his finest moments on screen. In bringing Herzog's personal vision to life, Kinski achieved the highest expression of his own unique abilities. Despite repeated threats, Kinski had never quit on Herzog because Kinski needed his madness funnelled and focused. Like the Amazon Jungle, Kinski was ferocious, and Herzog admired both the Jungle and Kinski for its ferociousness.

Werner Herzog On Klaus Kinski (During the shooting of Aguirre)

Great write-up ... I don't comment often but do read them. Carry on.

@Mak, Thanks for the encouragement.