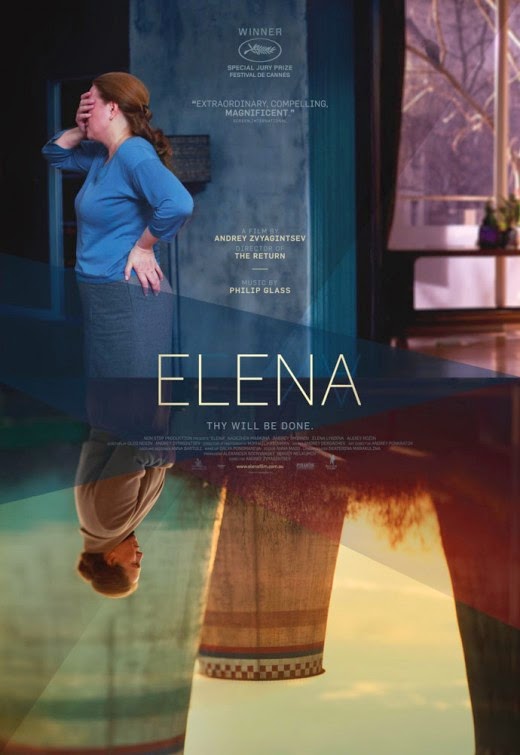 Russia’s renowned film-maker Andrey Zvyagintsev has only directed four films (made an exceptional debut with his 2003 film “The Return”) but has won more than forty international awards, and his films are justly compared with the early works of Tarkovsky and Sokurov. On the surface his stories are very simpler, but within that simplistic outline, he weaves a distinct critique on the contemporary Russian society as well as on the moral degradation of humanity at large. He imbues many enigmatic elements that compel a viewer to observe his works in an active manner. He makes us wrestle with our mind & heart to coax out the meaning of some supremely enigmatic shots. In his first two films, Zvyagintsev opted for non-specific settings, but his third-feature “Elena” (2011) is clearly set in the post-Soviet Russia, where the class discrepancy continues to haunt the Russian oligarchy.

Andrey has described “Elena” as ‘a moral catastrophe’ and has turned into the territory of his favorite Dostoevsky. Pervasive melancholy and knife-edged irony seems broods over the film, reminiscing us a 19th century short story from the Russian literary masters. The movie starts in the usual contemplative manner as a crow lands on the barren tree, situated outside an expansive house. The final shot also shows the same barren branches. May be the director through those branches is echoing the deformed state of the family at the heart of this story.  Middle-aged Elena (Nadezhda Markina) awakes to the sound of an alarm clock. She combs her hair, prepares tea or coffee and proceeds to a bedroom to wake an older man named Vladimir (Andrey Smirnov). The separate bedrooms and Elena’s sturdiness indicates that the woman might be the house-keeper.

But, it turns out that Elena is the old man’s wife, and later we also learn that she was once Vladimir’s nurse. Elena has risen in class only after marrying Vladimir, two years back. The couples lead a calm and luxurious life but we could sense a palpable tension between them. Their mutual affection and respect shatter whenever the subject of their respective children comes to light. Elena financially supports her indolent, alcoholic son Sergei (Aleksei Rozin), who lives with wife and two kids in a seedy neighborhood. Sergei’s elder son Sasha is about to finish his school and with his don’t-care attitude, he may either end up in army or prison. Vladimir supports his estranged and spoiled daughter Katerina (Yelena Lyadova), although she doesn’t visit him often.

Elena, blinded by her blood ties, often takes a trip through train and bus to her son’s dilapidated neighborhood. She begs Vladimir to pay for Sasha’s college fees as they all know that the boy’s grades won’t land him in a college. Things go bad for Vladimir one day as he suffers from a devastating heart-attack. In the hospital, he partially reconciles with his daughter, which leads Vladimir to decide on his final will. Later, when Vladimir is recuperating at home asks Elena for a paper to draft his will as he called for the lawyer the next day.

Although the movie’s titular character takes risks and bears consequences for the sake of love, the character doesn’t express any sincere act of love. Sergei sits with his aloof son to play video games. Don’t mistake that the guy is trying to bond with his son; he sits there to further disconnect him from the familial responsibility as mommy has brought home more money. We even don’t know whether Elena’s desperate efforts come from a sense of duty she feels towards her son’s family or from the unquantifiable motherly love. Elena, as played by Markina, seems to have relinquished all tangible human emotions over the years. The internal vacuum she feels in the end makes the film more realistic and renders a more disconsolate feeling.

Director Zvyagintsev is said to have used certain tropes of American film-noir movies, but at the same time there are certain powerful moments that makes us think back the classic Russian literature. Towards the end, Elena rides a train with thousands of rubles and suddenly the train comes to a stop. She clutches to her hand-bag nervously as uniformed men rush through the coach. The guilt inside her involuntarily guides her expressions, but the event that made the train stop is even weirder: a dream-like situation that tries to say something ‘symbolic’. Zvyagintsev also hints at the ubiquitous nature of violence in the Russian society through a discursive sequence, where Sasha & his group fight with other boys in a wasteland. It indicates at a younger generation who seems to have inherited the malice of the previous generations. 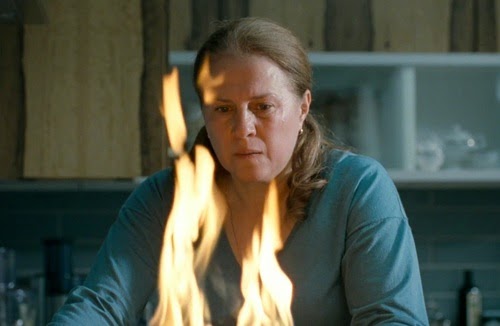 Andrey Zvyagintsev also stops us from forming easy opinions on who is the story’s villain. At the end, we feel pity for all characters and don’t’ choose any sides. The director creates a world where coldness seems to have pervaded on all corners. The poor neighborhood with brooding towers of nuclear reactors and the gorgeous, spacious apartment of the rich has the same coldness because the humans who inhabit these places are not spiritually different from each other. In most of the indoor scenes, a mindless reality TV show seems to be running on the background. May be the director is symbolically representing that these inane shows modestly contributes (fixation on money may be the largest contributor) to that kind of ‘emptiness’.

“Elena” (107 minutes) depicts the age-old conflict between haves and have-nots with brutal honesty. It caustically remarks that surviving in a withering society is itself a punishment for our past crimes.