The Drop -- A Low-Key Downbeat Thriller 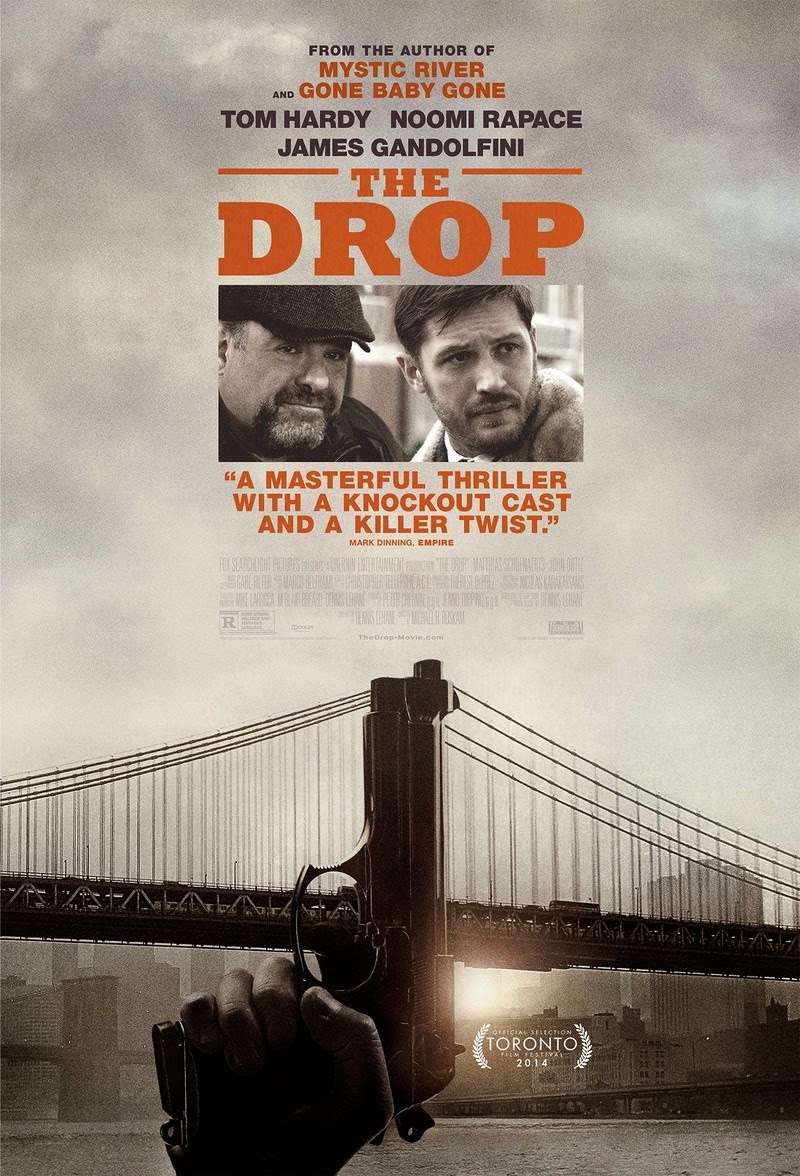 American novelist Dennis Lehane is best known for his mean-streets crime dramas that are set in & around Boston (“Gone Baby Gone”, “Mystic River”). The carefully crafted zinger-laden dialogues, hard-boiled, working-class characters, and the ornate history of the borough are few of Lehane’s trademarks that could even elevate his subdued stories. Belgian director Michael Roskam’s “The Drop” (2014) is based on Lehane’s short story “Animal Rescue” (from his anthology “Boston Noir”). Lehane has written the script, while he has moved the action from his favorite Boston to Brooklyn. Apart from Lehane the movie’s greatest appeal is its cast. “The Drop” is the final film performance for “The Sopranos” fame James Gandolfini.

The movie starts with a rough voice-over, where our protagonist Bob Saginowski (Tom Hardy) explains how various bars around his town are used as ‘drop bars’, where the mob’s illegal earnings are temporarily stashed. On an assigned night, several envelopes full of bills come across the bar throughout the business hours and it’s all stored inside a time-release safe. Bob works as bartender at Cousin Marv’s. Marv (James Gandolfini) – Bob’s real cousin – was once proprietor of the bar and a low-level mob guy. But, due to a mysterious debt he gave up his tavern to the glossy-haired Chechen mafia guys. 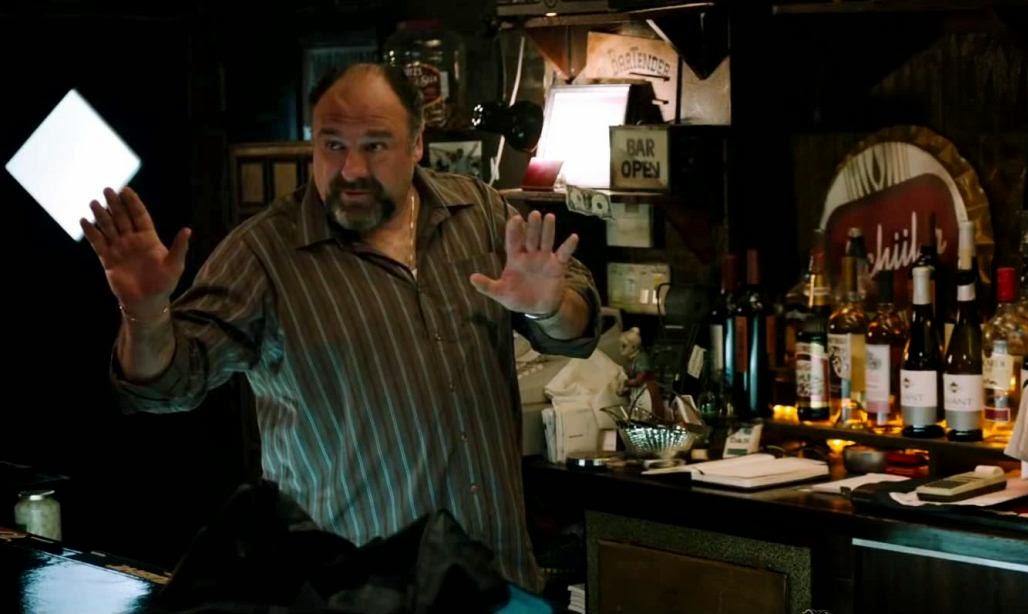 Bob looks like a tough guy who’s gone soft. He follows through the routine without any annoyance; goes to Mass every morning but never takes communion; and doesn’t have much of a life outside the bar. However, everything changes on account of two incidents: one night, the bar gets robbed and the Chechens insist Marv and Bob to find the money soon; and Bob finds a half-dead pit bull puppy inside a trash can, outside the house of Nadia (Noomi Rapace). Nadia, an introvert like Bob helps him to take care of the puppy. Around the same time, a homicidal thug, Eric Deeds (Matthias Schoenaerts) arrives at the doorstep of Bob claiming ownership of both of Nadia and the dog. Gradually, the two story-lines seems to intersect at a point. 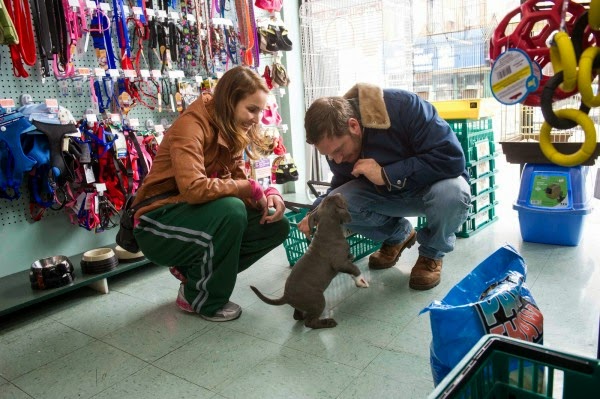 The characters are removed from the center of power, and except for Bob they feel bad for the missed opportunities, at the same time vying for one final play. Anger (Marv) and sheer craziness (Eric Deeds) destroys two of the primary characters, while love (which is represented through a puppy) seems to be the bonding point or salvation for Bob and Nadia. The tenacious detective (John Ortiz) pressing for robbery details seems to be representation of Bob’s conscience, who is constantly at Bob’s tail (talking about the church’s demolition). On the outset, “The Drop” is a simple boy-meets-girl story, but Lehane’s take on crime, punishment, and redemption imbues it with an increasing complexity.

One of the adept things in Lehane’s screenplay is the way he hints at a backstory or character trait without giving us the vivid details. We are hinted at Bob’s past (like he was part of ‘crew’). He wraps up the severed hand as if he has done that all his life. But, he also cares for a stray dog and stands up for intimidated woman. So, we sort of question, how he is going to handle the mess, produced by Marv. This quest makes the movie something more than a routine taut thriller. “The Drop” also suffers from few shortcomings like the sluggish storytelling in the later parts and farfetched coincidences. But, the actors going for deeper emotions transcend some of the flaws. 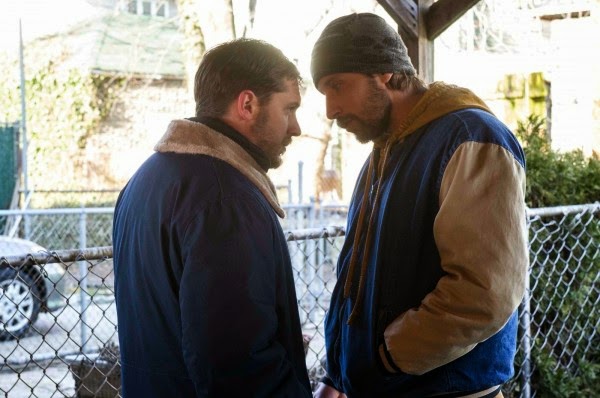 Hardy, as he proved in “Locke”,”Lawless”, is a powerful physical actor who commands the screen (he has already earned comparisons to Gary Oldman). He stays as a quiet force until that menacing climax. Gandolfini is best at playing a wounded bear character, and exhibits his desperation without verbalizing. Schoenaerts is scary, intimidating and pathetic as the neighborhood thug. Director Roskam has treated the material with veneration. He gives the perfect neo-noir feel and is adept at direction, although it feels a little untextured.

“The Drop” (106 minutes) is a low-key crime thriller, blessed with sensitive performances. Although story isn’t entirely new, it’s worth watching for the intense, understated tension that exists from the first shot to last.

The Drop -- IMDb
at January 02, 2015
Email ThisBlogThis!Share to TwitterShare to FacebookShare to Pinterest
Labels: Thriller