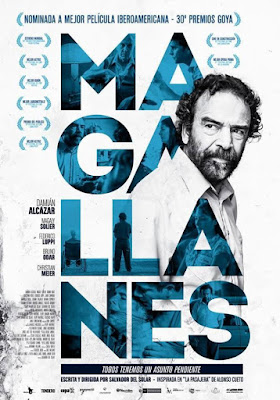 There’s something fascinating about indigenous Peruvian actress Magaly Solier. She has this vacant look, yet if we look closer her character’s inner pain gradually escape through the forced passivity. She made her feature-film debut Claudia Llosa’s “Madeinusa” and received international acclaim for playing the young woman, burdened with a tragic past, in Llosa’s “The Milk of Sorrow”. In the neo-noir/thriller Magallanes (2015), she is once again given the role of a victimized woman. But, Solier conveys this set of profound emotions through her eyes and through little fleeting movements, which makes us to totally invest our emotions. Even when the narrative in Magallanes threatens to lose its complexity, the performances keeps us hooked on.


Peruvian actor Salvador del Solar has made his directorial debut with Magallanes. It is based on 2006 novel by Alonso Cueto (titled ‘Black Butterfly’). The central theme of the story is sins of the father or sins of the past. In the nation’s prolonged period of internal conflict, from the early 1980s to late 1990s (the conflicts didn’t fully recede till date), it is estimated that at least 70,000 people were killed. The armed forces (trained specially by US ‘counter-terrorist’ operations) created many emergency zones in its fight with te guerilla forces, raiding villages of indigenous peasants and killing scores of them. The place named ‘Ayacucho’ plays a vital role in the film. The gruesome events once happened in this place occupy the center of protagonist’s moral crisis. The Peruvian military committed many atrocities and human rights violations in & around Ayacucho. Magallanes (Damian Alcazar) is part of the regiment which participated in such barbarous acts. He  now works as a taxi-cab driver and as a care-taker for his once-powerful colonel (Frederico Lupi), who is afflicted with Alzheimer. Magallanes and his former colonel now live in the capital city Lima. One afternoon, a woman named Celina (Magaly Solier) gets into Magallanes’ taxi and after looking at her in the rear-view mirror, he is visibly tense. She isn’t looking at him, but it is clear that the face he saw in the mirror haunts his conscience. He averts his eyes when the woman gets off at her destination. 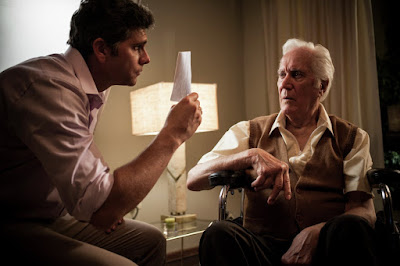 Celina is being scammed by one of those vicious companies that gives false hope to people to make them sell useless anti-aging, beauty products. She runs a salon business and it is clear that she has lost hope in everything. Moreover, Celina is burdened with a large sum of debt. In his den, Magallenes scatters around the old photographs and documents, he had gathered in those days when he was part of colonel's regime . In Ayacucho, when Celina was around 14 years of age, she was kidnapped and kept as a sex slave at the colonel’s barracks for nearly a year. One photograph shows her sadly sitting on the lap of colonel.  Magallanes decides to use this incriminating picture to extract some money from the colonel’s rich lawyer son (Christian Meier). He enlists his sister to blackmail the lawyer on phone. The place for receiving the money is all set. But his simple scheme to get the money brings chaos. Amidst the chaos, the old feelings of guilt takes him to the doorstep of Celina. Magallanes' quest to right the past injustice gets him and her mired in complexities.

The movie works well as a thriller about an amateur blackmailer, trying to get back at the victimizing class. But, director Salvador del Solar merely uses this genre framework to bring us closer to his central intention: to indict the worst treatment unleashed on indigenous people in the past. He uses the personal story of Celina to explore the country’s past and the way subsequent generations’ have failed to come to terms with their patriarchs’ despicable activities. Although Magallanes’ reason for blackmailing seems so simple, Solar turns his motivations ambiguous as the narrative progresses. When his sister asks, “Why this idea now?”, Magallanes replies, “I’m tired of being penniless”. In the later half, this simple desire to attain money is transformed and he looks forward to right a wrong. We would expect the two individuals who were wronged by the colonel to join together in a moral crusade. However, the darkness of the past events is more complex than viewers could expect. Magallanes tells he just followed orders. We could assume the horrors he must have witnessed (or even committed) when he was with the colonel. And, as the man’s eyes expresses a kind of unrequited love for Celina, the abyss of the past deepens. Magallanes’ journey to redemption becomes more complex and it exhibits how much his soul is fractured by the savagery of the past.

Del Solar’s frames keep a sense of unease (DoP Diego Jimenez) as if the brutality of the past will jump out from every street corner. The visuals could have used more subtlety, but the imagery never gets fussy too. The performances are the soul of the narrative. Damian Alcazar brilliantly portrays a character whom we can’t single-mindedly hate or just forgive. He impressively wears an indelible expression of regret. Margary Solier, as I mentioned earlier, is the primary reason to watch this film. At times, Solier’s Celina seems to be catatonic, her expression remaining very hard. It could even be ripped apart as bad acting. But, in a couple of dramatic situation, the way she brings out Celina’s anger and sadness suggests us that the earlier rigid expressions were the result of her, suppressing all those damaging emotions. The greatness of her acting culminates in the film’s most affecting scene, when Celina talks about her anguish in the native Quechua language. Director Del Solar cleverly decides to not insert the subtitles. We don’t know what she says, whilst we can understand what she may have said. The ugly side of history may be kept in the darkness, but the indecipherable words and perceivable emotions will haunt the nation’s conscience forever.

Magallanes (110 minutes) is a gripping study of a man and his country’s moral crisis which is elegantly presented within a thriller framework.