Ixcanul [2015] – A Simple Story told through a Magnificient Film Form 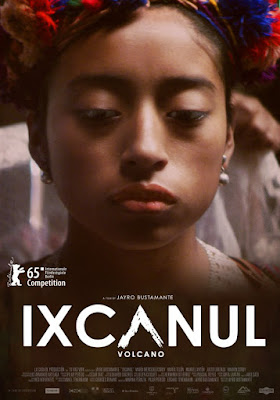 Guatemalan film-maker Jayro Bustamante’s feature-film debut Ixcanul (2015) opens with a close-up shot of 17 year old indigenous girl Maria (Maria Mercedes Coroy). She lives with her parents who are low-level workers in a coffee plantation, situated on the slopes of an active volcano [Ixcanul means volcano in the dialect spoken by the indigenous Kaqchikel people of Mayan community]. Maria has strong eyes, but none of her feelings rises up to the surface of her face. But, you could sense some intense inner force. In that sense, she is pretty much like a volcano waiting to be awakened. Initially, director Bustamante observes the rituals and quotidian life of the impoverished community. The people combine their own spiritual traditions with ideals of Christianity, forming strange form of worship. The community seems to live on a different planet with none of the sophistication of urban atmosphere. There’s no electricity or running water and they have to fend off poisonous snakes in their little corn fields. The lure of American dream takes away the youngsters. In such conditions, the active volcano seems to be the least of disruptive forces for the indigenous community.

Maria and her mother Juana (Maria Telon) catches a pig, pours some rum on its mouth, and locks the pen as it is the time for mating. The nonchalant nature of Maria shows that this is just a routine activity. The pig sequence is preceded by the opening close-up shot of Maria being adorned like a bride. The mother takes the bride-to-be to make offerings to the volcano. Later, the bridegroom’s family arrives to discuss about the upcoming marriage. The husband-to-be Ignacio (Justo Lorenzo) is the coffee plantation’s foreman, who lives in the city and speaks Spanish unlike the indigenous people. The ensuing marriage discussion scene is wonderfully visualized. Maria sits at center of the dinning table, although the cacophony of voices pushes her to the background. Maria’s mother Juana is exactly the opposite when it comes to expressing her feelings. She pretty much ‘sells’ her daughter, pitching the advantage of marrying Maria (she also gives positive sexual promises). All the men in the table feel assured. It is a business deal for these workers who doesn’t have permanent roof above their heads. Only Ignacio’s mother talks about love; she asks whether Maria loves Ignacio. Maria smiles a little and that’s taken as a confirmation.

Gradually, we witness Maria’s desires. She may not have had a thing to say in the dining table. But her body urges her to change things. The things existing and happening around Maria are shown to have link with her. For example, she sees herself in the pig-mating ritual. The scorching emotions make her feel like a volcano. She also rubs her vagina against a tree trunk. It’s such a strange scene which makes you wonder whether it is just to depict the girl’s burgeoning sexuality. Maria dreams of escaping to United States with a reckless young worker Pepe (Marvin Convoy). In order to form a strong bond with Pepe (whom she really loves) so as to take her to the United States, Maria offers herself. When Pepe takes off her virginity the camera hitches close to Maria’s face which is filled more with pain. The pleasure she found while rubbing against the tree trunk is absent. That’s the central irony of the tale at that point: the comfort a land gives couldn’t be given by the humans in Maria’s life. However, it all changes sooner when Maria gets pregnant. Pepe leaves her. Ignacio returns from the city and Maria’s father tells him the truth. Mother Juana incredibly changes; her maternal nature preceding the family’s economic welfare. She protects Maria in myriad ways. Amidst all the accompanied tragedy, the strong love between mother and daughter shines through.

Winner of Silver Bear (at 2015 Berlin Film Festival), Ixcanul is a tale of unbridled maternal love. It elegantly observes the contradiction that forces Juana to succumb to the community’s rules, while also striving to fiercely protect her daughter. The initial scenes of Juana offering her daughter’s body is later substituted with humane scenes of mother shielding the daughter and the life inside her body. The human warmth could be palpably felt in the bathhouse scenes. In fact, the visual compositions of the naked bodies in those scenes perfectly zeroes-in on the underlying love between mother and daughter. Director Bustamante’s framing of the rugged landscape were flawless. Yet the marvelous quality of the film comes from the director’s distinct framing of the bodies and character’s face (Dop Luis Armando Arteaga). It lends an intense emotional weight to the proceedings. Bustamante starts with a fluid visual style, marked by lot of static shots. He gradually builds it to a crescendo and extracts enough tension when situation forces the family to move through the bustling urban roads. While we keep a certain distance in the opening portions, the frenetic camera movements pulls us deep into the action.

Ixcanul has a very familiar story. The script is drained of any big dramatic moments. The writer/director doesn’t want to forcefully dwell on subjects that agonizes the indigenous community. Bustamante grew up in a similar farming community and so he allows the people of community to tell their own story. His view is that of an insider; not of a noble outsider. It allows Bustamante to not establish a contrived message about the oppression of indigenous community. He is intent on providing a window for the viewers to look into a way of life. Even when the narrative turns to address the bureaucratic apathy against the indigenous community, the director doesn’t bring in artificial emotions. A typical melodrama based on the same subject would get closer in the dramatic reveals. Here the camera is hitched at a long distance when Maria’s father tells about his daughter’s pregnancy to Ignacio. In the long shot, the only clear movement is that of a horse stomping its feet, which subtly expresses Ignacio’s state of mind. 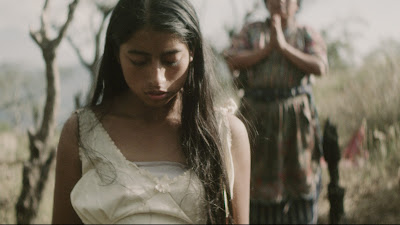 Ixcanul isn’t entirely devoid of a lamenting tone. The beauty is in how it’s expressed formally. Nothing works for the community, as they are caught in cycle of misery and poverty. Neither the volcanic god nor the shamans could bestow a little sense of hope. The charm of the distance land like US casts out Maria, but none of the spells could cast out the snakes defiling the fields. Even the practical solution of chemical repellent for the snakes doesn’t work. Such little elements ponder over the helplessness of the people. And, the venom of a creature in the nature seems to be less poisonous when compared to the venom in the heart of people manipulating the language barriers. Their powerlessness is approached clearly in the third act, unfurling in the tightly framed bureaucratic offices. Director Bustamante takes up a big, national scandal towards the end without a tinge of sensationalism. Since the bond between Juana and Maria is robustly realized through the nuanced film-form, these additional layers are elegantly placed upon it. It would be incorrect to call the imperious presence of Maria Mercedes and Maria Telon as acting performances. Telon as worried mother Juana tears our heart in the ‘truck sequence’. Both the actors playing mother & daughter are theater artists. Maria Mercedes Coroy does street shows, advocating for women’s rights and human rights. She doesn’t bring many emotions to her face. Yet, we are able to feel her inner pain just through the formidable presence.

Ixcanul (91 minutes) is a thoroughly engrossing and beautifully shot film about the unconditional love of a mother. It’s also an artful, sensitive examination of the painful existence of exploited ethnic community.