The Lure [2016] – A Shimmering, Fantastical Tale of Two Young Mermaids/Sirens 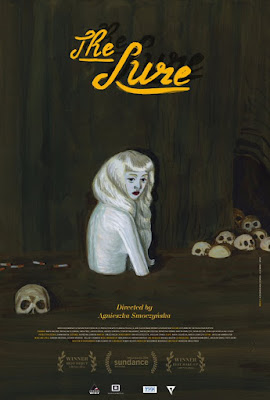 Polish film-maker Agnieszka Smoczynska’s part-humorous & part-grisly feature-film debut The Lure (aka Corki Dancingu) is an entertaining mish-mash of genre and mythology. It is a rock opera about two young mermaid sisters who lures as well as are lured. The rare kind of sisters named Golden (Michalina Olszanska) and Silver (Marta Mazurek) have the characteristics of both innocent Mermaids and devious Sirens (from Greek mythology). The film opens with the trio of musicians practicing on a shore. The sisters, their head bobbing up the river water, sing a song entrancing the young man in the music family. “Help us come ashore, nothing to fear, we won’t eat you my dear” goes the song. Soon, a burlesque club owner curiously looks at the sisters who stand nude in the back room of his night club in Warsaw. ‘Like a barbie doll’ says the man examining them when observing the smooth surface where the human genitals would be. He pours water on them and their lower part of the body transforms into fishy tails. The sisters decide to set aside their inclination to eat men and take in the attractive opportunity to use their unique singing talents.

If you aren’t so engaged upon hearing the aforementioned plot elements (unfurling in the first 10-15 minutes) of The Lure, then you won’t probably like the movie. The narrative only gets more warped, slippery, yet somehow it's weirdly engaging with a catchy beat to hold everything. Although there’s no mention of the year, the setting persuasively evokes 1980s Poland, where such dance clubs really existed. The mermaid sisters are lured by the overwhelming opportunities the club life proposes. They have nearly ditched their original plan to swim to America and Silver falls in love with Mietek (Jakub Gierszal), the bass-player of aforementioned oddball musician family. Golden and Silver accompany key singer/family matriarch Krysia (Kinga Preis) to belt out enthusiastic songs, bringing in a lot of new fans. As a part of their act, the sisters jump nude into a big bowl of water, revealing their fishy tails. Although the new club life represents a kind of liberation, there’s a conflicting repressive atmosphere too. Before long the narrative turns to body horror & reinterpretation of ‘The Little Mermaid’, with the musical numbers metamorphose from punk rock to dreamy, achingly emotional ones, reflecting the sisters’ conflicted feelings. 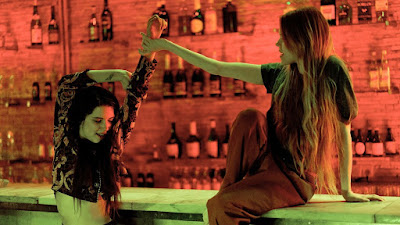 The Lure, written by Hardkor Disco and Robert Bolesto, is not much of an allegorical presentation of the 80s Warsaw. Director Smoczynska spent a lot of time as a child in dance clubs run by her mother. Writer Bolesto was interested in the story about young girls working on dance bars of the 80s. However, bona fide musical numbers plus fair share of old mythologies drives in the narrative than the 80s Warsaw, afflicted by Communist era. There are few undertones like the mention of militia or secret service, but the historical backdrop isn’t explored even in superficial terms. It’s actually a good thing because Smoczynska wants her film to be wildly entertaining and frankly approach the ebb and flow of two young woman’s emotions. The more stress on historical backdrop would have only escalated the already erratic nature of the script. Smoczynska does a pretty good job for a first time director, exhibiting high energy in some of the grandstanding pop tunes.

There are quite a few drawbacks with the script, which crams in all the interesting ideas even though some has no place in the narrative. There’s the confusion on what to leave out and what to jam into the story. It leads to an overly uneven tone. I mean the script stumbles a bit to choose a direction, just like the baffled young mermaids with bruised innocence. Nevertheless, the aesthetic choices kept me engaged. Director Smoczynska wonderfully dwells on the underlying emotional horror of the story. Even when everything becomes predictable in the end, the director finely explores the basic fear accompanying love and sacrifice: the idea that it won’t be recognized or reciprocated. I liked how the director uses the girls’ growing sexuality. Instead of just evoking eroticism through their constant body-shifting capabilities, Smoczynska also taps into the girls’ inner feeling of anxiety and yearning that accompanies with sexual awakening. 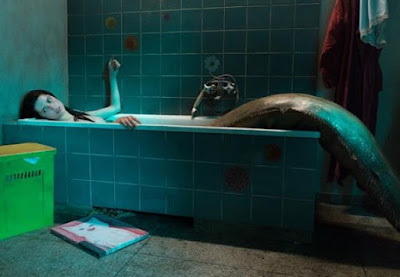 Of course, The Lure could face the complaint for not being more profound in its exploration of the said emotional themes. But, I feel that within the limited framework, the director has effectively studied the emotional undercurrents. The musical numbers aren’t the perfectly constructed, ambitious ones, but they are catchy and the lyrics wondrously reflect the emotions burning within. Apart from the energetic club songs, I loved the number at surgical table (opens with a grisly top-angle shot) as Silver opts to give up her fishy, lower body part. The casting of Olszanska and Mazurek is a big plus to the film. They are funny enough in acting out the campy elements and enormously poignant during the final moments. Michalina Olszanska recently gave a powerful performance as Czech mass-murdering woman in I, Olga Hepnarova. She has this wonderful eyes and smile, which alternately reflects a child-like as well as craftily mature nature. As the mermaid sisters they bring a spark, even to the sequences that aren’t so interesting.

The mermaid myth depicted in The Lure aka Corki Dancingu (90 minutes) is bizarre, wacky, and wild in a good sense. It both follows the genre conventions of horror, musical genre and also deconstructs it with good results. It’s for those seeking cult cinemas or an erratically different movie.