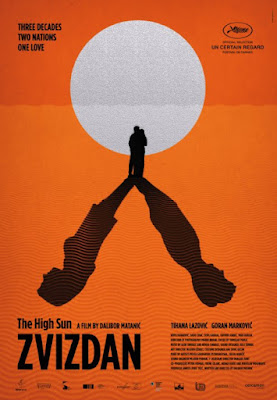 Croatian film-maker Dalibor Matanic made his directorial debut at the age of 25 with The Cashier Wants to go to the Seaside (2000), a darkly comic romance/drama. Unlike the majority of Balkan films made after the disintegration of Yugoslavia (in the early 1990s), Matanic’s works concentrates less on the politics and more on the themes of humanism. In his second film Fine Dead Girls, Matanic used acerbic characters, residing in a small apartment complex to weave a microcosm of the post-independence, recession-era Croatia. Despite cynicism and disturbing scenes of violence, Matanic’s central characters overcome their cursed fate through unbridled display of compassion and hope. The director’s eighth & recent film The High Sun aka Zvizdan (2015) is much broader in scope (both in terms of budget and theme) and he once again uses universal themes of love, hate, and passion to explore the fractured history of his nation.

The High Sun, winner of Jury Award at Un Certain Regard section of the Cannes Film Festival, follows the impact of ethnic hatred on the romantic relationship of inter-ethnic couples. The film tells three different stories, set in three different decades of two neighboring villages – one Serbian and other Croatian. The catch is that the same two lead actors play the different romantic leads in the stories set in the years 1991, 2001, and 2011. In the prewar story (in 1991), we see young Jelena (Goran Markovic) and Ivan (Tihana Lazovic) enjoying their idyllic summer day, cavorting on the edge of a beautiful lake. They are rebellious and so much in love that they have decided to leave their respective villages the next day and settle in Zagareb city. The Romeo and Juliet witnesses the first seeds of chaos as line of military jeeps move over the lush fields. Jelena’s elder brother Sasha is drafted to army and he seethes with rage for his sister choosing a guy ‘from the other side’. Sasha’s hate shines through Jelena and Ivan’s prism of love leading to a shocking end.

In the second episode (in 2001), the war is already over and a moody girl Natasa returns with her mother to war-torn family home, which is now in the enemy territory. The empty place reeks with the memory of Natasa’s brother who is killed in the war. Natasa withdraws herself into a shell as the mother tries to rebuild the place and life. A young repairmen Ante of the ‘other’ ethnic community is brought in to rebuild. There seems to be no chance for a romance between the young ones as Natasa can’t let go of the fact that Ante’s people were responsible for the death of her beloved brother. However, she learns how others have also suffered and cursed to be in a permanent state of despair. A reconciliation of sorts happens, yet the poisonous past hinders the blossoming of love. In the third episode (in 2011), university student Luka arrives for a party at his hometown. The good-old days seems to have returned to the town, yet the unhealed wounds of the past opens up when Luka goes to meet Marika, the lover whom he neglected. Luka hopes to find redemption and escape from the tragedy of the past. 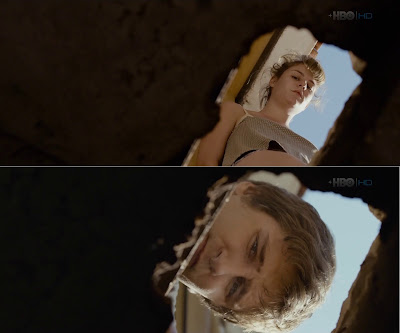 The three episodes in The High Sun have a very simple and predictable narrative arc. Some may wonder if the film would have been more captivating with tight editing (the film runs close to 2 hours). But the slow-burning approach worked for me, thanks to interesting visual choices of director Dalibor Matanic. Matanic’s mature nuanced vision and attention to small details makes up for the easily foreseeable story arc.  Cinematographer Marko Brdar brilliantly captures the nature; he especially excels in arresting the sunlight within the frames. Matanic goes for Bressonian close-ups (of legs, hands – to portray the emotional unrest) than the traditional close-ups of the face. The magnificent landscape itself becomes one of the characters as it reflects the humans’ inner wounds. The paradisiacal Lake present in the three episodes of the film is amazingly showcased. A dip in the lake in the respective romantic tales provides a purifying experience. The other recurring visual motif in the film is the silent witness. In fact, silent witnesses are always present in Matanic’s films. In The High Sun, a watchful dog and a compassionate dad are the silent witnesses. They are just like us with no control over the events, yet forced to watch everything. Doors, gravestones, and dark tunnel-like passages are the other recurring visual motifs. These motifs either signals the freedom of an individual from his/her own bruised self or their inability to escape the dark past.

Director Matanic’s visual flair stands out in three sequences: the aggression and tension towards the end of first episode; the raw sexual tension in the second; and the wild techno scene in the third. These three sequences are astoundingly staged as they become a movie within a movie. Take the fate of trumpet playing protagonist Ivan in the first story. The music he plays by standing in the edge of enemy territory becomes the call for his lover. And, when the music finally stops, Matanic focuses on the dropped-down trumpet as we now only hear the cries. This simple sequence opens with beauty and ends in chaos. If you contemplate on a sequence that happens in the third episode (the one I mentioned above), the opposite happens: moving from chaos to moment of clarity (near the lake). Of course, the raw sex scene was so memorable; because it closely captures the character’s (Natasa’s) unbridled lust and the emptiness and emotional pain that follow up.  In spite of the brilliant film form, it wouldn’t have been powerful if not for the challenging lead performances from Markovic and Lazovic. They add distinct character traits to their three respective young roles. In an interview, Mr. Matanic was asked, ‘why he used same actors for each story?’, to which he replied, “By repeating familiar faces through stories I wanted to create a subconscious effect in the audience such that they would be aware of the possibility of history repeating itself and that all the characters are in fact one body at the end – they are one love, no sexes, one hope.” He and his actors seem to have perfectly succeeded in conveying that effect.

The High Sun aka Zvizdan (122 minutes) reflects on the collective wounds of violence and hatred in a community through three simple stories of love. The stunning, interpretative visual language does an oxymoronic blend of passionate and traumatic emotions [director Dalibor Matanic has said that this film is the first part in his ‘Trilogy of the Sun’].