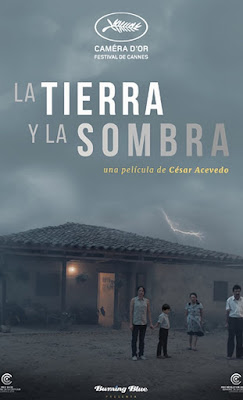 The ruthless dimension of neoliberalism is the main culprit for the social problems faced by a Colombian family of four in Cesar Augusto Acevedo’s nuanced drama Land and Shade (2015, La Tierra y la Sombra). The land is scarred, covered with dust and soot due to the sugar industry’s controlled fires of the near-by cane fields. People are either displaced or succumb to prevailing diseases and poverty. The fragility of the powerless is plainly visible in the faces of people working on the charred fields with machetes. With no identity, history and sometimes even a family to hold onto, all these people hope for is the promised economic progress. But the overwhelming power leaves the poor people to be choked out in their own home. Land and Shade has a thread-bare narrative, which focuses on deepest human feelings than making a overt social message. The evocative static shots, punctuated by slow camera movements may keep many in a languid mood, while other patient viewers may experience the film’s nuanced quality of getting under one’s skin.

Director Cesar Acevedo confides that Robert Bresson and Andrei Tarkovsky are his favorite film-makers. It shows in the director’s film form, which is intent on capturing the inner passions underlying beyond the characters’ surface emotions. Acevedo observes space and time, the relation between bodies and emotions, and even the smallest of gestures to dig deep into the hostile capitalistic forces. The movie opens with a static, long shot as we see an elderly man named Alfonso (Haimer Leal) walking down a dusty road confined in-between lush cane fields. A giant truck attached with four big containers slowly comes up the road. Alfonso nestles himself inside the fields as the truck thunderously passes him, raking up huge clouds of dust. The bleak grey has long become the shade of this beautiful land. Alfonso has returned to his family in rural Colombia after a 17 year absence. He is there to look after his adult son Gerardo (Edison Raigosa), who has chronic respiratory problems from having worked on the sugar plantations. Gerardo’s wife Esperanza (Marleyda Soto) and Alfonso’s estranged, resentful wife Alicia (Hilda Ruiz) take the job in the fields. 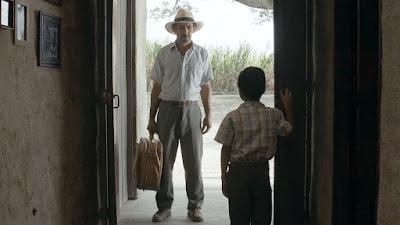 The non-unionized work forces wastes away their health in the burned-out cane fields for a pittance. The poor family which can’t afford a doctor for Gerardo’s ailment could only close the windows to keep off air pollution (soot rain down from nearby burn-offs in the fields). Hence, Gerardo rests in room, enshrouded by darkness, indicating the inevitability of his fate. The sticky paws of giant industries hold the land in a way to shape the disintegration of family unit. Even the domestic interaction of family members often rests on the discussion of unceasing social troubles. The only person who still withholds the wonder for nature is Alfonso’s six year old grandson Manuel (Jose Felipe Cardenas). In the placid days, the grandpa and grandson build feeding table under a giant tree nearby, for the birds. But, death and agony always broods over the horizon. Death materializes in the way Gerardo is covered in white blanket when he lies on the backside of a small truck to go the hospital; pain reverberates in the frames, when the two women workers are ruthlessly exploited for paltry sum. What do these people do in such a wretched atmosphere? They keep open their hearts and just keep on going.

Director Cesar Acevedo and cinematographer Mateo Guzman, both working on their first film, have done a marvelous job in shooting the interior scenes with low lighting. In one scene, Alfonso opens a window when sitting for lunch with his grandson. The boy insists to close the window as no pollution can enter their little nest. The family’s survival depends on this wilful confinement. The majority of static shots open with characters already positioned in the frames indicating their confined status. In one sequence, there is the rare free-flowing camera movement, which actually turns out to be a dream sequence. Even in the outdoor shots, warm-palette coats the frames insinuating the dangers lying beyond their family unit. The birds (& the horse in dream) which symbolizes the freedom or freewill are never seen (only their soulful voices are heard). The long takes of Alfonso cleaning the dusty leaves and sweeping off the ash surrounding the green plants says a lot about the collateral damages of exploiting the land. 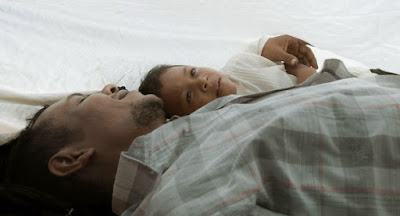 Acevedo’s storytelling method often dwells on the physical and emotional proximity of the characters. He finds tenderness and deep love in the smallest of gestures. Alfonso shielding Manuel and his ice cream from the dust; Gerardo and Manuel hugging inside the white blanket while traveling on the backside of truck; or the shot of estranged old couples jointly cleaning the body of their son – these smallest of things withholds immense power to straightly speak to our hearts. Amidst all the cruel situations, the simple movements to showcase love are captivating to look at. When Alfonso and his Alicia attain proximity they seem to attain it through shared love and pain. It may seem a very simple thing, yet it looked so beautiful to me. At times, the visuals do seem rigidly controlled, spreading a little disconnection from totally absorbing their suffering. Nevertheless, those are minor flaws in what could be called as a magnificent debut feature (Acevedo won Camera d’Or at Cannes, for best directorial debut). It is also understandable on why the director didn’t delve deeply into the story of cane cutters (played by real life workers). The intention was to just tell the simple story of a fragile family (the potent political statement could be saved for his next film.

Land and Shade (97 minutes) is a glacially-paced poignant drama about the emotional and physical destruction of a vulnerable family unit. The muted and cumulative power of its visuals contemplates a lot about the belligerency of capitalism than any sharp statements.