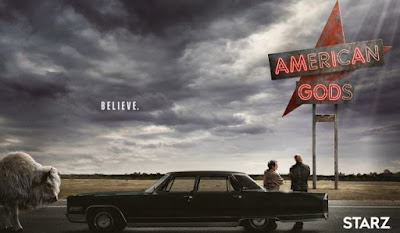 Which came first: God or the belief/faith in god? It wouldn’t be paradoxical question for many. Those who believe in God as creator, as the one whose existence preceded cosmos, may assure that God is first and later belief was bestowed. While others may say belief system created gods with a healthy dose of humanity and irrationality. Well, the former so-called believers’ stories of creator God is a bit monotonous and not broadly imaginative. The later alleged thinkers’ version of god seems pragmatic, although its utter lack of imagination seems bit boring too. What if there’s an unbelievable middle point to this starkly polarizing views? What if God the creator and Belief the creator of god are just like two sides of a coin, both essential for well-rounded human experience? That does sound ludicrous and far-fetched, but author Neil Gaiman transcended such an idea to make us describe his novel ‘American Gods’ with lot of superlative adjectives. Released in 2001, renowned fantasy writer Gaiman’s American Gods, at its core, is the story of American people – slaves and migrants – who all brought their individual gods to the New World. In Gaiman’s universe, gods exist in blood and flesh, basking in the well-spring of belief. In America, the land of incohesive culture, deities rule over or keel over based on the ever-changing American people’s paradigm of worship.

Neil Gaiman’s epic novel (won both Hugo and Bram Stoker awards) boasts the unadulterated fun of American hard-boiled fiction. It’s a part road novel; perfect reinterpretation of mythologies; and an informal ethnography. A decade after the book's release, talks for small-screen adaptation began in HBO. Starz eventually picked up the show and roped in Bryan Fuller (Hannibal) and veteran producer Michael Green for the show-runner title (Gaiman was given executive producer title). Nevertheless, American Gods is not an easy book to adapt. For one, there is the question of whether the visuals could do justice to Gaiman’s powerful, vivid description. Then, the novel that takes many detours, which in TV adaptation may run into the danger of getting simplified or smoothed over in exchange for cohesive narrative. After watching the eight episodes of season 1, I must confide that Mr. Fuller and Mr. Green have finely expanded and enhanced Mr.Gaiman’s idiosyncratic vision. The series does have a shaky start, which may bother both those familiar and not familiar with the source novel. The initial episodes were somehow plagued with terrible pacing and unnecessary excesses. However, gradually the world-building and character-building aspects manage to go deep, staying true to Gaiman’s vision. 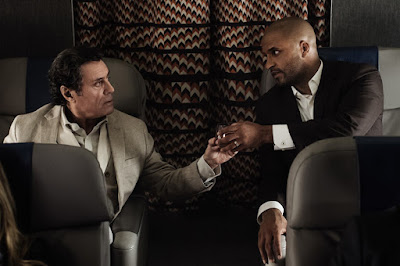 The action centers on Shadow Moon (Ricky Whittle), a brawny African-American, who’s approaching the last week of his prison sentence for robbery. He feels that something’s amiss and confides the same to his wife Laura Moon (Emily Browning) over the phone, who is waiting for him for three years. Shadow is released earlier than anticipated (in the next day). Alas, wife Laura has died in an car accident. In his journey to attend wife’s funeral, Shadow meets a charming con-man (Ian MacShane) who asks Shadow to call him Mr. Wednesday (since the particular day is Wednesday) and offers to be his bodyguard. To his dismay, Shadow learns that Laura was pursuing an affair with her best friend’s husband Robbie, who was also killed in the accident. Since the prospect of going home becomes meaningless, Shadow pays visit to Laura’s grave, drops a gold coin which was given to him by a belligerent guy (Wednesday's accomplice) named Mad Sweeney (Pablo Schreiber), and decides to tag along Mr. Wednesday. Shadow doesn’t know it yet, but the coin he dropped instills life into the dead Laura and also indirectly saves his own life.

Mr. Wednesday travels into the heart of Americana, meeting other mysterious old people, to ask for their support in upcoming war. ‘Who are these people and what war?’, Shadow is as much kept in the dark as the viewers. Nevertheless, he goes with the flow and chooses to do right by his boss. In the beginning of each episode, we are treated to workings of each isolated gods, doing their own things: there’s Bilquis (Yetide Badaki), a goddess of love whose divine physical features makes the sexual partners to worship her, while she hungrily absorbs their whole bodies inside her vagina; Anubis (Chris Obi), the god who owns funeral parlor and also serves as conduit to send dead souls into other realms; Anansi aka Mr. Nancy (Orlando Jones), a tailor and a trickster who propels humans to engage in acts of chaos; and there’s many versions of Jesus Christ, including the Mexican Jesus Christ who arrives illegally through the border. Mr. Wednesday himself is a forgotten old God, who has become tired of his hustling job. He is determined to take the fight to the ever-cherished, highly seductive New Gods: Media (Gillian Anderson), Tech Boy – god of internet (Bruce Langley), and Mr. World – god of finance (Crispin Glover). Mr. Wednesday cajoles old gods to join his side before the inevitable carnage commences. And, of course Shadow Moon plays a significant role in this conflict (although it doesn’t come out fully clear in this season).

The big question concerning the book adaptation is how much of Gaiman’s wildly imaginative and disturbing vision are the show creators going to sanitize or simplify? Even if they stayed true to Gaiman’s vision, wouldn't it lose the magic while transforming onto screen? Fuller and Green’s imagery and visual effects clearly casts away our doubts. There’s considerable changes between the way Technical Boy is visualized in the book and series, but this new version looks fitting for the current attention-deficient social-media era. The same goes for Media, who mesmerizingly cloaks herself in the attires of Marilyn Monroe, David Bowie, etc. Moreover, the clash between alternate reality and Shadow’s reality is saturated in an elegant manner. Similar to the book, the series is definitely not for the squeamish. The opening segment of the first episode involving Viking explorers sets the benchmark for the show’s spectrum of violence. With the introduction of each God, the scope of graphic violence widens. Much of the bloody carnage is densely concentrated within the first three episodes. These are also the episodes I found to be less interesting and may be too erratic than the following five episodes. The actors, especially Ian MacShane and Peter Stormare as skull-bashing Czech god Czernobog, does showcase enough charisma to keep things moving in these earlier episodes. Ricky Whittle’s stoicism and MacShane’s protracted theatrics perfectly compliment each other. From the fourth episode onwards, grand set-pieces pave way to profound meditation on the ancient and modern traditions of life. Creators Fuller and Green’s ‘show-not-tell’ approach also sets out to broaden the characters’ emotional depth.

Books can easily get away with rougher edges. The same can’t be said for screen adaptations. Consequently, some of the novel’s character arcs are sensibly expanded. For example, Salim’s moving journey in search of NY taxi driver who happens to be a djinn. What’s more interesting of the Gaiman-approved expansions and updates is the confrontation between dead Laura and Mad Sweeney aka Leprechaun. Furthermore, Fuller & Green casts Emily Browning to play Essie MacGowan too, and it allows us draw parallels between the temperaments of both Laura and Essie. The origin story chronicling Laura and Shadow’s relationship (in 4th episode) leads to the series’ formally audacious episode. Emily Browning profoundly conveys Laura’s indifference, dissatisfaction, and boredom despite her love for Shadow (later, the way she manipulates Robbie with a teasing question ‘Do You?’ was absolutely superb). Bilquis’ story too goes over a convincing narrative arc, connecting the incessant crisis in the region – from 1979 Iranian Revolution to ISIS invasion – as a fatal blow to the womanhood. In the book, Bilquis is a prostitute working the streets. Here, she interestingly rejuvenates herself through dating app. Further adding to the list of intriguing new inclusions is the creation of Vulcan, the god of fire. The form of sacrifice given to the Vulcan god and the visualization of a gun-loving town comes straight from one of author Gaiman’s travel experiences through the mining towns in & around Virginia.

American Gods isn't much about the invasive nature of New Gods or it couldn’t be declared as a simple battle between good vs evil. It’s a commentary on America itself; the land of milk and honey for some and a place as -- Anansi says -- where people ‘get fucked’. The mere mouthing of the word ‘America’ weaves a myth in the minds of those who utter it. The alleged myth is as flawed as the different kinds of people existed or exists in the land. Mr. Wednesday says, ‘no one is American, not originally’. Some came to America much before the people who called it ‘New World’. Some came unwillingly as slaves. But everyone came from somewhere else. What they brought with themselves is rich tapestry of cultures and ancient stories. Behind every god’s origin in American Gods lie the experiences of immigrants and slaves; workers and aristocrats. This impeccably reflects in the tale of Essie MacGowan (in 7th episode). Essie the daughter of poor, Irish sailor after years of hardships finds peaceful life in Virginia. The generation of people, she and the hard-working immigrants like her, spawned may now call themselves as red-blooded, true citizens of America, constantly persuaded by prejudiced thoughts. But this ethnic group that has forgotten or done over with its ancestry has migrated to America like other ethnically different residents of America.

Most importantly, American Gods doesn’t treat irrationality as the calamitous aspect of human existence. As Wednesday says ‘an act of love is irrational’. In fact, everything that attracted people to the ‘land of home and brave’ doesn’t have strongest base of reason. The rebellions of slaves, the modern-day Mexican immigrants’ hope for better life seems irrational and meaningless. But growth isn’t always possible with picture-perfect rational dreams. Sometime mad obsession and unreasonable behavior may uphold our survival; or to the expansion of knowledge. May be we always don’t have the precise words to explain the things we do in the name of love and hope. May be in this vacuum of words breeds the unmitigated belief and leads to the birth of gods. Of course, one may believe more in science than in the ridiculous dogma of religions. But the important thing is ‘to believe’. In this era of single dominant culture, information abundance and emotional hunger, it’s a must to cling to one’s humanity and beliefs in order to rightful shape the world.

American Gods is the tale of mythological gods & tech-age deities wandering around modern-day America which does full justice to author Neil Gaiman’s singular vision. The series' earlier episodes demands little patience, but once the setup is realized, it puts forth a thoroughly immersive experience. It makes for a succinct allegory about migration, belief and modern life.

I tried to read that novel a number of times but failed. It simply failed to enchant me.