Their Finest [2016] – A Beguiling WWII Tale about Power of Cinema 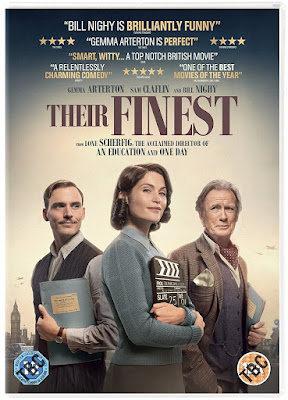 During 1940 and 1941, German air forces (Luftwaffe) carried massive air offensive attacks, targeting United Kingdom’s cities and industries. The mass bombing was referred by British Press as ‘Blitzkrieg’ or ‘Blitz’. More than million houses were damaged in the bombing and at least 40,000 civilians died (half of them in London). With most of the young men fighting in the war, the British government set to amplify the propaganda to justify the fight against fascist force and also keep the spirits up of exhausted citizens. Both the Allied forces and Axis Powers rapidly produced propaganda films to strengthen the public opinion. In Britain, propaganda activities were carried out by Ministry of Information whose primary duty was to observe public mood and concoct uplifting wartime news coverage. Moreover, the World War II made plenty of jobs available for women and elderly people which naturally couldn’t be found during peace time. By the early 1940s, women played a vital role both in the home-front and battlefield. Danish film-maker Lone Scherfig’s Their Finest (2016) is set in blitz-ravaged London and revolves around a smart young woman who does her bit to instill authenticity and optimism into the tales of patriotism.

The chipper Welsh woman Catrin (Gemma Arterton) has moved to London with her artist boyfriend Ellis (Jack Huston). They desire to carve out a life for themselves, but there’s hardly steady income to even pay the rent. Catrin responds to an ad from Ministry of Information. She has to write ‘informationals’ for short public announcements that’s projected before the screening of feature film (information like how to properly hide before bombing). However, she soon gets a new gig. It looks like secretarial job and the manager tells her that she can’t be paid as much as men. Nevertheless, it’s a screenwriting job. To be precise, Catrin has been employed to write ‘slop’ – slang for ‘girl talk’ or ‘women’s dialogue’. The Ministry has advised the studio heads and screenwriters to hunt for an authentic and positive story to boost the public morale. A brief news report about twin sisters who took their small fishing boat to Dunkirk to rescue British soldiers engages studio’s attention. Catrin visits the twin sisters and finds out that their story is far from being inspirational. 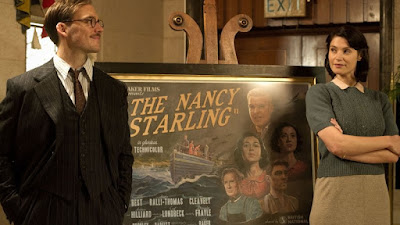 Similar to the quote, “When forced to pick between truth and legend, print the legend”, Catrin decides to manipulate the true story to get a green-light from the studio and Ministry. Since the central characters are women, Catrin thinks that there’s ample opportunity to prove her writing skills. As the studio takes the story to pre-production phase, the frumpy, 30-something sisters are turned to 21 year olds. Moreover, fictional love interests and comedic-reliefs are mixed into the material. Catrin works under head writer Tom Buckley (Sam Claflin), a young man who is considered to be more worthy behind a typewriter than in the battlefield. There’s some friction between Buckley and Catrin since Catrin wants the twin sisters to be more than the ‘damsels in distress’. Nevertheless, their professional relationship is one of mutual respect. They fish out a screenplay called ‘The Nancy Starling’ (named after the sisters’ boat) and join the actors, shooting in a coast of Norfolk, far away from the threat of bombing. Furthermore, Catrin and Buckley’s script attracts enough attention from War Ministry that they command the movie-makers to include a ‘call-for-arms’ message for United States (which was then taking a neutral stance in the war). The screenwriters are forced to write a character for Yank war hero & hopeless actor Carl Lundbeck (Jake Lacy). 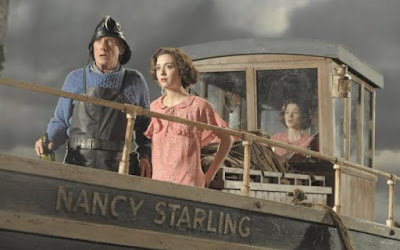 Their Finest is based on Lissa Evans’ 2009 novel (titled ‘Their Finest Hour and a Half’) and adapted to screen by writer Gaby Chiappe. The novel has drawn out characters and incidents from real-life stories (for example the ambitious producer Mr. Baker played by Henry Goodman is based on famous British independent film-maker Alexander Korda). Lissa Evans’ novel seems the right material to make transition from page to screen due to its meta nature – we witness the heartwarming, sentimental bits of the film made within the film. The much interesting portions of 'Their Finest' involves the scenes of writing and filming The Nancy Starling. Catrin resolutely tries to make the movie to be little more than a mere propaganda feature.  We gain some insights on the laughable conventions of propaganda film-making. Although 'Their Finest' boast lot of familiarities and certain uninteresting elements (for eg, the annoyingly predictable relationship arc between Catrin and Ellis), the zippy pace in the later-half and the union between cynical Buckley and wide-eyed Catrin keeps things very engaging. 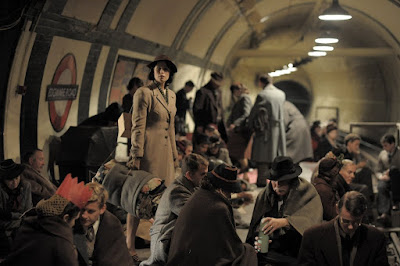 The film isn’t definitely good enough to be compared with ‘Day for Night’, but it doesn’t treat cinema as the flashiest form of illusion. Even though the intention is to provide escapist entertainment for war-afflicted people, the professionals involved on and off the screen make it more than a piece of visual document. By the time film ends, it touches viewers on a primal level and its themes surpass the wartime context. Lone Schrefig’s direction rarely ventures into sentimentality. Her impeccable visual language for the ‘film-within-the-film’ gives a nostalgic rush of fine old-fashioned films. Schrefig also does a commendable job in including black-and-white stock or archival footage. This happens to be Lone Schrefig’s first ensemble film. She made her name as Dogme 95 director and later made character dramas (with limited cast) like An Education & One Day. She incredibly rises up to the technical challenges. Furthermore, she does a good job in directing some scenes with many characters, bringing up all the minute details.

Most importantly, director Schrefig doesn’t allow the audience to forget the agonies of war. There’s a brilliant scene after bomb go off few feet from Catrin. She walks through the rubble and screams after discovering body parts, which happens to be mannequins. Her relief, however, is immediately replaced with revulsion, since she discovers that not all of the dismembered limbs come from mannequins. Almost all of the crew members are haunted by the loss of their loved ones to the war. And, director Schrefig doesn’t try to undermine the real pains of war by exaggerating the movie people’s sacrifices. The feminist subtext does bring in few on-the-nose messages, not that it’s totally unwelcomed. Rachel Sterling’s stern government liaison character (dressed in Marlene Dietrich three-piece suits) stands as counterpoint to assumption that women were of limited use in men’s work (including film-making business). Catrin Cole is most definitely one of breakthrough roles in Gemma Arterton’s career. As usual, she radiates vigor and also perfectly plays up the determination of writer. She doesn’t add any extra haughty layers to the character for upholding the feminist agenda purposes. The relationship trajectory between Catrin and Buckley is easily predictable, yet Claflin’s tenacious demeanor and repressed longing is palpable. Bill Nighy gives a scene-stealing comic performance as the aging, washed-up star Ambrose Hillard. Nighy’s scenes give the feeling of watching a spirited backstage comedy.

Despite a few uncomplicated and predictable narrative turns, Their Finest (115 minutes) provides an engrossing movie experience, thanks to balanced direction from Lone Schrefig and charming central turn from Gemma Arterton. Eventually, it works as a touching tribute to cinema and working women.