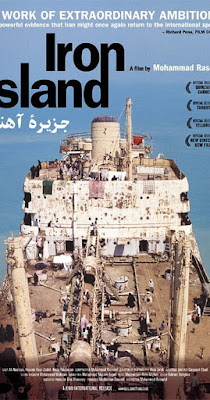 A hulking mass of weathered oil tanker stands like a lone figure in the middle of the sea. From golden sunsets to sapphire-colored sea, the environment changes throughout day and night, emitting different shades of natural beauty. But the impoverished inhabitants who dwell inside this abandoned oil tanker lead a monotonous life, filled with poverty, punishment, and oppression. The deftly polarizing, ironical setting is the foremost interesting aspect of Iranian film-maker Mohammad Rasoulof’s second feature-film Iron Island (Jazireh ahani, 2005). Barring few scenes unfolding in the arid landscape, the majority of narrative takes place inside a decommissioned oil tanker, resting off the Persian Gulf Coast. Despite such a narrow focus for a narrative set-up, director Rasoulof gradually introduces us to wider and rich social tapestry of subjects living inside the rusty ship so that the ‘iron island’ becomes a microcosm of parochial nation-states. Iron Island could be viewed as political allegory about the tensions in Iran’s treatment of minorities (Sunni Arabs) and its destitute population. However, Mohammad Rasoulof avoids heightened drama for humanist observation to transcend the narrative into a potent allegory for the corruptible nature of absolute power.

The film opens in a dark cavity of the old ship as a young man named Ahmad (Hossein Farzi-Zadeh) carries a love letter to a young girl’s tiny living quarters. Next day, when the ship’s benevolent Dictator Captain Nemat (Ali Nassirian) –a old man with piercing eyes and gray mustache -- boards the ship (from his motorboat), he sees Ahmad and the girl’s brother fighting off each other. The Captain warns Ahmad to forget the girl and that he is an unworthy suitor. Later, the Captain brings a new family to the ship and introduces them (& viewers) to the rich social life flowing within the rust-bucket of a ship. There’s make-shift apartment blocks, workstations for boys and men to salvage the metallic parts and oil from the ship, a small classroom whose resident schoolteacher is convinced that the ship is slowly sinking. At every turn, Nemat is stopped by the residents demanding flour, medicine or to take care of the plumbing and electrical problems. The Captain smoothly speaks in different set of dialectics, noting down all the expenses in his account book. He sees a silver-lining in everything, partly because he has to hide the immediate chaos waiting for these poor residents. The tanker’s owner has sold the ship, which means that the people have to leave the floating island. It’s only a matter of time before their struggle for survival turns much bleaker. 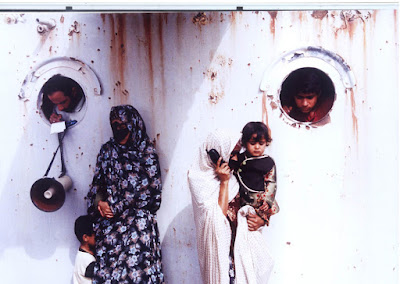 In March 2010, Jafar Panahi, Mohammad Rasoulof and 17 other Iranian directors were arrested for allegedly making a film in support of pro-reform Green Movement. In December the same year, the two film-makers were sentenced to six years in prison and awarded 20 year film-making ban (including a ban on talking to foreign press and travel ban). After the international outcry, the Iranian authorities lessened their sentences, although the film-makers’ activities were closely scrutinized. Mohammad Rasoulof may not be an instantly recognizable name among cinephiles compared with Mohsen Makhmalbaf or Panahi. But he is definitely a great Iranian film-maker, who profoundly deals with sociopolitical crisis, plaguing the contemporary Muslim world or the so-called third world countries. Rasoulof is adept at mixing his allegories with a humanist narrative so that it easily passes off the establishment’s censors and remains less controversial. After a brief period of exile, Mr. Rasoulof returned back to Iran, fervently dealing with social themes by using a subdued, lyrical visual language (his 2013 film Manuscripts Don’t Burn is a excellent slow-burn political drama; the director's latest film Dregs won Un Certain Regard Prize at this year's Cannes Film Festival). 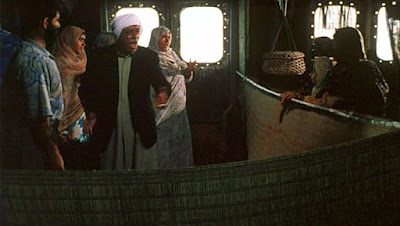 The biggest strength of Iron Island is Captain Nemat’s characterization and Ali Nasirian’s performance in the chief role (his acting credits go back to Darius Mehrjui’s 1969 masterpiece The Cow). The captain is as enigmatic and multi-faceted like the authoritative-gentlemanly ruler of a country. He treats young rebellious guy Ahmad as a surrogate son. Yet, when his authority is threatened, the Captain exacts cruel punishment on Ahmad in front of the public eyes (just like a twisted despot). Rasoulof maintains an ambiguity in the Captain’s actions. He looks both as a masterful manipulator and merciful protector. The director’s decision to avoid passing judgment on Captain Nemat keeps away didactic resolutions and allows viewers to bring their own interpretations. Mohammad Rasoulof's total command over the visual texture unearths powerful emotions within us. He often juxtaposes the image of lone ship, standing under bright skies with the bleak, rusted interiors of the ship, echoing the invisible nature of these poor people in the social stratification ladder. The slow-motion photography is used to great effects in the scene young men pushing down half-filled barrels of oil into the ocean and jump inside, swimming alongside the barrels to the shore. 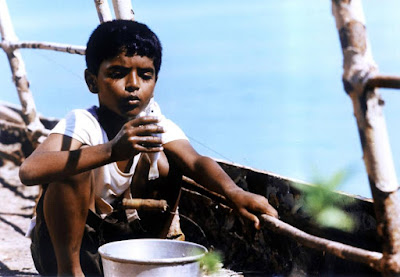 Director Rasoulof also offer symbolic touches through simple objects like a tied-up kite, chalk molded in bullet casings, metallic junk and battery-powered TVs. The director uses certain members of the impoverished community to provide beautiful visionary touches. For example, the old man constantly peers over the horizon looking for an unspecified thing and a smart boy who catches fish in the ship’s flooded parts and then tosses them back into the ocean. These two minor characters (along with other unknown members of the vessel) stands-in for the strong will of the exploited people, who keep on surviving despite the looming, hopeless situation. The final ambiguous shots of the minorities and poor trudging on the dry landscape remains as an elegiac poem for all the minorities and oppressed of the world, constantly kept in a state of migration.

Iron Island (90 minutes) is a must watch Iranian cinema for its potent commentary on the nature of totalitarian power and subjugation of people, according to religious and social status. The utter lack of sentimental pitfalls turns this film into a haunting and unforgettable social critique.