Take Off [2017] – An Engrossing Rescue Drama with a Big Heart 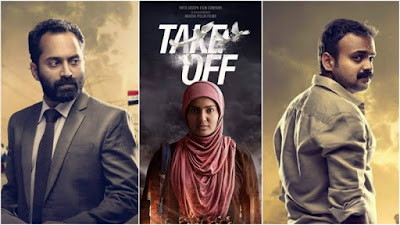 In Mahesh Narayanan’s riveting war-zone drama Take Off (2017), there’s a small character yet one who plays an important role in the narrative arc. He is a Saudi-based Malayalam businessman (named Jayamohan) who may possess the power to hold unofficial talks and free the devastated Indian nurses stranded in a Iraq hospital, at the mercy of IS terrorists. When the Indian Ambassador for Iraq approaches him for help, the millionaire businessman turns him away. But later at different points, he sees the nurses’ predicament over the news and hears their wail through a satellite phone call. What he sees and hears eventually tugs his heart enough to make the vital move. The scenes may seem out of place at some other language movies (especially European or American). The rich man (who deserves all due credit for his involvement) is clearly explained what’s at stake and yet he only allows himself to be swayed by emotions. That’s something very Indian. Although they often say ‘Indians wear the heart at their sleeves’, the sleeves need to be tugged at sometimes to act as per the demands of heart. In fact, Take Off is a movie full of heart. It’s a story of heroic women and men who attain that status without picking up any weapons. It delicately balances the know-how of the rescue operation with acts of humanity that’s not just born out under the covers of idealism.

Take Off is based on the 2014 rescue of 46 Indian nurses who were trapped in IS-held Mosul, Iraq. On a broader viewpoint, it’s a significant diplomatic victory in Indian history. But when observed little closer from the ground, there hails the intricate events and people with different temperament who led to the monumental rescue. Some of the freed nurses said in media that IS militants didn’t harm them and even treated them with dignity. Director Mahesh Narayanan reduces the number from 46 to 19 and shapes the drama according to cinematic essentials. Yet, the momentous element is that doesn’t turn the film into a one-woman show (as Akshay Kumar starrer did in Airlift –based on 1990 rescue of Indians from Kuwait). It touches upon the complexities involved in such an operation and even the small characters are well-fleshed out rather than being disposable narrative devices. 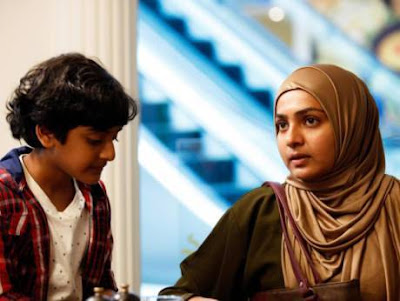 I am not a big fan of films that treat wars and bloody ethnic conflicts as a mere spectacle (a form of pop-corn entertainment). Indian films, particularly, strip off the complexities of a violent clash and reduce it into story of good vs evil or hero vs villain. Mani Ratnam’s technically magnificent and thematically annoying films like Roja (1992) & Bombay (1995) are perfect examples of this Indian film trend. Similarly Take Off’s protagonist Sameera (Parvathi), a nurse, is ailed by personal & economic problems to grab the chance to work in conflict-ridden Iraq. The pay is four times higher than their current salary. Sameera could pay off all her family’s debts. But she also wants get away to fend off depression. She has divorced from her husband Faizal who lives in UAE. Their eight year old son Ibru is unaware that his parents had been divorced. Sameera faces harassment in the working place and is stifled by patriarchal restrictions at home (which were the reason for her divorce since she is seen as too independent to fulfill the role of a wife). The new job may give her the coveted economical freedom and may lead her to the reunion with son Ibru.

Right from the start, it’s made clear that Sameera’s colleague Shaheed (Kunchacko Boban) is in love with her. She keeps a hardened face to discourage his courting attempts. But Shaheed is not the typical celebrated stalker of Indian/Malayalam cinema. He sensibly proposes his love and he seems like the right guy to support and encourage Sameera. When an uncle dismisses Sameera’s plans saying women shouldn’t travel alone to foreign countries, she eventually decides to marry Shaheed. It’s a marriage born out of necessity but slowly they discover love. Sameera, however, becomes worried when she gets pregnant. She dreads over Ibru’s reactions as he is about to visit her in Iraq during his vacation. Caught in all the web of personal problems, Sameera comprehends much more threatening troubles when the group of nurses land in Iraq. They are stationed in a hospital in Tikrit and the condition worsens day by day. Shaheed goes separately on a relief mission after the arrival of Ibru. The ensuing meaty part of the film chronicles the elaborate rescue operation led by Manoj (Fahadh Faasil), the Indian Ambassador to Iraq. 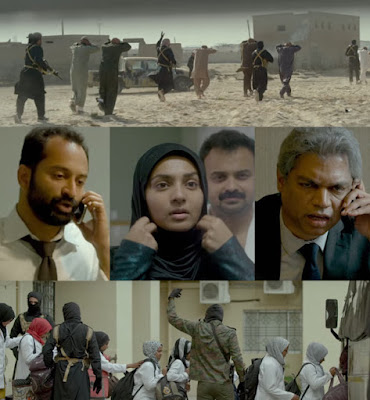 As I mentioned similar to Bombay, Take Off’s first-half starts with personal battles and second-half paves way to the real overpowering battle. But the central character and her conflicts are more sensibly written to keep us hooked as we wait for narrative shift to Iraq. Moreover, the horrors of human disgrace are kept at the forefront in the Iraqi portions. Director/writer Mahesh Narayanan (script co-written by P.V. Shajikumar) doesn’t spew out loud messages to terrorists. He doesn’t use the uplifting real event as a springboard to enlace jingoistic notions. Most importantly, the strict lines between good and evil are blurred at times to show how ignorance and apathy plagues the alleged ‘good’ side and how humanity brings different perspective to the alleged ‘evil’ side. Of course, it doesn’t mean that the script is entirely devoid of blunt approach. But such deft characterization and agreeable realization of the shocking conflict remains fairly good for Indian rescue or war-zone drama. Time and again, good Malayalam films communicate with our heart without resorting to melodramatic conventions. Parvathy’s gritty performance as Sameera reflects this. She effortlessly expresses Sameera’s despair and dilemmas. The character isn’t written and Parvathy doesn’t play it as the proverbial ‘idealistic’ character. She has a fine knowledge on when to go for emotional upheaval and when to keep it subtle. Apart from Fahad Fasil fantastic supporting performance, special mention must be made about the film’s production design. It’s a great achievement considering its small budget and adds to the atmospheric dread, finely wrought by director Mahesh.

Bound by crushing restrictions and frustrating powerlessness, Take Off (139 minutes) is a journey of a woman winning over the internal and external conflicts with a great display of integrity and compassion. Thanks to Parvathy’s outstanding performance and Mahesh Narayanan fascinating directorial debut, the film takes off with ease.

Take Off (2017) -- IMDb
at July 13, 2017
Email ThisBlogThis!Share to TwitterShare to FacebookShare to Pinterest
Labels: 2017 Movies, Based on True Story, Indian Cinema