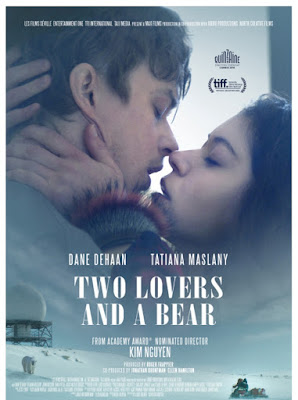 Canadian film-maker Kim Nguyen’s Congo-based war drama War Witch (aka Rebelle, 2012) was pretty successful in the art-house circuit. It received Oscar nomination for best foreign-language film and won ten Canadian Screen Awards. Kim Nguyen has already gained the reputation of being an unpredictable film-maker. His three films before War Witch were entirely different from each other, in terms of theme and form. His latest and first English language film Two Lovers and a Bear (2017) looks remarkably gorgeous, yet unclassifiable. It’s a passionate love story with lot of unpredictable and surrealistic elements. Nguyen’s $8 million indie drama was filmed in Iqaluit, Capital city of Canadian territory Nunavut, near the North Pole. Iqaluit is a small, isolated Arctic community which you can dub it as ‘the end of the world’. The film’s central theme is about how two star-crossed lovers deal with past trauma and grief. But director Nguyen shuffles between different tones (includes Herzogian manic journey & a talking polar bear among other things) in the narrative that it is as unpredictable as the story’s wintry landscape.

Roman (Dane DeHaan) and Lucy (Tatiana Maslany) are two lost souls whose ardent love for each other keeps their bodies and souls warm. They drive through the sparsely populated community in their snowmobiles, catching fishes and doing some infrastructural jobs. In the evening, Lucy works as a cab driver. What they do isn’t elaborated much and their traumatic past was hinted upon. Lucy is wary about what the present holds for her. She is evidently uneasy when she gets a chance to return back to university and pursue biology. Lucy has to leave in two weeks. Roman is stubborn in his decision to not return back to South; to his dirty past. Roman decides their romance is finished. He wallows in self-pity, drenches his soul in drink to assuage the pain, and when it fails, he sits on the floor with shot-gun rifle pressed at his jaw. Lucy attempts to comfort him, but he chases her away. Earlier, while shooting off few rounds in the frozen street, a polar bear passes by. Roman and the bear have a friendly chat. Similar kind of conversation unfurls at other points of the narrative too.

The chat with the bear, of course, isn’t insisted as a mere hallucination (since a small boy and later Lucy herself sees the bear). It’s the kind of jokey surrealism and the wisdom which bestowed by the bear reflects Roman’s innermost feelings. A local sheriff saves Roman from killing himself and he sends him to a rehabilitation center. To prove her love, Lucy takes the costly trip to visit Roman in the city; spending her savings for 20 minutes of physical and emotional intimacy. Soon, the two lovers decide to break out on their snowmobiles through the daunting white terrain in order to reach the South. Can the callow love survive the journey of deadly extremes? There are quite a few unexpected and jarring turns in this later-half. Kim Nguyen’s dramatic flourishes don’t always pay off -- his inclusion of deadpan humor and horror-tinged episodes doesn’t blend well -- yet what’s undeniable is the deeply moving beauty & power of the imagery. 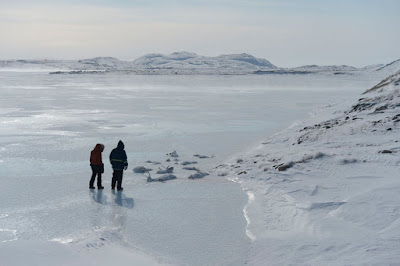 Two Lovers and a Bear is the kind of tonally erratic movie with a very thin plot-line which is destined to be hated by viewers seeking light-entertainment. Of course, it’s a very flawed film with a hackneyed backstories and unfitting surrealism. The possibility of turning this material into a great film was well far from being realized. Despite its missteps and pseudo-profundity, Kim Nguyen’s direction provided pretty vibrant and compelling movie experience. The subtle ecological subtext of Nguyen, breathtaking cinematography by Nioclas Bolduc, and the magnificent brooding performances of the two leads are the decisive elements which provides somewhat enjoyably & immersive viewing experience. Nguyen contrasts the beauty of natural setting with debris, piled-up high due to man’s settlement. Through the people living in the small community, the director hints at multi-cultural nature of the land. In fact Nguyen calls ‘Iqaluit’ as the ‘really concentrated representation of our world’. At its core, the lovers’ journey exhibits the pursuit for freedom in an increasingly homogenized world.

However, not all of Nguyen’s artistic impressions provide favorable results. For example, the bizarre episode in the abandoned military base breaks off the subtlety of the dramatic-ground. Among the most memorable of Nicolas Bolduc’s image is the shot of group of caribou frozen solid while crossing a river. The image itself is so powerful enough to make us draw parallels between Caribous’ fate and the possible fate of the lovers. Yet, Nguyen draws out a long, unsubtle conversation scene about Caribous’ destiny. The observation of the interlaced silence between the lovers proves to be remarkable than such conversations. The sex scenes were convincingly filmed, strongly hinting at their deep emotional discomfort. 'Orphan Black' fame Tatiana Maslany and Dane DeHaan easily forges an emotional connection with us to root for them. Their sexual spark and chemistry deftly carries some of the film’s heavier moments.

Two Lovers and a Bear (96 minutes) is the nuanced tale of two emotionally wounded lovers who seek refuge in each other to escape the haunted past. Although the narrative’s unexpected elements doesn’t always work to its advantage, it remains as an oddly compelling experience.

Two Lovers and a Bear (2016) -- IMDb
at July 31, 2017
Email ThisBlogThis!Share to TwitterShare to FacebookShare to Pinterest
Labels: 2017 Movies, Romantic Cinema