The Rider [2018] – The Broken Dreams of a Resilient Cowboy 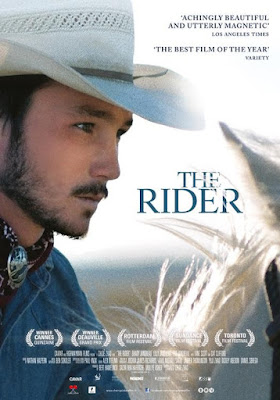 The movies made by women film-makers often get caught up in gender politics and feminist readings that viewers and critics alike tend to talk less about the distinguishing attributes of the films itself. In turn, audiences sometimes get surprised when female directors deliver a cinematic flavor which has nothing to do with women’s world. The implicit meaning behind questions like: ‘how did a woman make this?’ is definitely a roundabout method of belittling the director’s talents. The Rider (2018), made by Chinese film-maker Chloe Zhao, would incite such surprised reactions. Primarily, because the movie is about an angst-ridden professional rodeo, hailing from the indigenous community of Pine Ridge Reservation. Chloe Zhao takes up the classic American Western character -- the cowboy -- and reconstructs his hobbled masculine persona in a tender and poetic manner rarely experienced in cinema.

The film opens with the 21-year-old protagonist Brady Blackburn (Brady Jandreau) waking up and removing his stapled-bandage to reveal a nasty head injury. He covers his half-shaved head with a polythene sheet and takes a shower bath. We soon learn that Brady is a gifted rodeo cowboy and horse trainer, living with his financially stricken father (Tim Jandreau) and mentally-challenged 15-year old sister Lilly (Lilly Jandreau) in a trailer in South Dakota’s Pine Ridge Reservation. Now with the metal plate in his head, Brady’s bronc riding days are nearly over. At home, he often clashes with his father who sells Brady’s beloved horse to pay off debts. He receives love and support from his sister and rodeo pals. But giving up the one thing that brings meaning to his life deepens Brady’s inner turmoil. The alternate to abandon the dream of being a cowboy and horse trainer is getting committed to a soulless low-end job at the local supermarket. One of the symptoms that reveal the extent of Brady’s brain damage is the way his right-hand fist gets clenched unconsciously, making it hard to let go of whatever thing he’s holding onto (of course, a clever metaphor for Brady’s quandary over letting things go). Subsequently, forging a new identity and conquering the sense of incompleteness is nearly impossible in this land of limited opportunities. 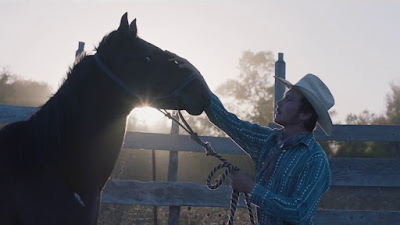 What’s wondrous about The Rider is that the cast members are full of non-professional actors who have been recruited to play a variation on their own lives. There’s not much difference between off-screen Jandreu family and the on-screen Blackburns. Brady Jandreau has suffered a head injury in 2016 and the seizures, metal plates are all taken from his reality. Surprisingly, there’s not a single amateurish note in the acting. Moreover, the unsensational approach and sensitivity director Zhao brings to the docu-fiction reminds us of Abbas Kiarostami’s Close-Up (1990) and Koker Trilogy (very recently Italian film-maker Jonas Carpignano hired members of Romani community to play a fictionalized version of themselves in his tender coming-of-age tale ‘A Ciambra’). Zhao studied film-making in US and her debut feature, “Songs My Brothers Taught Me” (2015) was about a Lakota Sioux girl, Jashuan and her older brother living in the stark yet beautiful reservation lands. In fact, Zhao’s acquaintance with many tribes in the Indian reservation pushed her to present a version of Jandreaus’ story.

The Rider largely works due to Zhao’s astonishingly restrained and mature film-making style. There’s none of the extraneous efforts to tug your hearts, just for the sake of it. In her effort to put together a version of Jandreau’s real-life, Zhao includes fellow professional rider/big brother Lane Scott in the narrative. Lane, once a rising rodeo star is now confined to wheelchair after his grave on-the-arena accident. Brady often visits Lane at the rehab center and the two watch YouTube videos of Lane’s bronc riding days. Zhao smartly steers clear from the melodrama in these scenes and deftly focusing on the camaraderie shared by these two guys (Brady communicates with Lane in sign language, which he must have learned after Lane’s accident; a detail that’s sprinkled casually). Director Zhao conveys much of Brady’s emotions through detailing. The affectionate close-ups employed to capture Brady dressing up in cowboy costume (tying up kerchief and wearing the perfect cowboy hat and all) before meeting Lane painstakingly conveys the character’s emotional connection without any expository dialogues. 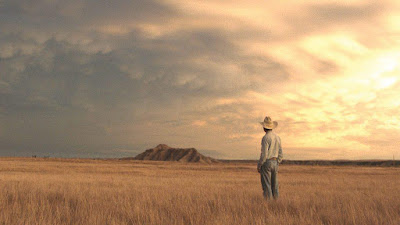 Teaming up with cinematographer Joshua James Richards ('God's Own Country'), Zhao scores high on weaving gorgeous visuals. They render the plains of South Dakota in an innately compelling manner which reminded me of Terrence Malick’s Days of Heaven (cinematography by Nestor Almendros). Much of the picturesque vista showcases the dusk, gently hinting at the possible twilight of Brady’s rodeo career. Although Zhao has meticulously arranged the series of indelible images to zero-in on Brady’s inner conflicts, the film’s greatest scenes are the unscripted ones; especially, Brady’s horse-training sessions (the camera’s lingering gaze is fortified with empathy). Filmed in graceful, long-takes, the director simply observes the central character’s spiritual liberation while being with the horses. Interestingly, only in these moments we know for sure that Brady isn’t an actor. We understand this is a guy whose identity is entwined with the lives of these animals. At other occasions, Brady Jandreau expertly conveys the anguish of his severed connection with nature. But it’s not acting as much as being himself. And, it’s not just Brady, sister Lilly and father Tim also instinctively express their feelings (in the case of Lily it is very natural). The scenes between Brady and Lily are poignant to the core (the girl making up songs with a spontaneity and singing it in an angelic voice are inherently charming). In fact, Brady’s care and love for Lilly provides the strong reason for why he needs to re-discover himself.

Some might find the social context (compared to the other brilliant ‘horse-and-boy’ film Lean on Pete) to be very thin. That’s not a problem, since The Rider is largely a personal journey and a poetic expression of crisis-ridden masculinity. Its biggest achievement is balancing the cinema verite style of documentary mode and lyrical constructions of fictional mode. It’s authentic as well as fabricated, and both these facets incredibly mix together to offer a deeply moving experience. Eventually, The Rider (98 minutes) is universal as well as specific: on one hand, it’s about the irreparable gulf between a man’s desire and his stark reality and on the other hand, it observes the rodeo cowboy’s way of life without either exaggerating or downplaying their inner turmoils and difficulties.