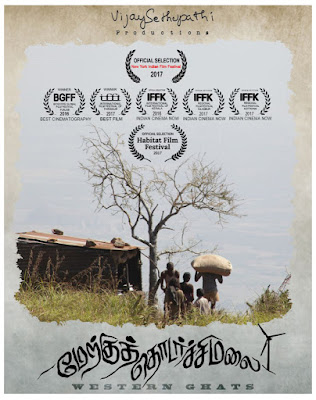 For the past decade or so, Tamil cinema despite the heightened excesses – violence, melodrama, didacticism – is consistent in staying true to the state’s cultural, political, and economic reality. Lenin Bharathi’s Merku Thodarchi Malai (‘Western Ghats’, 2018) stands as yet another testament to new wave of Tamil film-makers’ impulse for making naturalistic slice-of-life dramas. Merku Thodarchi Malai (produced by actor Vijay Sethupathi) deserves more attention (among similar contemporary Tamil films) since it is less concerned about plot mechanics and more invested in documenting life lived amidst the gorgeous mountain ranges. It’s more or less an anthropological record, which could only be relished by our willingness to watch and listen as the people on-screen reveal themselves: their life, rituals, and passion. Although there are certain questionable elements of melodrama, the film largely stays away from overtly sermonizing the trials and tribulations of under-served, landless rural poor.

While most films open to swiftly establish its characters and conflicts, Merku Thodarchi Malai slowly establishes the grace and beauty of its landscape alongside the lively dynamics between hillside villagers. The early scenes are set in still-dark early morning in the hamlet of ‘Thevaram’ (on the borders of Kerala and Tamil Nadu), as the central character Rengasamy sets about doing his routine tasks. He rinses his face using the water from steadily flowing rain. He bathes, chats with his mother about finalizing the deal on the land. He walks a lot and engages in idle chatter with other anonymous villagers in tea shops, in the curvy hilly paths, etc. The villagers’ livelihood revolves around carrying heavy sacks of cardamom from the rough terrain of peaks to the plantations. Rengasamy has saved money from these arduous trips so as to realize the dream of owning a land and be a farmer. The thin plot chronicles how this personal dream fares amidst the encroaching outside forces.

Although Merku Thodarchi Malai tells a very familiar, bleak story of capitalism, its soul rests on the vibrant display of cultural and regional specificity. The film is absorbing for what it reveals about the culture of the people of Western Ghats, as well as the practical aspects of their everyday life, where the land and nature is as much a living force as the villagers. Director/writer Lenin Bharathi also focuses on the myriad of small stories which reveals different facets of life and beliefs in Western Ghats. The early uphill trek of Rengasamy to the plantations is detailed in a brilliant manner, the intimacy of the production calms us into accepting it as an observation of real life. The people seem sincere, honest, and revealing as real people might be. The zealous and stubborn old man carrying the cardamom sack, the mentally afflicted woman haunted by her loss, the religious belief in carrying a small stone to the mountain top, and similar such refined vignettes presents us a grueling and often ravishing document of life in the foothills. 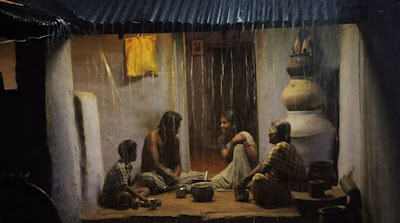 Cinematographer Theni Easwar’s wide nature shots offer something sublime in its simple gazes. The eagle-eye shots, showing the men carrying sacks like uniformly moving ants, are wondrous and heartrending.  Lenin Bharathi & Easwar subtly refers to the ruthless practices of capitalism without resorting to lengthy crowd-pleasing dialogues. What roads (tourism) and homogenization of farming practices does to these communities is gently touched upon without taking up a particular judgmental stance. A shot of government provided freebies – table fan and TV – and the lingering shot at the back of a van, bearing the stickers of various enterprises of a real-estate developer, tells something deep about the times we live in than the instructive words. At times, the camera generates the sense of poignancy the cast of non-professional actors fail to do so. If there’s a flaw in the narrative, I think it chiefly rests in the transitions between documentation mode and dramatic mode. The second-half that’s preoccupied with passage of time (as opposed to the first-half’s sense of timelessness) tries to portray the injustices directed towards the central character Rengasamy. The meek villager is tried to be transformed into a protagonist of sorts. But, Rengasamy’s life, punctuated with tragedies, doesn’t seem as absorbing and distinctive as the earlier portions. Moreover, during those melodramatic parts, the legendary Ilayaraja’s music strives to underline the emotions to be felt, whose graceful notes are otherwise sensibly used (though the emotional overflow might be consciously included to not entirely turn this into a art-house feature).

Eventually, Merku Thodarchi Malai’s splendid mastery is evident from merely observing the first and last scenes (or shots). The briskness in the young man’s walk is replaced in the end with a passivity and nonchalance. The rain and chatter in the opening shots, for all its noise, produces a soothing effect. But the unagitated, steady zoom-out shot of wind turbine-riddled landscape in the movie's final shot invokes an unsettling feeling. Ah yes, ‘Progress’ has come to the remote hills and its people!