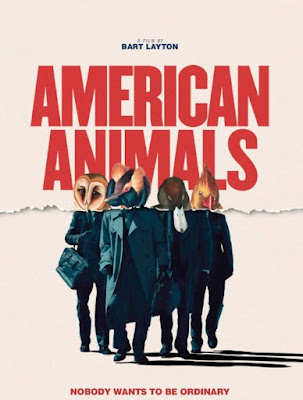 We all have our fantasies that we hope would by-pass the hardships of life and puts us directly in the path towards prosperity. Maximum wealth through minimum effort has oft been the misguided mission of many. Nevertheless, a lot of us can well-judge the demarcation point, which stops us from switching to the action mode so as to strive for the ludicrous wish-fulfillment fantasy. We can enjoy all these well-crafted old & new heist/robbery sequences, savoring the display of criminality with popcorn and beverages. But what if some frustrated, alienated youngsters who feel ‘special’ like the heroes of heist flicks doesn’t understand that you can’t attain self-fulfillment at the expense of committing a crime? Then it’s a truly a recipe for disaster. Earlier in Bart Layton’s fascinating true-crime drama American Animals (2018), the camera pans a DVD shelf containing heist classics like “Riffi”, “The Killing”, “Reservoir Dogs”, “Point Break”, etc. The thrill-seeking college kids binge-watch it for education as well as motivation. But once their preposterous plan is set in motion, they confront turbulent emotional reality which thwarts their fantasies in a matter of minutes. American Animals is refreshing because it starts off like any caper flick and slowly switches gears to dissect and critique how pop art persistently lauds criminal behavior.

Based on the 2004 real-life crime, which was dubbed in the media as ‘Trans Booky Heist’, documentary film-maker Bart Layton’s first narrative feature ‘American Animals’, assembled with slick visuals and cool music, recreates the events that led four college kids of privilege to steal a rare-book collection at Lexington, Kentucky’s Transylvania University library. Art student Spencher Reinhard (Barry Keoghan) hates his fraternity, college life, and embraces his outcast status. He yearns for unique life experience and staunchly believes that only suffering can lead to the creation of great art. Spencer’s only friend is brash and eccentric Warren Lipka (Evan Peters), who is in college with his athletic scholarship and is also seeking for life-altering experience. During a visit to the University’s Special Collection Library, Spencer’s attention is grabbed by the prized works: naturalist John James Audubon’s “Birds of America”, rare first edition of Charles Darwin’s “On the Origin of Species”, etc. Audubon’s book alone is valued at $12 million, which is held in a glass-case, the key to its lock is held by the old librarian/archivist (Ann Dowd). 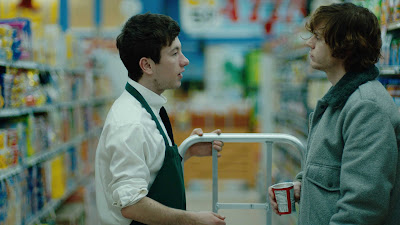 The robbery plan gets more serious and elaborate. Warren supposedly meets up with a ‘fence’, who points to a potential buyer at Amsterdam. Considering the intricacies involved in the robbery, Warren recruits two more in the team: a loner with an ambition to join the FBI, Eric (Jared Abrahamson) and super-rich fitness freak Chas (Blake Jenner). The four have a great time planning the robbery, right up to the elderly men disguises. Then comes the ‘Day of the Robbery’ where their fantasies are shredded by jangling nerves and the inescapable weight of reality. The result of heist and the fate of the quartet could be comprehended early in the narrative. Because, the narrative is interspersed with documentary-like snippets as the real-life culprits, now in their early 30s, look back at their self-centered youthful selves (the snippets also includes the four guys’ family members; an approach bit similar to ‘I, Tonya’, but there the reflection is done by older selves of actors itself). The reason for this narrative choice is simple: to flex the thematic muscles more sharply. 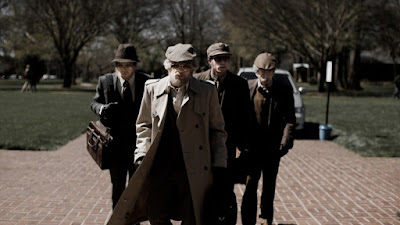 For me the starting and ending of American Animals seemed a bit overwrought. The assemblage of supposedly kinetic imagery to realize the character and their real-life counterparts felt to be overdone. The ending also has ‘in-your-face’ moments, conveying the sociopolitical commentary among others with no subtlety whatsoever. Even so, the movie gets right the youngsters’ superficial concerns about life and the later robbery-day panic. Layton, particularly, builds great tension during the robbery sequences, imbuing it with perfect emotional authenticity. Even if we know the results of the heist, the details of the quartet’s downward spiral unfurls with high-wire tension and dark comedy (‘the elevator mishap’ moment is so hilarious, irrespective of the characters’ despair). Director Layton smartly avoids farcical tone during the robbery and post-robbery scenes, bringing up the narrative’s lamentable dimension to the surface.

A lot of Layton’s metaphorical handling is mostly obvious: from its title based on Charles Darwin’s observations about a curiously evolved bird (native to Kentucky) to Audubon’s description of colorful, savage birds juxtaposed with four guys’ palpable fear of getting caught. Layton, however, shows good judgment in allowing many questions (with respect to details of heist) go unanswered. It is to say that regardless of the details attested to the narrative, the despair and misplaced sense of joy faced by the characters are very real and true. Furthermore, the director’s cool nods (established through crafty editing) to heist scenes (Ocean’s Eleven, Reservoir Dogs, The Dark Knight) are devilishly entertaining. In fact, much of the youngsters’ conversation mimics the dialogues from pop art (“This is your red pill/blue pill moment”, Warren says while recruiting Eric). The performances from Keoghan (‘Dunkirk’, ‘The Killing of a Sacred Deer’) and Peters (‘American Horror Story’) are riveting, although I felt their characters are not fully fleshed-out and their motivations not impeccably accounted for. In addition, Jenner and Abrahamson, who play co-conspirators, are very thinly characterized. With more keenly observed characterization and deep symbolism, American Animals (116 minutes) would have been a stupendous work of the true-crime genre. Nevertheless, for now it’s an engrossing study of privileged yet purposeless youngsters swindled by the mirage of 'American Dream'.