Upgrade [2018] – A Pulpy and Darkly Funny Tale of Vengeance 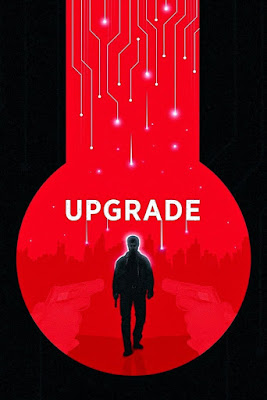 Writer/director Leigh Whannell’s Upgrade (2018) is a mid-budget sci-fi/thriller that borrows lot of elements from the 80s & 90s cyberpunk flicks, and sprinkles Black Mirror’s ‘beware-of-digital-world’ message on top of it. It has a good atmosphere, inventive gory action scenes, and a fairly captivating every-man protagonist. Of course, there are logical leaps and overplays its hand a bit in providing the grim futuristic vision, but it delivers some riotous fun, comparatively more than the average summer blockbusters. Leigh Whannell is director James Wan’s favorite screenwriter (Saw, Dead Silence, Insidious franchise) and he had made his directorial debut with the 3rd chapter of Insidious. With Upgrade, Whannell has tried to tackle a more ambitious, genre-bending project that gets points for witty script and visceral action.

Logan Marshall-Green of The Invitation (2016) plays Grey Trace, a stubbled, hyper-masculine, old-school mechanic. In this near-future digital world full of self-driving cars, smart houses, and cybernetic organisms, Grey remains a Luddite, watching the technological innovations enveloping his surroundings with innate suspicion. Despite the doubts over alleged utopian human-machine systems, Grey has married a hotshot worker in the cybernetic field named Asha (Melanie Vallejo). In few brief moments, Whannell conveys the mutual love between the couples, regardless of their contradictory stance on digital world. Soon after this character-building, Grey takes Asha for a ride to drop a car at the bizarrely-structured lair of a smug, billionaire technocrat, Eron Keen (Harrison Gilbertson). On return, a mysterious error in the automated car lands them on the wrong end of the town. The waylaid couple is attacked by a gang of thugs. Asha is brutally shot down and Grey wakes up a quadriplegic, wheel-chair bound for life. 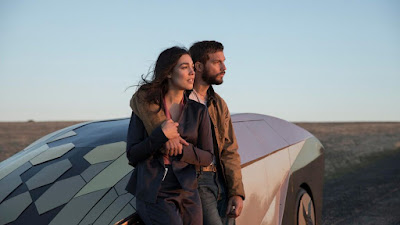 Grey is determined to bring the killers to justice, but the investigation led by a well-meaning detective named Cortez (Betty Gabriel) doesn’t seem to have produced any results so far. While wallowing in the sea of post-traumatic stress, Eron offers help in the form of STEM, a surgically implanted computer system, which may restore the severed connection between Grey’s brain and his body. Eron simply wants Grey to be a guinea pig to test the efficiency of STEM, before making it into a marketable product. The resulting operation allows Grey to walk again. However, Eron asks to keep it a secret and thus Grey confines himself to wheel-chair outside the house. Unlike the 'Robocop', Grey doesn’t seem to have an inherent lust for revenge, up until the STEM begins to talk, a voice that’s  a mix of Alexa & HAL (voiced by Australian actor Simon Maiden). When requested, the implanted AI offers observations and advice. It also single-handedly uncovers a pivotal clue about the murderous gang members’ identity. Most importantly, if Grey hands over control of his body to STEM, it executes cool martial-arts moves to brutally kill his knife-swinging, gun-wielding foes. STEM’s killing spree seems to make Grey’s newfound thirst for revenge easy. Alas, a harsh truth is finally revealed which leaves Grey powerless and aghast. 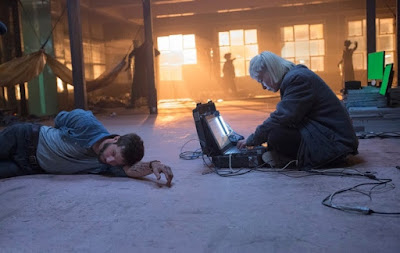 Upgrade is at its entertaining best while harnessing the right amount of comedy and style out of the action scenes. The increasing estrangement between Grey and his own body bring forth an interesting kind of physical humor. Similar to Craig Zahler’s (Bone Tomahawk, Brawl in Cell Block 99) intriguing blend of genres and solid visceral punch, director/writer Wahnnell’s frantic and incredibly fast action sequences will certainly infuse an immediate visceral thrill on viewers. The director’s skillfulness in deploying the comedic action, however, isn’t found in his critique of AI-dominating dystopia, where the man’s free will is expunged by his own hands. Even the climactic twist seems a bit iffy. But again, Upgrade wouldn’t be seen for the profundity of its message. It would be sought out for the unapologetic, adrenaline-rushing, schlocky tone, which is sincerely delivered.

Despite the minimal budget, Whannell cooks up some impressive special effects and vividly realized locations. Most of the other cat-and-mouse games surrounding the crazy action are familiar and falls flat; particularly, the conflict between the detective and Grey is tiresome. Marshall-Green’s precisely executed physical performance assuages some of the stiff writing. The horror, guilt as well as contentment that lights up Marshall-Green’s face after STEM disemboweling the goons is a delight to watch. Overall, Upgrade (100 minutes) is a smartly packaged blend of b-movie violence and retro sci-fi narrative that manages to concoct a heap of gruesome fun. It’s a tale of revenge best served by a wronged man’s inner cyborgian butler.

at August 18, 2018
Email ThisBlogThis!Share to TwitterShare to FacebookShare to Pinterest
Labels: 2018 Movies, Thriller