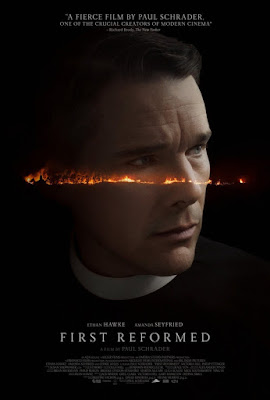 Man’s inner turmoil and his subsequent quest for spiritual redemption has always been the central theme of Paul Schrader, one of American cinema’s important screenwriter and director. Right from his early work as a screenwriter in Martin Scorsese’s masterpiece Taxi Driver (1976) to his spectacular directorial ventures like Hardcore, Mishima: A Life in Four Chapters, American Gigolo, and Affliction, Mr. Schrader has had an abiding interest in alienated, lonely figures, struggling to achieve spiritual salvation from their repressive surroundings. In fact, Paul Schrader’s pet themes are very evident in the early image of Travis Bickle, the protagonist of Taxi Driver with a raging existential crisis; he sees the urban decay through his taxi, a sort of metal coffin symbolizing his extreme isolation. Now the legendary screenwriter returns with another somber portrait of a spiritually tortured individual, weighed down by feelings of guilt, despair and emptiness.

First Reformed (2018) could be considered as Schrader’s best feature since Affliction (1997), if not one of his career best. He takes all of his blistering pet themes and suffuses into 21st century concerns related to environmental degradation, moral corruption, political radicalization, etc.  First Reformed revolves around a grizzled priest (Ethan Hawke in a career-high performance), battling his inner demons. The basic premise and the fragmented, austere visual space (shot in 1:37:1 aspect ratio) immediately make us cinephiles remember two great works of the masters: Robert Bresson’s Diary of a Country Priest (1951) and Ingmar Bergman’s Winter Light (1963). Besides these cinematic references, Schrader tackles the transcendental motifs of Andrei Tarkovsky (especially, The Sacrifice). Toller is a pastor in name only, since the New York Dutch colonial-style church ‘First Reformed’ (built in the year 1767) serves as a local tourist attraction. Deemed as a ‘souvenir shop’ by the locals, Father Toller doesn’t have much of a congregation. Nevertheless, it’s the kind of easy gig the heavy drinking, 40-year-old divorcee Toller can keep up with. 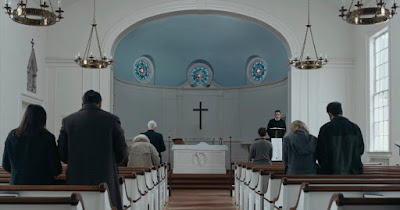 In the gloomy evenings, Father Toller isolates himself in his sparsely-furnished abode to write a journal, in order to examine his faith and emotional pain. Toller intends to ‘shred & burn’ the journal after a year. It’s a sort of confessional written with a whisky bottle at close, which ought to serve as a mental therapy. Toller’s assignment to ‘First Reformed’ Church was provided out of pity (due to Toller’s personal tragedy) by Reverend Jeffers (Cedric Kyles), who oversees a mega church (named ‘Abundant Life’), which indirectly assists the confluence of business figures, politicians, and other powerful people. One day, one of the very few members of the congregation approaches pastor for counsel. The member is pregnant Mary (Amanda Seyfried in a bit underused/underwritten character), who invites Toller to speak to her despairing husband Michael (Philip Ettinger). Michael is a radical environmentalist, who engages in a theological debate with Toller on how he could bring a child into this stark world that's gradually but steadily pushing itself towards apocalyptic environmental disaster. “Will God forgive us?”, the question posed by Michael echoes in Toller’s mind and coerces him to look into the void. In fact, the pastor’s grievances swiftly escalates after Michael’s tragic decision and when he learns about the crooked oil corporate bankrolling the church. As the 250th anniversary of the ‘First Reformed’ church comes close, Toller contemplates about committing an extreme act to purge the senselessness and apathy of the world at large.

Although a tale of spiritual and existential malaise, writer/director Schrader charges the narrative with black humor, observing the little affronts heaped upon Toller with a deadpan delight. Weekend visitors to the Church seem to be more interested in its gift shop souvenirs (t-shirts, caps, etc) than in its historical importance or unique architectural design. Reverend Jeffers berating Toller for not accepting the realities of his situation (“You’re always in the garden, even Jesus got out of the garden”) was another one of quietly amusing moments in the narrative. There are also several incisive moments where Schrader connects his audiences to the central perturbing question: “How can God forgive what humans have done to his creation?” From the deliberately pointed moment of Toller reminiscing to little school kids in the basement trapdoor that was once used for Underground Railroad (a network of safe-houses established during the 19th century by abolitionists to aid the escape of African-American slaves to Canada and other free American states) to confronting environmental degradation and monetization plus marketization of religion, the movie deeply grapples with moral vacuum stirred up by global economy demands. 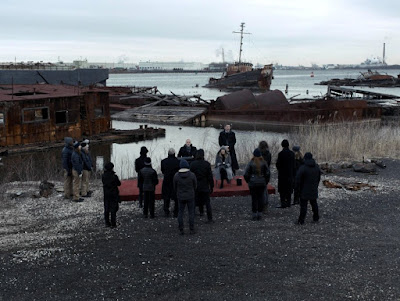 It all may make First Reformed sound a bit preachy. But Schrader largely channelizes the social and moral concerns through the very personal collapse of Toller’s resolute inner-self. Mr. Schrader artfully locks us within Pastor Toller’s head-space that it becomes hard to not vex over the world that's seen through his eyes. And hence the grim radicalization of Toller raises more genuine concern even more than the sociopathic leanings of Travis Bickle (though Toller says to Michael, “Wisdom is holding two contradictory truths in our minds simultaneously”, he keeps on falling into the chasm). Moreover, despite the ambivalent, slightly positive ending there are no concrete resolutions to be found, only more thoughts to reflect upon.

Overall, First Reformed (113 minutes) is an enraging and bewitching work on a individual’s crisis of faith, awakened by the world hell-bent on its own environmental and social destruction.

Yes, it does sound grim and depressing!